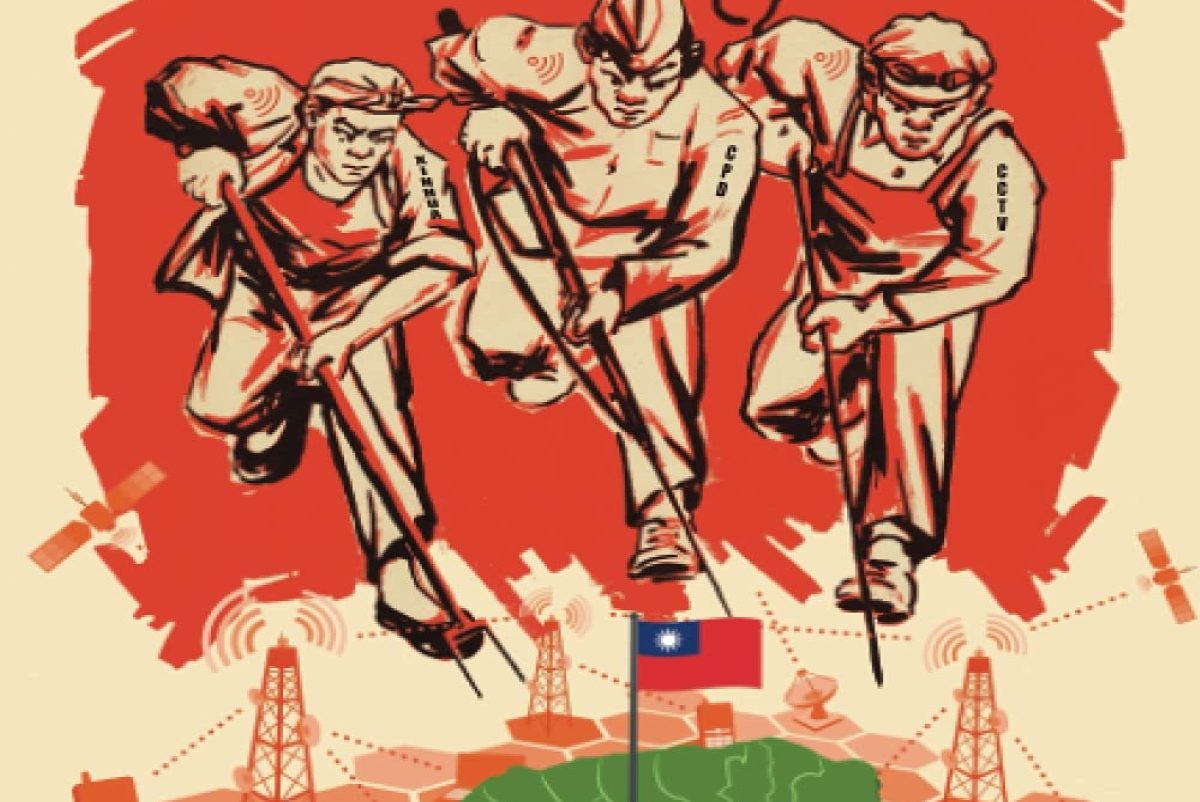 Can the People’s Republic of China (PRC) invade and conquer Taiwan? Experts differ, but 99% of the current debate considers only the military balance – and whether the PLA has the weapons, hardware, and capabilities to get ashore, defeat Taiwan’s military and force Taiwan to surrender.

The military matchup is important, but it misses half the picture – and half of the PRC’s strategy against Taiwan.

Professor Kerry Gershaneck’s new book, Media Warfare: Taiwan’s Battle for the Cognitive Domain (Independent, October 2021) details and explains a key portion of that “other half”: the PRC’s use of “media warfare” to psychologically fracture and demoralize Taiwan and make conquest easier. Or even better, to have Taiwan give up without a fight.

Gershaneck knows the topic well, having vast Asia experience and hands-on strategic communications experience at all levels of the U.S. government. He also possesses a particularly useful counterintelligence background.

The Battle Between the Ears: Chinese ‘Media Warfare’ against Taiwan (and everyone else)

This time, Professor Gershaneck focuses on what China has done and is doing to Taiwan on the “media warfare” front. As important, he lays out how Beijing is waging the same type of insidious warfare worldwide – especially against Taiwan’s main ally the United States.

To Chinese strategists, media warfare (and the broader political warfare effort of which media warfare is part) is just as important as building the PLA into a force able to defeat the U.S. military. Indeed the kinetic and the “informational” are considered mutually reinforcing lines of attack.

Media warfare – also known as “public opinion warfare” ー leverages all instruments that inform and influence an adversary’s public and government opinion. The objective is to weaken, divide, corrode, confuse, co-opt, and demoralize an opponent.

What are the instruments? The old standards, such as television, radio, and newspapers, of course. But there are also books, textbooks, and over the past three decades the Internet and social media.

Indeed, the Chinese communists make full use of all of these. And they are particularly aggressive on the internet/social media vectors.

This makes sense. With newspapers, TV, and radio, a propagandist has to somehow lure the intended target to receive the message. With social media and the Internet it is possible to jam the message into the target non-stop ー 24/7/365. And given that 90% of Taiwan’s public is active on social media, that democracy presents a particularly target rich environment.

What does the PRC’s media warfare campaign against Taiwan look like? In order to deliver its messages, Chinese entities have bought Taiwanese broadcasting outlets and newspapers, and use the lure of advertising dollars against independent outlets.

Another key part of the effort to shape the views of as wide an audience as possible is the aggressive use of social media platforms to influence, confuse, and deceive. This is often accomplished through effective profiling of users to better target messaging.

How successful has Beijing been? In 2018, the PRC deployed media warfare stratagems – including heavy use of social media – to engineer the election of an absolute nobodyー Kuomintang Party (KMT) candidate Han Kuo-yu ー as the mayor of Kaohsiung, Taiwan’s second largest city. Many in the KMT support communist China’s plans to annex Taiwan.

The surprise election of Han to this powerful mayorship was no small feat and no minor issue. Kaohsiung has historically been a stronghold of the ruling Democratic Progressive Party (DPP) that firmly opposes annexation by China.

As part of the effort to elect Han Kuo-yu, pro-Chinese Communist Party (CCP) media in Taiwan and the communist propaganda organs in China relentlessly attacked DPP leadership, including President Tsai, with disinformation and untrue allegations. That relentless campaign interference was enough to raise doubts with voters, especially because there were no effective means in Taiwan to detect and counter the media warfare attacks.

Han had a fair shot at winning. However, two things happened.

First, Taiwan’s government woke up to the media warfare threat and cobbled together effective-enough defenses to derail and expose Beijing’s strategy. Second, the Chinese communist crushing of Hong Kong’s pro-freedom movement a few months before Taiwan’s election awakened a huge chunk of Taiwan’s public to the Chinese threat – and inoculated many to Chinese subversion.

Professor Gershaneck provides a concise, yet detailed introduction to Media warfare in Taiwan, but with larger implications. He walks the reader through the confusing and redundant terminology and explains how media warfare fits into the larger Chinese political warfare strategy – intended to defeat an enemy via all measures short of outright kinetic warfare.

While using Taiwan as the focus of his latest book, the professor emphasizes that what the PRC is doing to Taiwan it is also doing to the United States and other free nations.

The professor wrote his most recent book to help Western nations “better detect, deter, counter, and defeat” Chinese media warfare – and political warfare writ large. And he provides a set of practical recommendations for Taiwan’s government that are applicable to any country under PRC media warfare attack.

For example, Chinese state-controlled media (which is every media entity operating in China) has formed strategic alliances with Western media. The New York Times, Washington Post, and even the “conservative” and “tough on China” Wall Street Journal carried China Daily media warfare inserts for a number of years.

Gershaneck also describes how the Chinese government takes control of newspapers and broadcast media serving the Chinese “diaspora” in many, if not most, countries.

And, at the same time the PRC floods the U.S. with “reporters” – it makes life miserable in China for the few foreign reporters still allowed to operate there.

And U.S. and other foreign outlets routinely self-censor to avoid angering Beijing.

You, Too have been Influenced

Many – if not most – people will say they are too smart, too well educated, and too discerning to be influenced by Chinese Communist Party media warfare induced propaganda. Maybe so. But if you’ve ever said or thought any of the following, you’ve been “influenced.”

Professor Gershaneck’s book is indeed alarming, though one grudgingly admires China’s industriousness and persistence on the “non-kinetic” media/public opinion/psychological fronts.

But certainly the U.S. Government has its own media warfare and political warfare effort to match and defeat whatever Beijing is doing?

If only. Unlike previous administrations, the Trump Administration understood the problem, and also understood China’s political warfare efforts. It had some limited success exposing and cracking down here and there – with Secretary of State Mike Pompeo (to whom the book is dedicated) and Deputy National Security Advisor, Matthew Pottinger being particularly effective. But they ran out of time.

The U.S. Government is once again back to doing nothing while China runs wild in the crucial “cognitive” battlefield that Professor Gershaneck explains so well in this important book.

This isn’t surprising, one supposes. The recent collapse of the Afghan government and military was as much a political warfare victory for the Taliban as a military victory.

The U.S. military and civilian leadership didn’t seem to notice.

One hopes they take China’s version of the media and political warfare threat more seriously. And then do something about it.

Reading Professor Gershaneck’s books would be a good start.

To Purchase the Book and learn more: Visit the bookseller at this link.

Grant Newsham is a retired U.S. Marine and a former diplomat and business executive who spent many years in Asia. He is a senior fellow with the Center for Security Policy.