BOOK REVIEW | ‘No Pianos, Pets or Foreigners! My Life in Japan in the ’80s’ by Joe Palermo 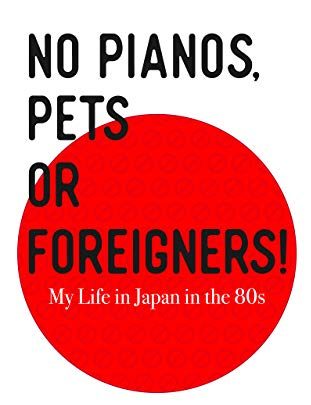 No Pianos, Pets or Foreigners is a short 127-page easy-to-read book that provides the reader with a tapestry of engaging experiences of a foreigner living in Japan in the 1980s. The author brings you through an eight-year journey over a succession of entertaining short stories written in an easily digestible style. The book, though not complete, also provides insights and comparisons of Japan today with its recent past.

The author Joe Palermo, a U.S. national from Chicago, first came to Japan as part of a month-long college student tour of Asia. While in Japan he stayed for one week in a young Japanese family’s home in Nara, wherein he also shared bed and board with the family’s resident mouse!

This first visit was pivotal, for it not only inspired Palermo to return, but it was here that he met his future wife, Taeko. It was quite literally “love at first sight,” as he writes, though they had hardly exchanged a word on that first visit.

Palermo had fallen in love with Japan and immediately began learning Japanese on his return to the United States. He returned again a year later, staying first with a family in Sayama, Saitama, and for a week with Taeko’s family in Osaka.

A Roving Teacher in Gumna

After graduation, Palermo was back in Japan as a participant in the Japanese government’s Monbusho English Fellow program, known as the JET program. Working as a roving teacher for two years based in Numata, Gumna, Palermo taught in 50 middle schools throughout the prefecture.

He describes a series of engaging stories with locals, students, and neighbors. Teachers will no doubt relate to Palermo’s descriptions of his students, ranging from the boisterous, uninhibited types to those who fluctuate from being totally disinterested, to the acutely inquisitive, unabashedly asking personal questions about you or match-making you with another teacher.

Finding the curriculum rather rigid, Palermo employed various tricks and tips in teaching his charges. These included singing, playing guitar, and learning from student color-coded tracksuits how to remember student names. Students as a result were astounded by his “memory ability,” proclaiming, “He remembers me!” He was stumped, though, on one occasion, when in class almost every student had the same last name!

Palermo also visited the orphanage Shikishima Gakuen as part of his work as a teacher. There, he met children abandoned by their parents, mentally-challenged children, and runaways. He was pleasantly surprised to learn that the orphanage was integrating its children into the mainstream school system.

One time he met a young female student, “S-Chan,” who was mentally challenged but also attended one of the other schools he taught in. He quickly noticed her when entering her class at the school. Lining up to greet their teacher, students confidently exchanged welcome greetings with him, till a hush came as he approached “S-Chan,” standing by shyly, waiting her turn. When he reached her, knowing she was slow in speaking, he shook her hand, and gave her a lively English and Japanese greeting as though he and she were long-time friends.

The other students were gobsmacked! She knew him! And she was able to speak with him. Palermo remembers how brightly she beamed with a joyful smile that day. This made her day, as well as his.

This was a class act (no pun intended) by Palermo. He knew that such small acts of kindness could really boost the confidence of shy and challenged students.

One interesting story concerns the time on an overly crowded train when a passenger passed out, fell on his back, and began to vomit. Palermo, coming to his assistance, cleaned him up and found a seat for him. The passenger was very grateful.

Palermo, sure that the passenger was OK, got off the train only to be stopped by a male school student, who had noticed that some vomit had still remained on Palermo’s shoe, and thus was offering a tissue. Palermo was pleasantly stunned by the student’s act of kindness to him.

Like a sage of Socrates, he made a profound observation, saying that people do notice and observe your actions even though you may not think so, and your actions can — and usually do — have a positive impact on people around you.

Shock at the Office

While in Japan, Palermo made great efforts to gain fluency in the Japanese language. He would assiduously take notes of new words and expressions, always seeking to speak the language wherever he could.

This paid off. Leaving his teaching career, after two years, he joined a small traditional Japanese company in Tokyo, Shimaden, becoming responsible for clients in its international trade business. He would also act as translator for the managing director, and often accompanied him on international business trips. Three years later, Palermo moved on to take up a corporate position in the company A.C. Nielsen (now known as Nielsen).

While at these companies, Palermo was to experience an all too common social phenomenon in Japan — that of suicide. He describes situations where there was a suicide in one company, and an attempted suicide in the other company. In the former case, “K-san,” a male employee,  did so just moments after Palermo had seen him in his office.

Not surprisingly, Palermo was greatly shocked. But, the next day, the young widow of “K-san” came to his office with her young children, offering small gifts to all of the staff and apologizing for any inconveniences the suicide of her husband had caused. This perplexed him even more. It was clearly a deeply heart-wrenching episode for the author. To this day, suicide in Japan remains a serious social issue.

Throughout the book, Palermo also expounds on his experiences with weddings and permission to marry, buying a car, visiting the dentist, forgetting your passport, meeting his favorite manga artist, business culture, karaoke, company parties and etiquette, trains, and the joy of Japanese bathing and household gadgets, to name a few.

His time in Japan was not without its frustrations, of course. These included being constantly hailed with daily greetings of “Haro! Haro!” by curious primary students as he walked through his local town — a decidedly embarrassing experience for him, especially if out on a date.

Another annoyance was the constant bell ringing on the speedometer of his kei car when he drove over the slow set speed limit of 70 km/hr, although he had this problem “fixed” by a local mechanic.

As the title of the book suggests, even with his Japanese wife, he encountered great resistance when trying to rent an apartment. On one occasion he was told by the landlord, who, despite listening to his plea in fluent Japanese, still refused to rent out the apartment to him, stating that he was being refused not because he was a foreigner, but because he wasn’t Japanese!

Despite such setbacks, shortly thereafter, he and Taeko finally found an even better place to rent. As is often the case, one door closes and another opens.

The stories make for an entertaining read, getting straight to the point without being heavy or preachy. If there is anything lacking in the book, it would only be that the author must surely have more stories to tell.

Palermo returned to Chicago with his wife and son after his eight years in Japan. There, he continued to work for A.C. Nielsen for the next 25 years in their global headquarters. He later worked six years for Information Resources Incorporated, where he established several global services. Now semi-retired, he lives with his wife in the suburbs of Chicago, from where they enjoy occasional visits back to Japan.

Title: No Pianos, Pets or Foreigners! My Life in Japan in the ’80s

To learn more: To learn more and to purchase the book, click here to reach Amazon’s website.