Q&A COVID-19: The Various Drugs Being Researched in Japan 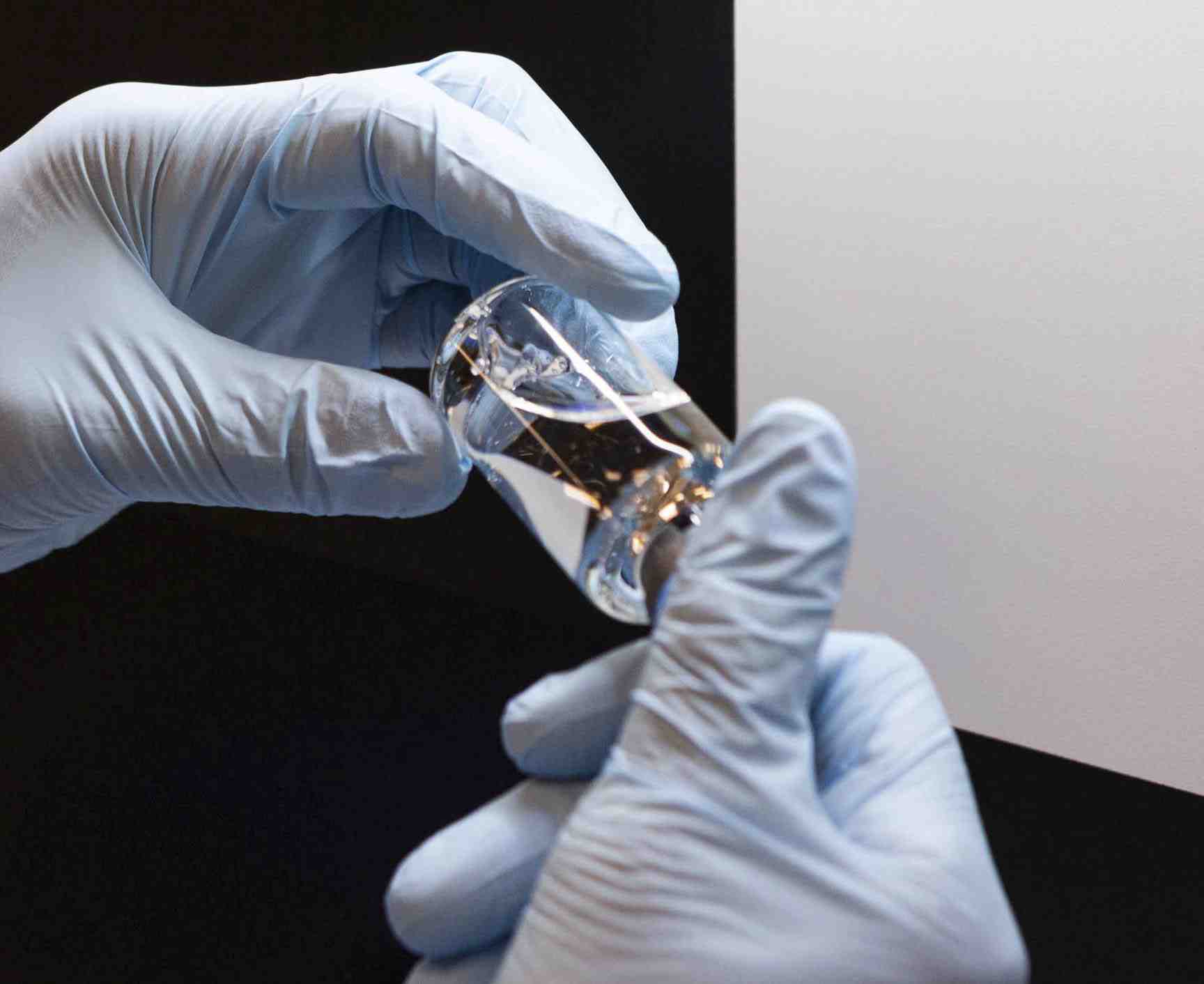 You might have heard the mantra, “We don’t have time to develop something new, let’s use medicines we already have.”

Many academics in Japan and around the world have called for further investigation into drugs currently on the market which could help fight COVID-19. In Japan, some drugs were even approved in May, and plenty of research is currently underway.

Here, we explain the various drugs currently being researched in Japan in the fight against the virus. 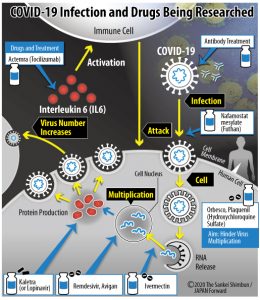 What are some key characteristics of the drugs currently being researched?

Many of the drugs gaining attention in Japan now were developed to tackle a virus with genetic structures similar to the novel coronavirus, namely viruses with RNA genetic material, such as Ebola or earlier strains of the virus.

Many of the researched drugs are trying to tackle the process of virus multiplication by COVID-19 inside the human body.

What drugs act against multiplication of the virus?

When the coronavirus enters human cells, it starts replicating the RNA (ribonucleic acid), which contains its genetic information and allows it to spread further in the body. Drugs aimed at multiplication of the virus try to prevent this mechanism from working.

The drugs currently under this category are: Remdesivir, Avigan, Kaletra (or Lopinavir), Plaquenil (Hydroxychloroquine Sulfate), Ivermectin, and Orbesco. Each one attacks slightly different aspects of the process.

Which drugs are showing promise in the course of treatment in Japan?

Remdesivir, produced by the American company Gilead Sciences, is a drug that had previously failed against Ebola, but has shown promising research results in the case of COVID-10, in Japan and abroad. It was formally approved for treatment against COVID-19 in Japan on May 7 through an unusually quick process, which sought to bypass the normal channels without sacrificing research quality.

Kaletra (or Lopinavir), produced by American company Abbvie, was developed as a treatment for HIV. It is designed to act using the proteins used by the virus to multiply in the body and is currently being researched at Gunma University.

Finally, a drug normally used against bronchial asthma, Obesco, is showing promise and currently undergoing research at Center Hospital, a part of the National Center for Global Health and Medicine.

Are there other drugs that are close to being approved?

Favipiravir, known as Avigan and produced by FUJIFILM Corporation, is an antiviral drug used for influenza in Japan. It has been undergoing trials as a treatment against the novel coronavirus, but was recently pulled from the market after reports of potential side effects.

The drug gained a lot of attention abroad after reports circulated of cases in China showing improvements when the drug was administered in the early stages of the infection. In Japan, the drug has been tried on thousands of patients in clinical trials.

According to research carried out at Fujita Medical University on a sample of 2,158 patients, although a portion of them showed some side effects, a large portion showed improvements after the medication was administered. In particular, there was an improvement in 74% of patients with mild symptoms after one week of administration, and 88% experienced improvement after two weeks of use.

However, research is still underway. One of the issues, for example, is that many patients might be fighting the virus and improving naturally. Approval of the drug was scheduled for May, but has been pushed to June, the Ministry of Health announced on May 26. 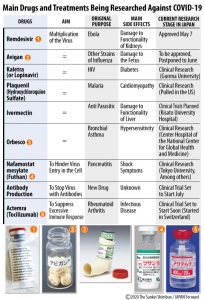 Are there any trials using a combination of drugs?

Given that different drugs attack different stages of the virus as it multiplies, research is underway to combine different treatments.

This is the case with Nafamostat mesylate (commercially known as Futhan), a medication against acute pancreatitis. In this case, the drug is being used to attack the proteins on the surface of the coronavirus, hindering virus multiplication.

Tokyo University has started clinical trials combining Futhan and Avigan to attack two different stages of virus multiplication, hoping for improved results in the preventing the spread of the virus.

Another possible combination is with Ivermectin, the antiparasitic drug developed by Satoshi Omura, recipient of the Nobel Prize in Medicine and Physiology (2015). This medication could attack the virus’ RNA genetic material as it tries to reproduce itself in the human cell. It has obtained promising results in Europe and the United States, and clinical trials are planned by Kisato University Hospital.

What treatments have not been effective so far?

The effectiveness of Plaquenil (Hydroxychloroquine Sulfate), the anti-malaria drug which has been widely publicized in the U.S. and elsewhere, is being questioned.

Although the drug safe against malaria and other diseases, research in several countries has shown that it might worsen the impact of COVID-19 on the body.

The WHO formally halted clinical trials of the medication on May 25, following the decision of several other countries. Earlier in May, medical journal Lancet published reports, saying that tests on a large number of patients had not shown any effectiveness in curing COVID-19.

Are there drugs which affect other mechanisms of the virus?

Overstimulation causes activation of an excessive immune response, which then starts attacking not just the virus but also the body’s home cells, ultimately causing the patient’s condition to worsen.

Some of the drugs being tested in this category are aimed at stopping the exaggerated immune response. Others try to boost the body’s own antibodies to fight against the virus.

What drugs are being tested with this course of action?

Research in this area is currently focusing on two drugs.

The first one is Actemra (Tocilizumab), produced by Chugai Pharmaceuticals. It was originally intended for rheumatoid arthritis, and acts to stop the exaggerated immune response. The company is set to start clinical trials in Japan soon. It has started clinical trials in Switzerland, with results expected to come out in the summer. The hope is that, if the drug is approved abroad, this will lead to a speedy approval in Japan, just like Remdesivir.

A second course of treatment is through boosting the production of antibodies. The process involves taking the plasma of red blood cells and white blood cells from patients who have recovered from COVID-19 and using it to produce antibodies that are tailored to fight this virus by boosting the immune response of patients who receive it.

This is the case with the new treatment being carried out by Takeda Pharmaceuticals Co. With collaborative research from abroad, clinical trials are set to start in July, and, if all goes well, approval is hoped for by the end of 2020.