A new report from a major United States think tank warns that China has achieved clear naval superiority in many categories of combat capability over Japan’s Maritime Self-Defense Force (JMSDF). It goes on to warn of a crisis of stability in the East China Sea and around the Japanese territory of the Senkaku Islands, and a threat to the Japan-U.S. alliance.

The report details how China is using this superiority to intensify its campaign of pressure against Japan’s national security in the area, including the possible use of force. The report concludes that Beijing has gone so far as to develop detailed scenarios for Chinese occupation of the Senkakus.

The report, titled “Dragon Against the Sun: Chinese Views of Japanese Seapower,” was published in mid-May by the nonpartisan Center for Strategic and Budgetary Assessments. Authored by Dr. Toshi Yoshihara, a leading expert on Chinese maritime strategy, the report is based on a detailed analysis of Chinese-language open source assessments by military analysts in China of Japan’s defense capabilities vis-à-vis China.

Among other things, the report concludes that, over the past five years, China has drastically strengthened its naval power and thus established a significant superiority over Japan. This subject of Japan-China naval balance of power has hardly been studied elsewhere. 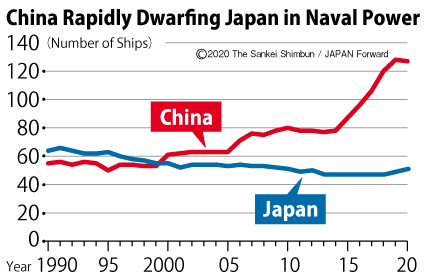 Comparison of Japan’s Naval Power against China over 30 years

Massive Buildup in the Last Decade

According to the report, China’s effort to strengthen its naval power on a large scale through the expansion of its People’s Liberation Army-Navy (PLAN) began around 2010 and accelerated under the leadership of the Xi Jinping government, especially for the most recent five years. The result has been a massive buildup in fleet size, aggregate tonnage, and fire power.

In particular, the PLAN has built up vertical launch systems (VLS), which are embedded in the hulls of naval vessels to hold and launch missiles, which are much less vulnerable to attack than conventional missile units. This has given China an overwhelming edge over Japan in this key category.

In the past, the JMSDF was viewed as the premier naval power among Asian countries for its advanced combat capabilities and deterrence strength. However, China has clearly caught up and surpassed Japan, leading to a fundamental reversal in the balance of power that has prevailed in the Indo-Pacific region since the end of World War II.

Dr. Yoshihara based his research and analysis almost exclusively on Chinese sources and elaborates on how China views its own naval superiority vis-a-vis Japan. His research reveals key changes in Beijing’s strategy toward Japan.

The following are three of the basic conclusions contained in the report:

The report says that, against this background of growing naval might and hardening military strategy towards Japan, Beijing has articulated mid- and long-term objectives, including seizure of the Senkakus and hegemony over the East China Sea. One basic change in China’s policy is the long-term goal of disruption of the Japan-U.S. integrated defense arrangement, followed by the eventual expulsion of U.S. military forces from East Asia.

If China continues to advance along this course, the situation would become extremely dangerous for Japan and the United States, posing a serious threat to the very foundation of the long-standing alliance.

The report therefore makes detailed policy proposals for the strengthening of Japan’s own naval defense capabilities and collaboration with the United States for the purpose of deterring China.

Yoshihisa Komori is Associate Correspondent for The Sankei Shimbun, based in Washington D.C.