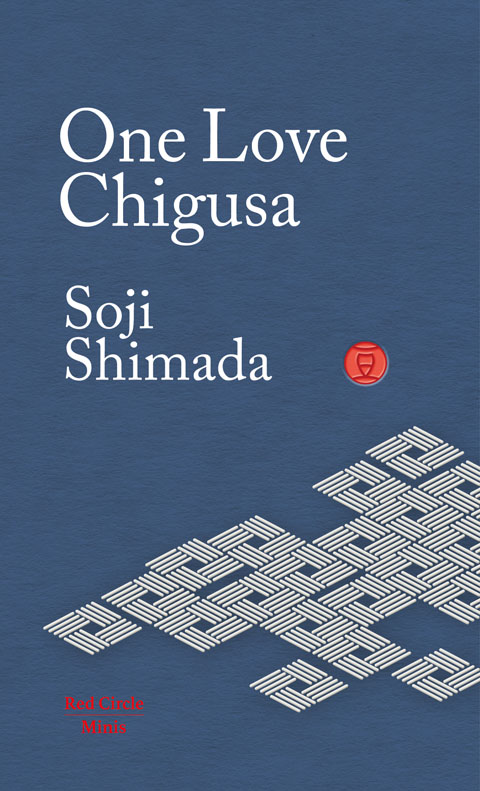 The best science fiction is never about the future, but the present. One Love Chigusa, the latest offering from British publisher Red Circle, is a case in point. Nominally set in the year 2091, Soji Shimada’s short novel deals with highly contemporary concerns, specifically what it means to be human in a world of advanced robotics and AI (Artificial Intelligence.)

The advent of artificial human-like beings has been a rich theme for speculative fiction ever since Mary Shelley’s Frankenstein (1818, republished by various publishing houses). Now that we’ve been informed that “the singularity”ーrunaway growth in machine intelligence to levels far beyond human capabilitiesーis just around the corner, it no longer provokes horror. Rather, the most common response appears to be uneasy resignation and concern about what we humans may learn about our own limitations.

Perhaps that is why Shimada’s Beijing of 2091 is, for better or worse, not much different from Beijing in 2020. People still use email, drink coffee in coffee bars and work in factories. There are even magazines who employ illustrators like our hero, Xie.

There is, however, one technological leap that we learn about straightaway. Xie is badly injured in a motorbike crash and undergoes radical surgery, including an AI implant in part of his brain. The effect is to change his perception of reality.

“There was an unpleasant metallic noise, a ringing coming from somewhere. He saw everything in a flash. The cliff behind him was in fact made of grey metal. Xie’s latent memory had allowed him to see this as real nature.  But the truth was much different. Metal the dull color of lead, iron reddened with rust, all piled together…”

Worse than the physical environment are its inhabitants. Women with demonic red-black faces and mechanical bodies that display monetary amounts constantly scrolling up and down. Men with transparent skin exposing their skulls and mouths stretching from ear to ear.

Xie is an unreliable narrator, misogynist, misanthropic and brain-damaged to the extent of experiencing auditory and visual hallucinations. Or perhaps they are not hallucinations, but true pictures of what the world is really likeーand what everyone else perceives is simply a comfortable collective illusion.

Tellingly, the book’s epigraph describes it as “a homage to Osamu Tezuka.” Tezuka, the creator of Astro Boy, Simba the Lion and Blackjack, is known in Japan as ”the God of Manga.”  His influence here is indirect, but powerful.

Tezuka is sometimes associated with a naïve faith in technology, but much of his later work is dark and nihilistic. As manga authority Frederik L. Schodt explains in The Astro Boy Essays (English version Stone Bridge Press, 2007), even Mighty Atom, Tezuka’s early hit series, dealt with difficult topics such as racial discrimination and war. When the ground-breaking anime version was exported to the U.S. as Astro Boy, it had to be toned down.

American TV company NBC cut scenes of violence, anything close to nudity and references to drugs, religion and nuclear war. Characters that had been killed were presented as having been knocked unconscious. Material that Japanese kids absorbed without problem was considered too strong for American children.

In the words of the Japanese theme song, Astro Boy himself is “a pure-hearted child of science.” It’s always the humans that are the problem. In Schodt’s estimation, Astro Boy would pass the Turing test, –  a way  of distinguishing machine intelligence from human intelligence, devised by British scientist Alan Turing. Even so, he is not fully human because he cannot feel love or fear.

Shimada’s story is an exploration of that problem. The pure heart of an android is a vacuum. It behaves “ethically” because it has been programmed that way. If we converge with non-human intelligence, will we become more ethical, less fearful and less loving?  If androids converge with us, will they become less ethical, more fearful and loving? What elements of human nature are worth saving anyway?

If you want some answers, follow the story of Xie to the end.

Soji Shimada is Japan’s most celebrated writer of “honkaku” (authentic) mysteries, those that focus on the ‘whodunnit’ element rather than social problems or character development. His Detective Mitarai series, which began with The Tokyo Zodiac Murders (1981, available in English translation), has sold more than five million books in Japan, and he has an enthusiastic following in China, Thailand and elsewhere in Asia. He has even established a Soji Shimada Prize for “honkaku” mystery novels written in Chinese.

For many years, Shimada split his time between Los Angeles and Kichijoji, on the west side of Tokyo. That may have encouraged his decision to site his android story in a generically modern Beijing rather than an identifiable future Tokyo. Tezuka did something similar with Astro Boy, “de-Japanizing” the locale in which the android boy conducts his adventures. Here too the landscape in which mankind confronts its own potential replacement is anywhere and nowhere.

As is customary with Red Circle books, One Love Chigusa is an original work that has not previously appeared in print in any language. In something of a coup for the publishers, they have secured the services of Sir David Warren, former British ambassador to Japan, who provides the smooth translation.

For once, Soji Shimada comes up with a puzzle which has no solution, but leaves the reader with plenty to think about.  His story is a welcome addition to the Red Circle roster.

Purchase the Book: From the publisher (in British Pounds) here. Also available from other booksellers. Check Goodreads, here, for your best options.

Learn More: Learn more about the book from the publisher, here, and from Goodreads, here.