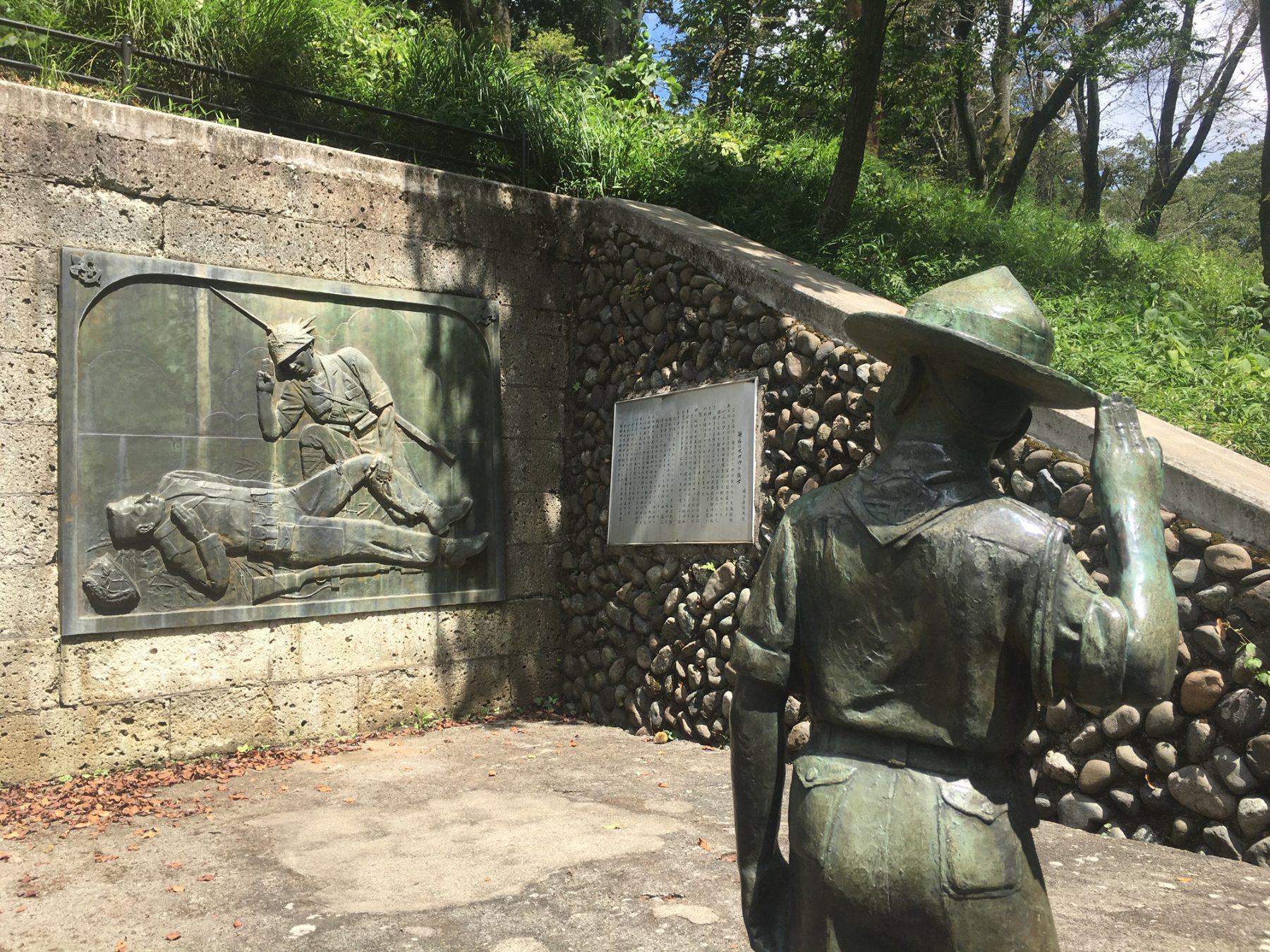 More than 75 years ago, on one of the islands Japanese and U.S. forces battled over during World War II, a Japanese soldier came upon a wounded American.

The latter had been in and out of consciousness, but when he came to, he saw the Japanese soldier over him and a bayonet at the end of a long rifle aimed at his neck. Rather than panic, he calmly acknowledged his fate and passed out again.

As he did so, perhaps without realizing it, he made the three-finger Boy Scout salute. This caught the Japanese soldier off-guard because he had also been a Boy Scout in his youth. 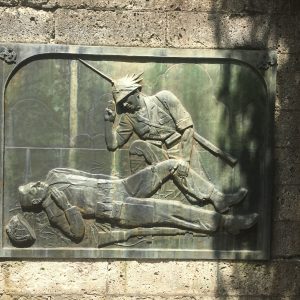 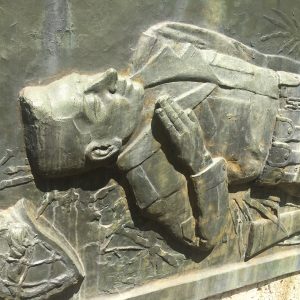 Remembering this, the unidentified soldier decided not to kill him. Instead, he scribbled a note and left it for the American to that effect, telling him he bandaged his wound and wishing him well.

Later, when the American awoke, he noticed no one was around. He discovered the note and put it in his pocket.

Shortly afterwards, he was found by U.S. troops and taken to get medical attention. While recovering, he recalled the note and asked the medical personnel to show him the piece of paper he had had on him. When he read it, he finally understood why his life was spared.

Upon being repatriated to Salt Lake City, Utah, the soldier told his father what had happened. The grateful father in turn let the Boy Scouts of America, founded thirty-some years ago in 1910, know about it.

Years later, in mid-April 1952, the annual meeting of the BSA’s 7th Regional District was held in Salt Lake City, where a representative of the BSA relayed the story to the assembled Scouts and leaders. His remarks were introduced in the BSA magazines, Scouting, the official publication aimed at adult leaders, and Boys’ Life, the official youth publication, as well as taken up by local newspapers.

Later that spring, a Dr. C. M. Finnell, a deputy regional executive within the BSA, was sent to post-peace treaty Japan to assist with reorganizing the Scout movement there. Dr. Finnell arrived on May 29, 1952, and stayed for almost 4 months. During that time, he toured 23 of the country’s 47 prefectures, and had more than 100 meetings learning about the Scout Association of Japan, or Boi Sukauto Nihon Renmei, which had been formed in 1922, a dozen years after its American counterpart. (The current English name has been used since 2001. Prior to that it was the “Boy Scouts of Japan” and after 1971 the “Boy Scouts of Nippon.”) 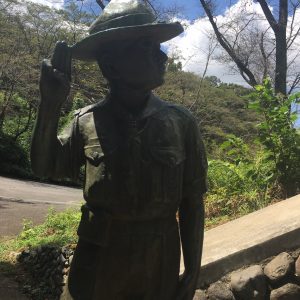 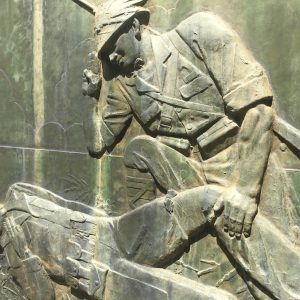 Upon arriving in Japan, Dr. Finnell told the story of the “brotherly love” shown by the Japanese soldier. This story immediately became national news in Japan, and a search was made for that Japanese soldier. Unfortunately, it is believed that he died later in the war.

Subsequently, Kurushima Hidesaburō, a former soldier who had been instrumental in involving Japan in the worldwide Boy Scout movement in the 1910s, became the chairman of the Boy Scouts of Japan in 1954 and began a fundraising drive to build a memorial in honor of the story of the two Boy Scout soldiers. A 10-yen movement was started, and eventually the funds were raised to make a bas-relief featuring the interaction of the two men, an accompanying text plate, and a statue of a saluting Boy Scout.

The memorial was built at a cost of ￥200,000 JPY (at the time) gathered through donations within the Kodomo no Kuni Park in Yokohama City.

The park itself, which means “Children’s Country,” was opened on Children’s Day (May 5) in 1965, using funds contributed by the Japanese public in honor of the royal marriage in 1959 of Prince Akihito, who later reigned as Emperor from 1989 to 2019, and Princess Michiko.

Interestingly, the 240-acre grounds were at the time under the control of the U.S. military in Japan, and the U.S. side was reluctant to turn the land over. In March 1961, Kurushima called on Lieutenant General Robert W. Burns, commander of the U.S. Fifth Air Force, to ask for his cooperation. Burns explained that the issue was being discussed in the U.S.-Japan Joint Committee Facilities Subcommittee.

During the discussions, the two men learned they were both Scouts, and had actually attended the same Scout Jamboree held in California before. Kurushima successfully used this connection to further ask Burns to use his good offices. The two men saluted each other with the Boy Scout salute and bid each other farewell. Burns returned to the United States that summer. Unfortunately, he did not live to see the park opened, dying in September 1964.

On May 5, 1966, one year to the day after the park opened, some 2,500 Japanese and American Scouts gathered at the site of the memorial for its unveiling. Now heavily forested, it is hard to imagine that many people gathered there. But at the time, it was far more open and must have been an impressive site. 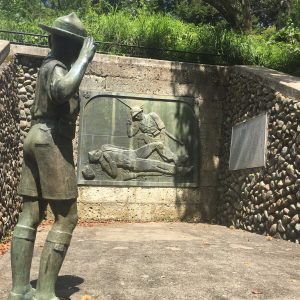 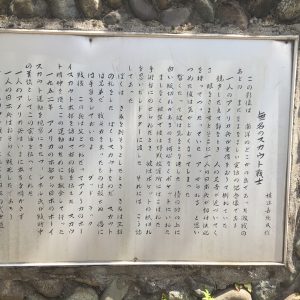 After going up several steps, the visitor will first pass a statue of a young boy in uniform presenting a three-finger Scout salute before the memorial. Directly ahead is a beautiful bas-relief (1.7 meters tall and 2.2 meters wide) designed by the famous sculptor Yokoe Yoshizumi and cast by Yamauchi Shunzō in the late 1950s. To its right is a plaque with text in Japanese only (which is unfortunate for non-Japanese readers who may visit there or otherwise be curious).

The text, which briefly summarizes in under 30 lines the episode on the battlefield and afterwards, reads:

This is a story from a south Pacific island during World War II. A wounded American soldier had fallen. A Japanese soldier with a bayonet happened by. When the American saw him, he thought he would be killed and passed out. He woke up later. The Japanese soldier was nowhere to be seen. He saw a piece of paper and put it away in his pocket. He was taken to a field hospital where his life was saved. The note he had picked up had this written on it. “As I was about to stab you, you saluted me with three fingers. I also was a Boy Scout. Boy Scouts are brothers. You are my brother. It is forbidden to kill anyway who no longer can fight. I applied a bandage to your wound. Good luck.” After the war, the U.S. soldier visited the Boy Scout Association and told them the story. When officials from the BSA visited Japan in 1952, they informed their hosts of the story. The American soldier did not give his name. The Japanese soldier appears to have died in the war. This is a memorial to what happened between these two anonymous Scout soldiers. The actions of this Japanese soldier are the crystallization of Japanese Bushido and the Scout spirit.

I had wanted to visit the memorial since first learning about it in August last year. Although I make frequent trips to Tokyo from my home in Hyogo Prefecture, I was afraid that getting to and from the park, as well as visiting it, would take many hours as I was told it was in an inconvenient location. As a result, after a couple of false starts previously, I finally felt I had enough time to visit it recently and set out early on a Sunday morning.

In fact, the location was not as inconvenient as I was led to believe. One can access it by changing trains at the Nagatsuta Station on the JR Yokohama Line, and walking a short distance from the Kodomo no Kuni station. Upon arriving at the entrance to the park, I asked the information desk to point me in the right direction to the memorial. It was somewhat hard to find inside the park, being in a remote location. But it was very much worth going to see it, helping to restore my faith in humanity and in the personal side of the U.S.-Japan relationship.

What was especially meaningful that blistering hot morning was until I went up the path to the memorial (which is not clearly marked), there seemed to have been no other visitors to it that day. After I went up there, young families appeared curious as to the American in front of a memorial of sorts and started to go and spend time looking at the relief, reading the plaque, and reflecting on the story and lessons.

Hopefully, they told their children about that great and humane Japanese Scout on an island battlefield who lovingly allowed his American brother to survive.

ANOTHER STORY of HOPE: They Bombed Japanese Cities, Yet B-29 Crew Members Are Remembered in Memorials Across Japan