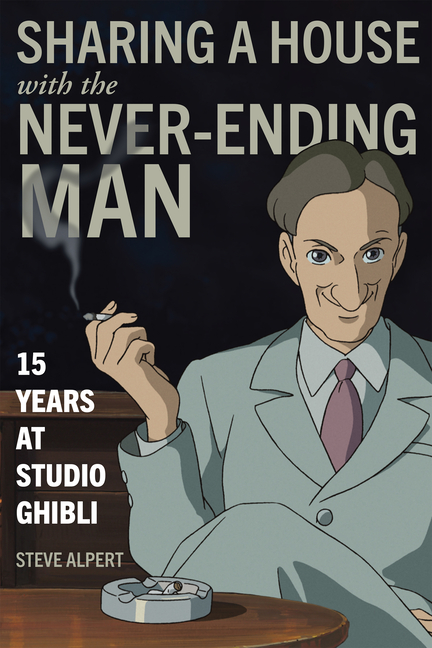 “Miyazaki and I… were first shown clips from Fantasia 2000, which was then in production. Asked what he thought of the film so far, Miyazaki replied simply ‘hidoi … totemo hidoi” (terrible … really terrible), which I translated as “interesting … Mr. Miyazaki finds the animation very unusual and very interesting.’”

You can see why Steve Alpert was indispensable to Studio Ghibli’s global ambitions. He really knows what should get lost in translation and what should stay. “Sharing a House With the Never-Ending Man”, his highly entertaining memoir of his fifteen years at Ghibli, gives an insider’s view of how cultural products are translated and transformed, also how art and commerce collide in the world of cinema.

Alpert was the right man in the right place at the right time. Ghibli recruited him from Disney’s Japan arm in 1996 as a board director and senior executive tasked with bringing the creations of anime maestro Hayao Miyazaki to international audiences. A business school graduate experienced in the ways of the American entertainment industry, he was also a Japanese speaker who had studied Japanese literature at the graduate level and had ambitions of becoming a literary translator.

If the combination of skills was perfect, so was the timing.  Miyazaki was about to launch two masterpieces, Princess Mononoke (1997) and Spirited Away (2001), that would prove beyond doubt that anime could be serious art while doing serious business at the box-office. In the process, he would himself be transformed from a purely domestic Japanese phenomenon to a globally recognized auteur.

Events moved fast. In 2003 Alpert would find himself at the 2003 Oscars, where Spirited Away won the award for Best Animated Feature. At the Berlin Film Festival, he was alone on stage to receive the “kinkuma-chan” (Golden Bear Award), the elusive Miyazaki having declined to appear in person.

Alpert also received the ultimate accolade when he was on the receiving end of an expletive-laced rant by Harvey Weinstein, ending with the threat “OR YOU’LL NEVER WORK IN THIS F***ING INDUSTRY AGAIN.” Alpert, of course, was a Ghibli executive who lived and worked in Tokyo.

Disney had bought the rights to distribute Ghibli films overseas, but the marketing department had objections to the contents. As Alpert summarizes, “My Neighbor Totoro—the dad gets naked and bathes with his daughters! We can’t show that in the U.S. Pom Poko—the raccoons use their scrotums to do magic. We can’t have children looking at animal scrotums. Nausicaä of the Valley of the Wind—when she’s flying we can see her ass…”

The solution was to turn the films over to the Weinstein Brothers’ Miramax, which Disney owned at the time. Alpert had no inkling of the “Me Too” troubles that later put paid to Weinstein and Miramax, but he does hint that the company’s reputation for sensitivity to artistic values may not have been entirely deserved. At a meeting to discuss Princess Mononoke, he was bombarded with questions by Miramax personnel.

To be fair, Alpert does praise the contributions of English language script-writer Neil Gaiman and the Hollywood talentーsuch as Minnie Driver, Billy Crudup and Gillian Andersonーwho had the difficult job of giving voice to the characters. Even the film’s Japanese distributors had been uncomfortable with certain aspectsーsuch as limbs being sliced off and characters who were lepers and prostitutes. Miyazaki smiled, thanked them for their feedback and ignored it.

In Alpert’s telling, Miyazaki is an enigmatic figure, generous and self-effacing, but with a will of steel. When a film is completed, Miyazaki is wont to suggest that the team of animators should be fired, to give them a sense of what is at stake, and then rehired for the next production. Nobody is sure whether he is joking.

One revealing anecdote concerns Miyazaki being offered vintage port at a posh New York restaurant. Though he rarely eats out and doesn’t drink much, he sent the port back on the grounds that it was not forty years old as claimed. The waiter protested that it was. Miyazaki was adamant. The bottle was checked, and it turned out he was right. Miyazaki brings the same kind of accuracy to his anime work. As with Akira Kurosawa, every detail has to be right, including those that the viewers would never consciously notice.

Miyazaki was dubbed “the never-ending man” by his colleagues because of his indefatigable creative energy. But artistic accomplishment is not enough for an independent film company to enjoy four decades of extraordinary box office success. Alpert’s memoir is also a business story as it portrays two powerful characters who provided the commercial infrastructure which enabled Miyazaki’s talents to thrive.

Toshio Suzuki, producer and marketing strategist, subverts every stereotype about the risk-averse, consensus-seeking Japanese salaryman. An instinctive contrarian who pays no heed to conventional wisdom, he is in Alpert’s view “one of the most brilliant people to ever market anything.”

Then there is company president Yasuyoshi Tokuma, the old school entrepreneur whose gut instinct led him to back Ghibli and Miyazawa in the mid-1980s. A blustering teller of tall tales who is also a font of wisdom, the late Tokuma is described as “your grandfather on steroids.” He deserves a book in his own right, but short of that we have his recipe for personal and career success.

“Don’t let anyone write the screenplay of your life. Make your ambitions high. Real men don’t apologize. And always remember, if you need money, the banks have plenty of it.”

Commerce and art are like ying and yang. You need them both to make great movies.

Title: Sharing a House with the Never-Ending Man: 15 Years at Studio Ghibli

For more information: Find additional information and links to muiltiple options to purchase the book at the publisher’s website, here, and at Goodreads, here.