BOOK REVIEW | ‘The World of Itō Jakuchū: Classical Japanese Painter of All Things Great and Small in Nature’ by Yasuhiro Sato 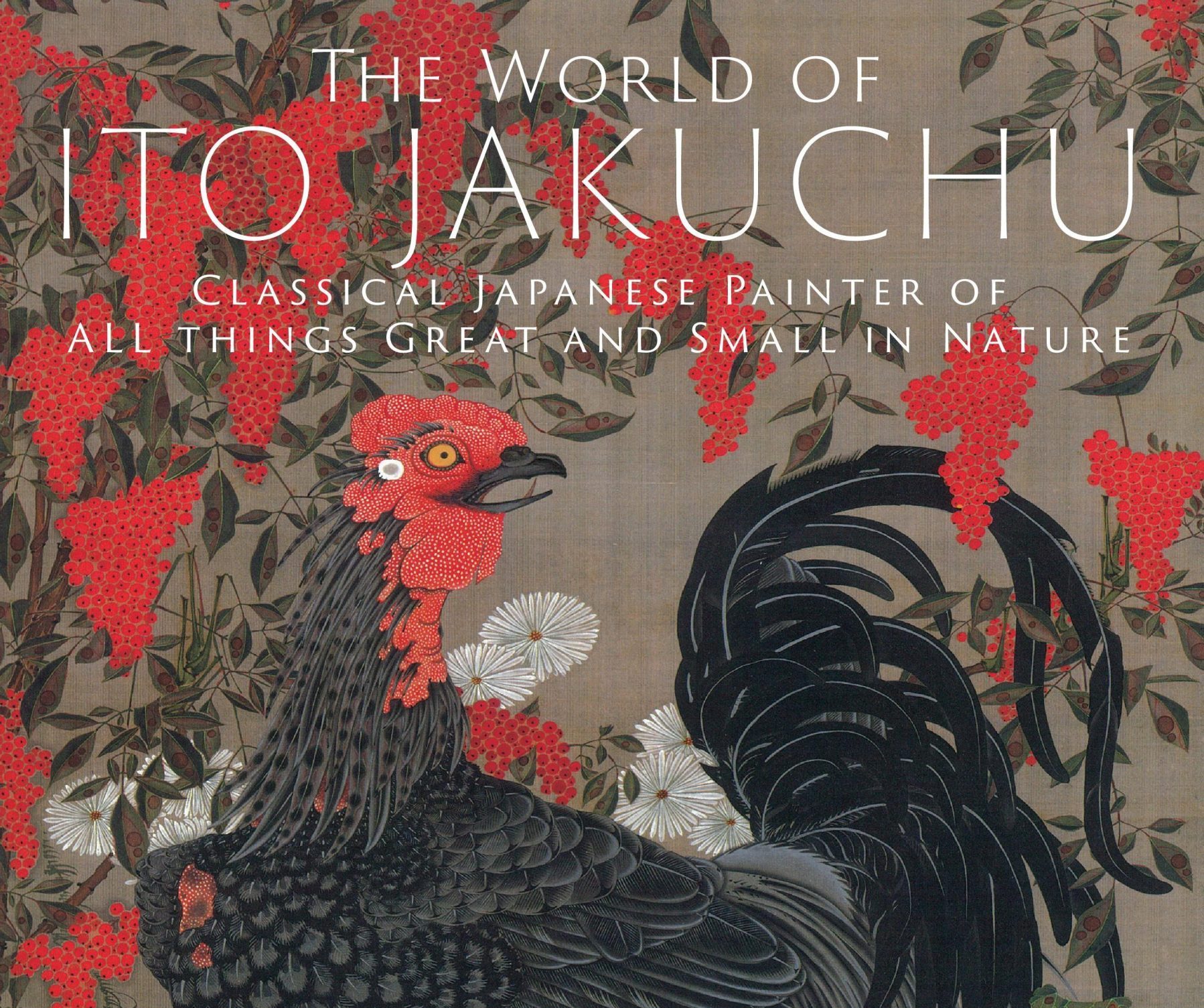 When you hear the words “Japanese art,” what comes to mind?

For some, it might be the sumptuous golds, haughty whites, and austere greens of Kanō Eitoku’s painted screens. For others, ukiyo-e, from the quirky comedy of Hokusai sketches to the elegant vignettes of ladies at their toilet a la Utamaro. The more modern-minded might think of Tsuguharu Foujita, Yayoi Kusama, Hiroshi Hamaya, or Yokoyama Taikan. Many will surely answer, “Manga!” or “Anime!”

How many of you said, “Itō Jakuchu”?

Probably not many. Not nearly enough. Art historian Yasuhiro Sato wants to change that. He has made it his mission to bring to the world the splendors of Itō Jakuchu’s art.

In this fine volume, nicely translated into English from the 2006 original, Sato takes a big next step in his life’s work. Thanks to this book, people from around the world now have access to an introduction to one of the greatest, and most unknown, artists in the history of Japan.

Perhaps Itō Jakuchu is relatively obscure because, unlike many more famous artists, he lived a life of, well, relative obscurity.

The scion of a greengrocer family in Kyoto, Jakuchū spent the first half of his life running the family business and doing his art on the side. The details of how a Kyoto greengrocer earned a living during the Edo Period make for one of the more delightful parts of Sato’s book.

But things were not so delightful for Jakuchū. Corrupt rival businessmen and venal local politicians conspired to run him out of his birthright and take over the land where he had his store. Jakuchū fought back and was able to thwart the wicked designs of his tormentors. He saved his family business from ruin.

Eventually Jakuchū decided to devote himself to his Jōdo Buddhist faith, entering the Manpukuji temple later in life. Even earlier, though, he had lived there as  a lay monk, doing meditation and his art without taking any vows. His art was an expression of his faith, a way to explore the true nature of the world around him. It was this apartness from the world while also living in it—the Buddhist fabric of his earthly existence—that made Jakuchū the artistic genius that we moderns are rediscovering today.

“The nature that Jakuchū strove to depict was not that of individual phenomena,” Sato writes, “but the essential life force of nature itself.” Jakuchū’s goal, as he put it, was to go beyond the painters who sold art due to mere “technical excellence”. Jakuchū was at heart a Buddhist seeker. And what he saw in the world was extraordinary.

Flipping through the pages of Sato’s book, one’s breath is taken away time and again. I lingered long over dazzling portraits of cranes, comical ducks, strutting roosters, and self-important fish. His compositions are almost always perfect, his color scheme bold and alive.

Not only that, but Jakuchū’s work is exquisite down to the smallest detail. A close-up of Hyakken-zu (ca. 1772-1787), for example, shows that the “hundred dogs” of the title are painted down to the single strand of fur. A picture of seashore dwellers (Baikō-zu (Shells), ca. 1761-1765) depicts clams, starfish, crab, abalone, conchs, and a dozen other varieties of tidepool creatures in almost photographic detail. The butterflies, grasshoppers, and dragonflies in Chihen gunchū-zu (Pond and Insects, ca. 1761-1765) seem just about to fly off the page.

However, Jakuchū had to work hard to achieve this kind of effortlessness. He had to confront himself and his world before he could mature as the artist he was born to become.

Jakuchū began his artistic training as a teenager, it is believed, by studying under a painter proficient in the Kanō school. But Jakuchū—a Buddhist name given to him by his mentor, the great Zen priest Daiten (1719-1801)—soon outgrew Kanō formalism and began to explore the more metaphysically rich “bird-and-flower” and landscape art of the Song and Yuan dynasties of China.

Finally, true to his Zen training, Jakuchū eschewed the dead hand of the past masters and went right to the living present. “Domestic chickens,” Jakuchū wrote, on Daiten’s retelling, “with their beautiful plumage, are commonly raised in villages and hamlets. That is where I will start.”

This decision to look at the world and paint the essential truth of what he saw set the course of Jakuchū’s life thereafter. His dedication to his vocation culminated in his masterpiece, Colorful Realm of Living Beings (Dōshoku sai-e), thirty scrolls of various animals, plants, insects, and fish, which took some ten years to complete once Jakuchū got started in 1758.

Now owned by the Imperial Household of Japan (which acquired the set during an anti-Buddhist phase of Meiji Period history), Colorful Realm of Living Beings originally hung in the abbot’s quarters of Shōkokuji temple in Kyoto. The centerpiece of this collection is a Shakyamuni triptych, exceeding even the Chinese masters in execution and signaling the deep Buddhist faith which informed all of Jakuchū’s artistic endeavors. This is the high point of Jakuchū’s career and the centerpiece of Sato’s book. And it is simply marvelous to behold.

Veritable bursts of color, married flawlessly to animating and yet organizing form, are the hallmarks of this series. Rarely using sketching lines, Jakuchū applies color directly to his scrolls, using also back-coloring to great effect. His works fairly breathe with life and meaning, and one could easily spend an hour gazing at each of the thirty pieces which make up this collection. Rarely does one find such balance of movement and stillness, such creamy undulation of background buoying such crisp expressions of red, blue, green, and brown, in a single work.

Jakuchū did it thirty times in a row. I think he could easily have done it three hundred times. He must have exhausted himself on a daily basis disciplining such creative energy and applying it to the controlled, precision brushwork which is his signature form. Colorful Realm of Living Beings is truly a treasure of world artistic heritage.

If Sato’s book contained only the closeups of Colorful Realm of Living Beings (which it does) it would be worth purchasing. The exquisite detail and frozen-in-mid-act poses of the works make Colorful Realm of Living Beings greater, in my view, than the drawings and paintings of John James Audubon or even Albrecht Dürer. Jakuchū is simply a master, and it is a joy to see the beautiful things he left behind in such abundance.

But there is much more to Sato’s book than these riches. Sato emphatically disagrees with the “stereotyped” consensus that all there really is to Edo culture, as an editor once told him, is “the Genroku (1688-1704) and Kasei (1804-1830) eras”. Instead, he presents the atmosphere of Jakuchū’s era through information about the artist, his life, the age in which he lived, and Japanese art history in general. The book follows Jakuchū through to his final days as a temple-dwelling recluse, when he painted quietly powerful pictures of haunting grace and sold them for “one sack of rice each”.

This, I think, is the key to Jakuchū’s long life of artistic output. He wanted to be a good Buddhist even more than he wanted to be a great painter. Jakuchū’s faith outstripped the trappings of artistic creation to which so many other artists have fallen prey. Here was a man who knew painting and had no desire to do anything but become a better painter for the sake of his beliefs.

“On a daily basis I devote myself heart and soul to painting,” Jakuchū wrote, “drawing superlative flowers and trees and attempting to capture the true forms of birds and insects. … My aim is not to win fame or glory in the mundane world but to contribute to the sacred accoutrements that adorn the temple.”

The Artist and his Art Revealed

Itō Jakuchū may be obscure, but it is hoped that Yasuhiro Sato’s book will finally change all that for the better. This is an artist who is just too good not to know.

The World of Itō Jakuchū is a wonderful exploration of an artist and his art, shown as a diptych in their own right, and one of the best art books I have encountered in quite some time. Readers are encouraged to do themselves a favor and buy this book so they, too, can enter the world of Itō Jakuchū.

Title: The World of Ito Jakuchu: Classical Japanese Painter of All Things Great and Small in Nature

Purchase the Book: Available in print format. Purchase through Amazon, Kinokunya and honto, and access to all three sellers found  here.

Learn More: Learn about this book, which has been made available to English language readers by the Japan Library, here.