[Bookmark] Bodhisena: The Indian Monk Who Opened Eyes in Nara 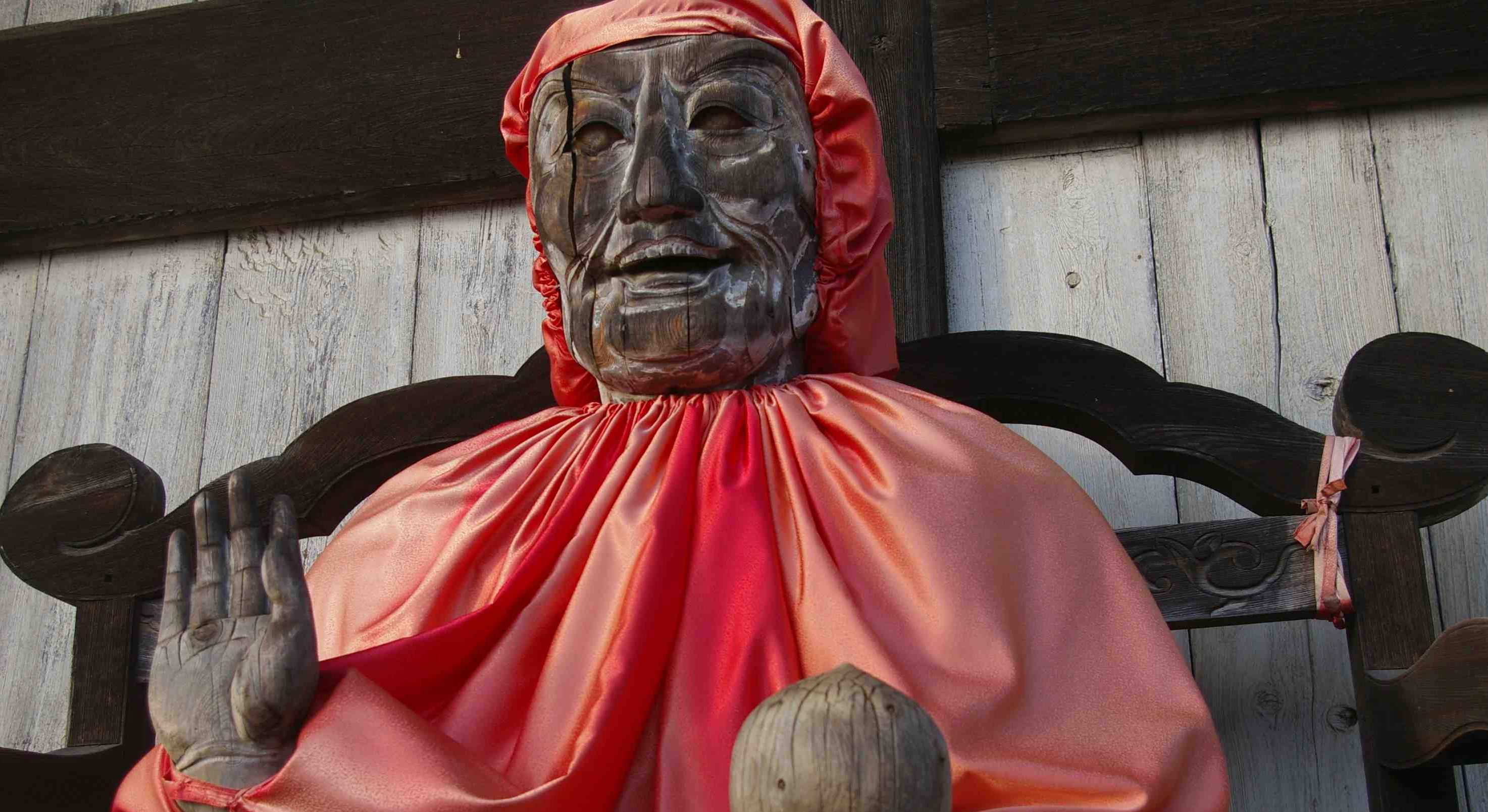 In its long history, Japan has undergone three major periods of internationalization.

The last of these, the modern era beginning with the Meiji Restoration and lasting till today, is self-evident.

Also fairly well-known is the Namban period from the arrival Portuguese traders in 1543 until the bloody suppression of Christianity by the Tokugawa Shogunate and the government’s issuance of the seclusion edicts in 1614, which ushered in over 250 years of relative isolation.

Least known of the three is the period which began from roughly the early-sixth century, during which Japan borrowed extensively from Tang China and the kingdoms on the Korean Peninsula. Japan embraced political institutions — in the form of the ritsuryo system of centralized government administration — and culture from the Asian mainland on a wholesale basis, with Buddhism being undoubtedly the most important of these imports. 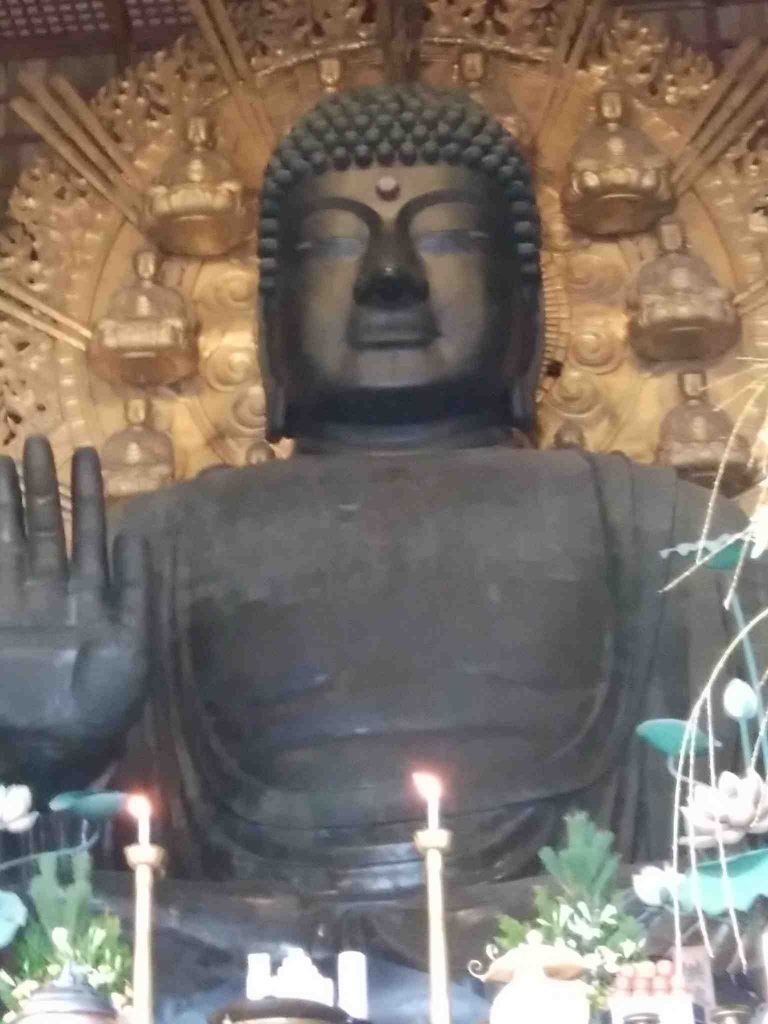 The Great Buddha at Nara

Chinese and Korean monks who came to Japan brought with them copies of important sutras, as well as copies of frescoes from the walls of Indian temples and monasteries.

Japanese recreations of these can be seen at the Horyuji temple in Nara — the cradle of Japanese Buddhism — in wall paintings that suggest Persian as well as Indian influences.

Despite the difficulties and dangers of ocean travel, quite a few official Japanese emissaries, as well as monks and traders, also made the hazardous journey to the Asian mainland during this period, which came to an end in the late ninth century, as Japan ceased to send official ambassadors to China as the Tang regime collapsed in anarchy. 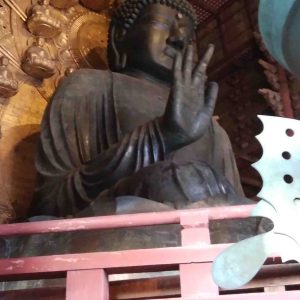 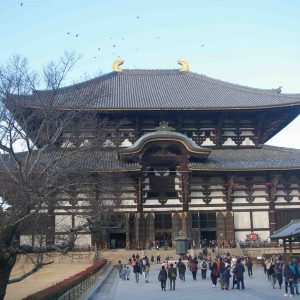 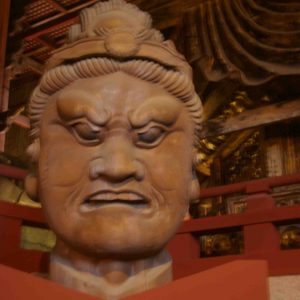 Head of a temple guard in Nara.

Opening Buddha’s Eyes Before a Crowd

The earliest forms of Buddhism introduced to Japan were rather esoteric, and the ruling class saw it primarily as a vehicle for supporting the state. It was in that spirit that Emperor Shomu in 741 ordered the creation of a giant statue (daibutsu) of the Locana (Vairocana) Buddha ー the primordial Buddha of the universe ー at the Todaiji temple in Nara.

It was an incredibly costly undertaking that wreaked havoc on state finances. According to Kegon Buddhism, the Emperor and state were the physical manifestation of the Locana Buddha’s universal, interrelated order. This too was in emulation of the Tang, which had already built a giant Locana Buddha at Luoyang.

The “eye-opening ceremony” (kaigen or kaigan) for this Daibutsu held in 752 was a truly international affair, attended by Empress Koken, retired Emperor Shomu, Empress Dowager Komyo, and 10,000 guests, including monks from China and the Korean kingdoms of Paekche, Kudara, and Silla. Meanwhile, 4,000 dancers also took part.

In Buddhism, the “painting in” of the eyes of a statue signifies its “awakening.” In effect, it is a consecration that endows the statue with spiritual properties so that the image is believed to become akin to a living Buddha.

Chosen to officiate at the ceremony and to paint in the pupils of the Daibutsu’s eyes as the kaigenshi was the Indian monk Bodhisena, the first Indian to reach Japan’s shores for whom we have documentary evidence. To this day the brush Bodhisena wielded, as well as some of the Tempyo-era costumes, masks, and other utensils used during the ceremony are preserved in the Shosoin treasure house near Todaiji. 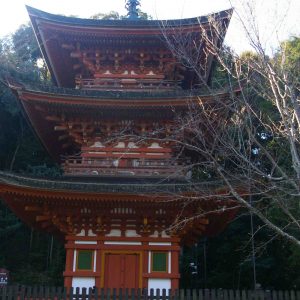 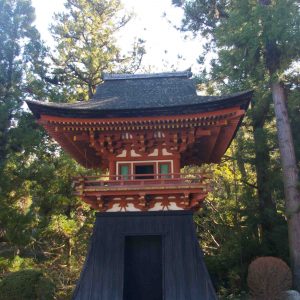 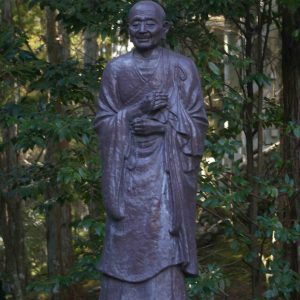 I was astonished the first time I read that the eye-opening rite had been performed by an Indian. Having read about the ordeals that the Tang-era Chinese Buddhist pilgrims Xuanzang, Faxian, and Yijing had undergone to reach India, I could not imagine how an Indian could have made it to ancient Japan. So I decided to do a little investigating.

How on earth did Bodhisena come to Japan?

The documentary evidence concerning Bodhisena is fragmentary and sometimes contradictory. He is said to have been born into a Brahman family in the southern Indian city of Madurai around 704, at a time when Buddhism was well into its long decline in the land of its birth.

According to the most commonly accepted story, while traversing the South China Sea, Bodhisena suffered a shipwreck. But he was saved by an Indian by birth who was trading pearls in the kingdom of Champa in what is now Vietnam. His savior became a monk, taking the name Foche, and became Bodhisena’s travel companion to China and eventually Japan.

After their fated meeting, the two compatriots traveled on to China together since Bodhisena had heard that an incarnation of Manjusri, the bodhisattva of visionary insight to whom he was especially devoted, was living at Mount Wutai. However, upon reaching that North China Buddhist center, he was told that Manjusri had moved on to Japan.

While in China, Bodhisena met an official party from Japan, and was invited to accompany them back to Japan.

Not long after landing on Japanese shores in 736, Bodhisena encountered the Japanese monk Gyoki. Bodhisena recognized Gyoki from a previous life when they had been comrades in the city of Kapilavastu, the capital of the Shakya clan to which Gautama Buddha, the historical Buddha, belonged. He also discerned him to be a rebirth of Manjusri.

Gyoki took him to the capital of Heian-kyo at Nara and introduced him to the Emperor. 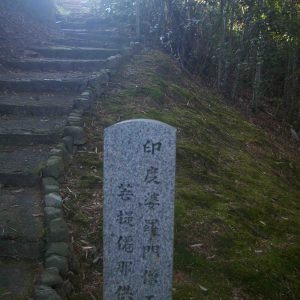 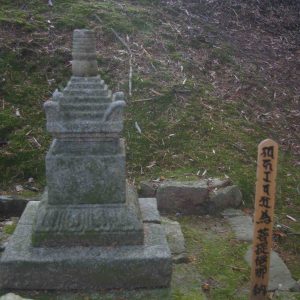 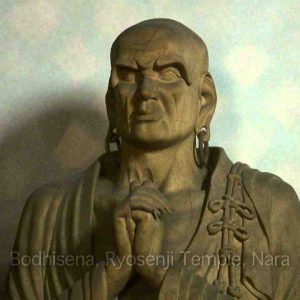 Later, during a visit to Mount Tomi near Nara, Bodhisena discovered that the topography bore a striking resemblance to Vulture Peak, where Gautama had preached some of his most important sermons, including the contents of the Lotus Sutra. Gyoki had informed him that they had been together at Vulture Peak with the Buddha.

Incidentally, this same Vulture Peak, according to the Zen tradition, is the location where the first mind-to-mind transmission of the dharma took place when the Buddha held up a flower, but no one grasped his message except his disciple Mahakashapa, who smiled in response.

A retreat named Ryosenji was built for the Indian monk at Mount Tomi, and that is where Bodhisena was cremated and buried. He died at age 57, or 25 years after coming to Japan.

After reading all of this background, I felt compelled to make a trip to Ryosenji. Located about eight kilometers from central Nara near Tomio Station, it is the third stop on the Kintetsu Nara line from Kintetsu Nara Station.

The temple is indeed in a lovely spot backed by low hills, and surprisingly spacious, with several architecturally interesting buildings, some designated important cultural assets, spread out on the hillside. It also houses a restaurant and baths featuring yakuso medicinal plants.

Bodhisena’s “grave” — actually a kuyoto or memorial tower erected for the repose of a dead person’s soul — is to be found by itself on the hillside off to the left, below the main graveyard.

There is also evidence, albeit scanty, that some Japanese visited India around this time. One record states that the Japanese monk Kongo Sanmai (whose Sanskrit name was Vajrasmadhi) reached India via Tang China, and studied at the great Buddhist intellectual center at Nalanda. 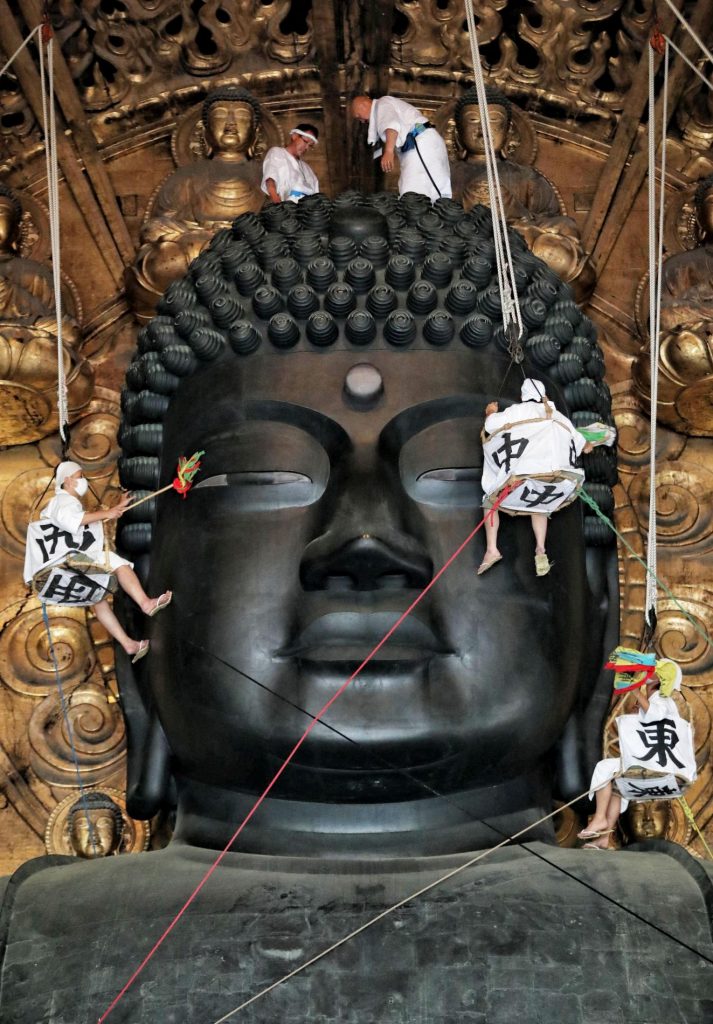 Bodhisena’s coming to Japan and officiating at the Todaiji dedication was not just a historical oddity. He had an immense cultural impact.

For one thing, he and Foche appeared to have introduced instrumental music and court dance and music from India, preserved up to today by the imperial household and performed during important state occasions. It was Foche who orchestrated the ceremonial dance and music extravaganza at the kaigen ceremony.

In addition, while living at the Daianji temple in Nara, Bodhisena, popularly known as Baramon Sojo or the Brahmana Bishop, expounded on the meaning of the esoteric Huayan Sutra and taught Sanskrit. In fact, he is considered a founder of the Kegon (Huayan) school in Japan.

Later, at the beginning of the ninth century, the famed priest and culture hero Kukai (Kobo Daishi, 774-835) journeyed to China, where he studied Sanskrit under the Indian monk Prajna. Upon his return to Japan, he used his study of the Sanskrit alphabet to develop the 50-sound iroha syllabary, on which the hiragana and katakana writing systems are based. However, some scholars believe that it was the form of Sanskrit earlier introduced by Bodhisena that suggested the arrangement of iroha sounds. 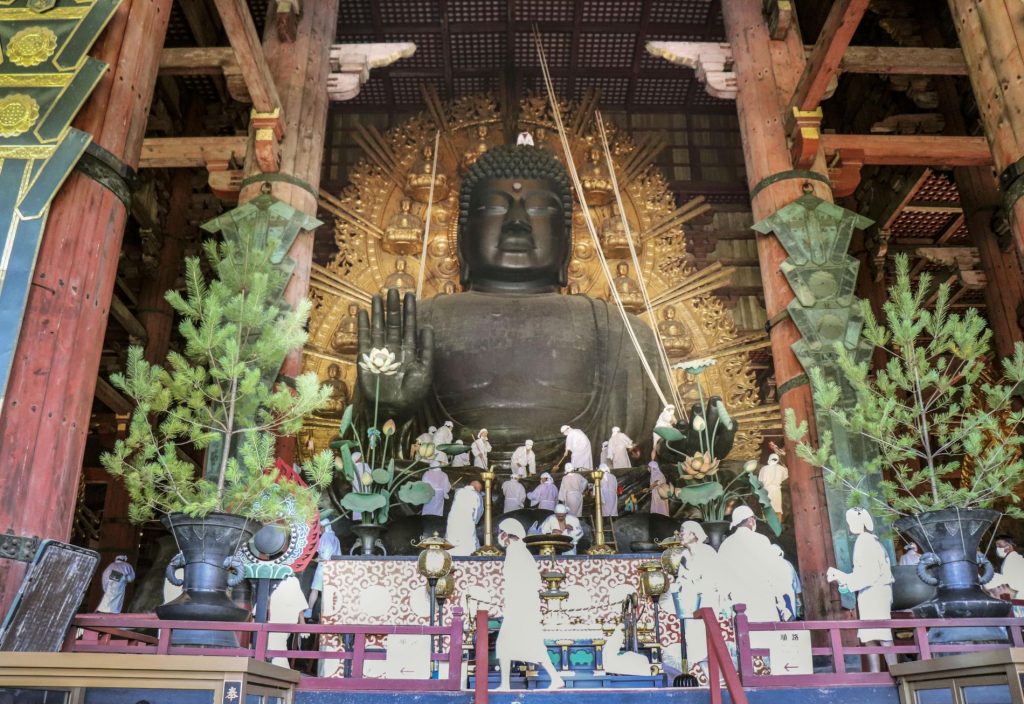 The Great Buddha at Nara is truly an awesome sight, and this largest bronze statue in the world housed within the second largest wooden building on the face of the earth is certainly worthy of its designation as a UNESCO World Heritage Site.

However, neither is the original. Both were destroyed in their entirety by earthquakes and other natural disasters and marauding samurai during the intervening centuries, only to be recreated on more than one occasion. The only thing left of the original statue are some of the intricately-carved petals of the lotus flower base.

What boggles the mind is that the original great hall was at least one-third larger than the current structure. It measured roughly 50 meters by 86 meters and had 84 massive cypress pillars. Whole forests were denuded to supply the necessary high-quality timber.

Furthermore, the main building was flanked by two nine-story pagodas. The Buddha statue itself is estimated to have weighed 500 tons and stood 16 meters (52 feet) high, while 163,000 cubic feet of charcoal were used in the casting.

Such a colossal undertaking did not come cheaply, whether in terms of money or labor. A special tax was levied on every inhabitant of Japan, and 2.6 million workers took part in some aspect of the construction.

Priests traveled the land collecting donations. Undoubtedly, not all the craftsmen involved were Japanese. The Great Buddha symbolized a Buddhist unity transcending borders.

The costs of the project were indeed staggering, and perhaps it is no coincidence that the central government began to slowly lose its grip on the provinces in the centuries that followed. Could it be that the Nara Daibutsu was one of the factors leading to the rise of the samurai class? 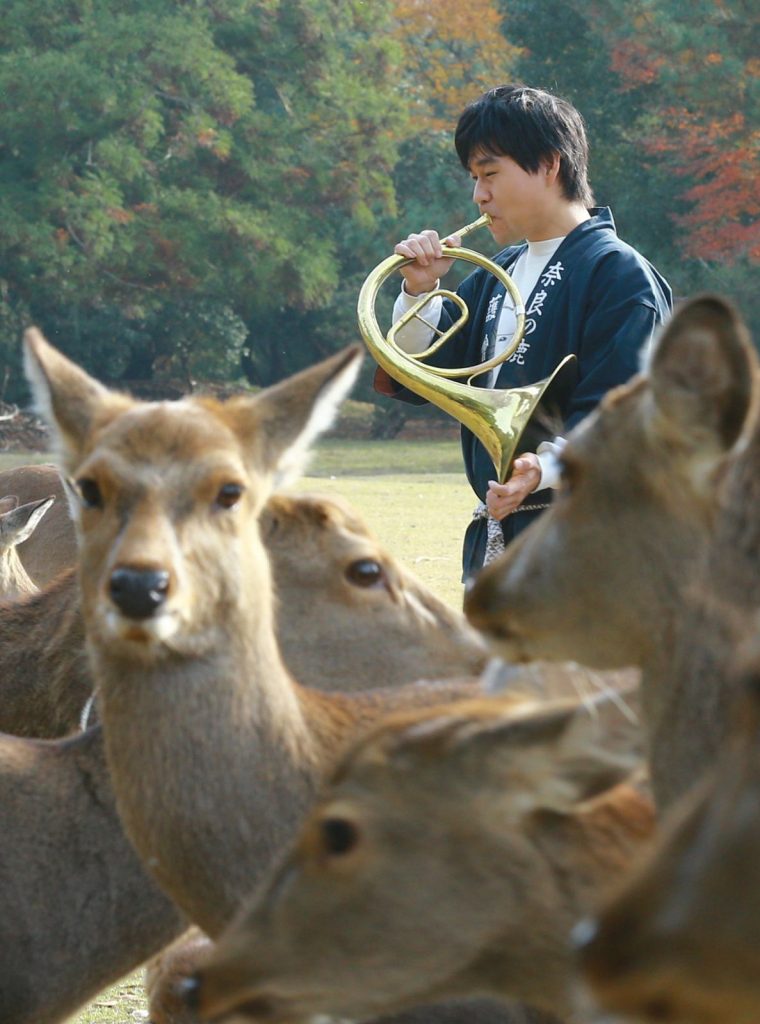 The ubiquitous deer of Nara

I would note that, during the first two weeks of March every year, Todaiji becomes the site of the solemn and mysterious Water-Drawing Ceremony (Omizu-tori Matsuri), which peaks on the night of March 12-13.

The world-famous Omizu-tori Matsuri takes place in the middle of the night, with priests showering sparks from enormous torches up to eight meters in length down on throngs gathered below the balcony of the Nigatsudo Hall. This rite has remained essentially unchanged for nearly 1,300 years.