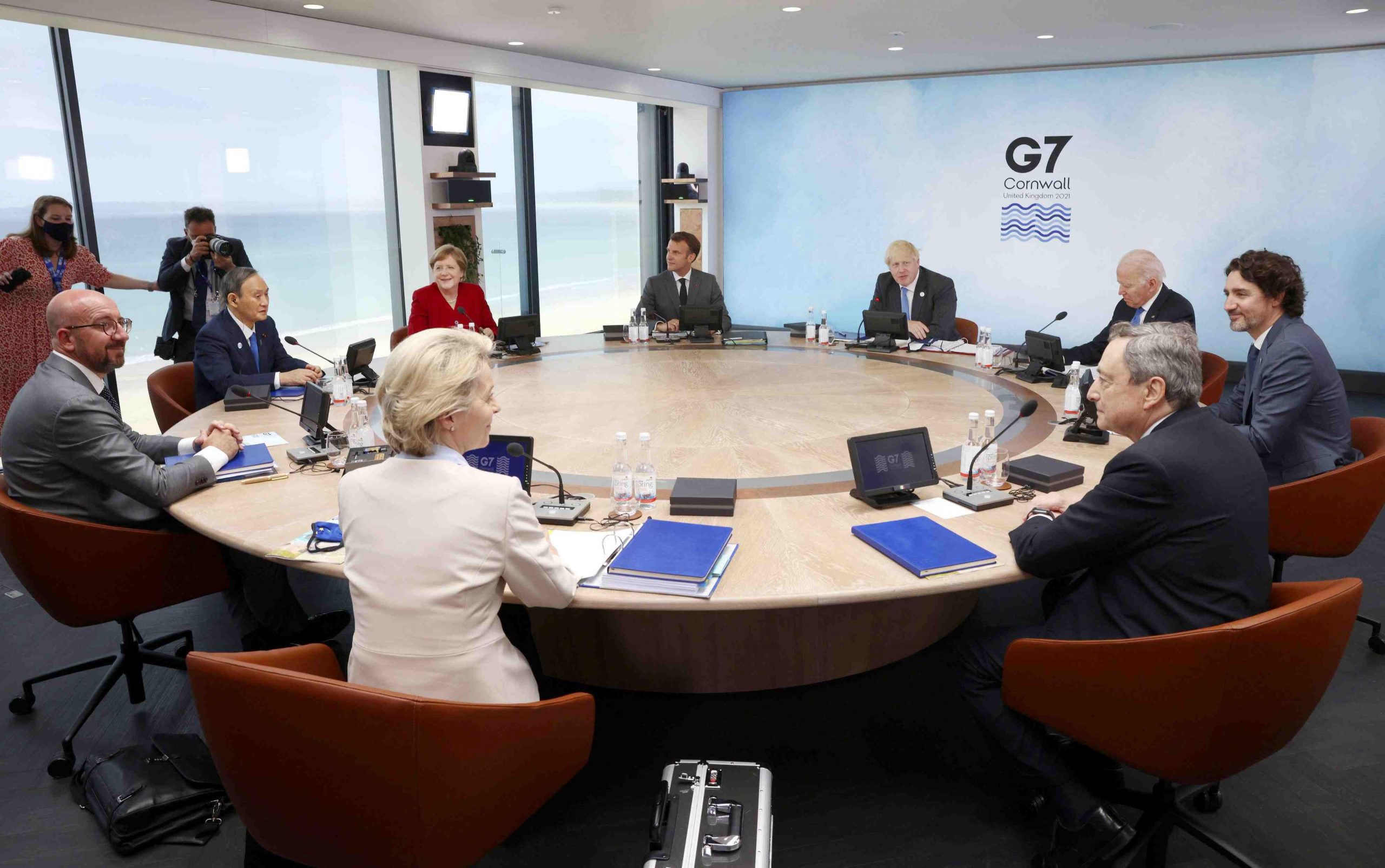 Part 1: Evidence Stacks Up: COVID-19 Emerged from the Wuhan Lab


Amid growing controversy over the SARS-CoV-2 virus potentially originating from the Wuhan Institute of Virology in China, the June 13, 2021, Carbis Bay G7 Summit Communiqué’s call for a “timely, transparent, expert-led, and science-based WHO-convened Phase 2 COVID-19 Origins Study” in China needed far more emphasis than it was actually given.

The Group of Seven leadership confronted China and the threat of future pandemics during its first physical summit since 2019. Yet, the failure to prod Beijing to provide earnest and intent cooperation comes across as a major disappointment.

The G7 is the epitome of an international coalition capable of imposing heavy costs on China. Both the Chinese government and the Chinese Communist Party have profited immensely from access to an orderly, rule-based world, and continue to need access to the bulk of the world economy. For the G7 to glibly expect “improving the speed of response by developing global protocols which trigger collective action in the event of a future pandemic” does not reflect the urgency of the conditions created by this pandemic.

Besides, the China references at the G7 revealed divisions putting the United States, the United Kingdom, Canada, and Japan at odds with Germany, France, and Italy.

Sanctions often are a multilateral effort. In some cases, certain states have operative legal provisions to impose sanctions.

The U.S., for instance, possesses intricate laws with provisions for economic sanctions. Section 307 of the Chemical and Biological Weapons Control and Warfare Elimination Act of 1991 directs the U.S. president to stop “foreign assistance, arms sales and licenses, credits, guarantees, and certain exports” to the governments of states that have “used or made substantial preparation to use chemical or biological weapons.” Penalties could include both criminal and administrative sanctions, such as imposing new and tougher tariffs, non-tariff barriers, relocation of manufacturing, and multiple other policy decisions.

Britain, for that matter, has come to the forefront in demanding answers. Its health minister, Matt Hancock, freshly called for a fully independent investigation into the origins of COVID-19, asking for it to be allowed to take place “without interference in China…unencumbered…[because] we do need to get to the bottom of this.”

Hancock’s demand appears to be a follow-up to input received from British intelligence, which believes that the COVID-19 “lab leak theory” could well be feasible. Moving forward from the time when the possibility of a lab-leak was considered to be remote, the British intelligence agencies (and their counterparts in the West), in a major shift, have reassessed the information available to them and now believe it to be “feasible” that the COVID-19 pandemic began with a SARS-CoV-2 virus leak from a Chinese bioresearch laboratory and are “investigating a possible leak from the Wuhan institute of Virology.”

The United Kingdom’s Minister for Vaccine Deployment, Nadhim Zahawi, has demanded that the World Health Organization must fully investigate the origins of the deadly virus, adding that it is vital that the WHO is “allowed to conduct its investigation unencumbered” as it seeks to better understand how the initial outbreak began.

It is improbable to expect Beijing to heed the G7’s call for a “timely, transparent, expert-led, and science-based WHO-convened Phase 2 COVID-19 Origins” study in China. Beijing shall likely continue with its denial, cover-up, noncompliance, and deceitful tactics to derail Phase 2 of the Wuhan investigation.

China has yet to come clean on how this virus originated. No data has been declassified or shared publicly. Understanding the origins of the COVID-19 virus holds the key to preventing another such humanitarian crisis.

Verifying data on the ground holds the key. The WHO’s earlier investigation into the origins of the pandemic concluded that the risk of an accidental leak from the Wuhan Institute, was “extremely low.” The WHO report settled for “introduction through a lab incident was considered to be an extremely unlikely pathway.”

This probe received widespread condemnation by the U.S., U.K., and many other governments, given China’s limited cooperation in terms of providing limited, heavily regulated access to the sites, records, firsthand accounts, original data, and samples. In all, the limited access pointed toward a complete clean-up of the scene, executed before the WHO team arrived in Wuhan.

Furthermore, if China has been fully transparent about the virus and related aspects, why has it not been forthcoming to support an independent international inquiry into the origins and how it spread? Among the most dubious points against its independence is the fact that the WHO study was co-authored by 17 Chinese scientists, many of them employed at Chinese state-run institutions.

In addition to the U.K., leaders of the European Union, too, have joined calls for a full investigation into the origins of the virus. The President of the European Council Charles Michel declared “support for all the efforts to get transparency and to know the truth.” In a conference preceding the G7 summit, he said, “The world has the right to know exactly what happened to be able to learn the lessons.”

India, perhaps, is among the very small handful of countries to have called for action against biological weapons. The Parliamentary Standing Committee on Health and Family Welfare presented its 123rd Parliamentary Standing Committee Report on the Outbreak of Pandemic Covid-19 and its Management to the Upper House of India’s Parliament (Rajya Sabha, November 2020). Without naming any nation, the report suggestively refers to themes including “Strategy of the Government to ensure Biosecurity against Biological Weapons” in the context of COVID-19.

The report drew the committee’s attention to the fact that COVID-19-like viruses infecting large populations across the globe and emerging as a pandemic could be used as biological weapons against enemy nations. Biosecurity therefore is a critical area of concern.

In the report, India’s Department of Health submits that a holistic approach is needed for ensuring biosecurity against biological weapons, including, among others:

The committee went to the extent of linking biological weapons to the threat of bioterrorism, and underlined “the need of biosafety to protect the world community from any activity signaling bioterrorism.”

The report added, “COVID-19 pandemic has taught the lesson on the importance of controlling biological agents and the need of strategic partnerships among different nations.”

The committee recommended that the Indian government should formulate effective laws to counter bioterrorism and agreed with the ministry that a holistic approach is needed for ensuring biosecurity against biological weapons.


It Takes Knowledge to Counter the Risk

In April 2020, the Australian government urged an independent inquiry into the origins of COVID-19, to which Beijing instantly retaliated with punitive trade sanctions, demonstrating its tried and tested policy for seeking to make “defiant nations tremble and obey.”

Australian Prime Minister Scott Morrison sought support for a push into an independent review of the origins and spread of COVID-19. Australia has long questioned Beijing’s transparency over a pandemic that has paralyzed the world for a year and half now.

The seemingly ceaseless resurgence of the COVID-19 with successive waves hitting nations revives multiple questions surrounding the nature of biological weapons and their role in defining the future of warfare. Is the concept of conventional warfare turning obsolete?

According to latest fatality figures, COVID-19 has caused 3.87 million deaths globally, without a single shot being fired. The pandemic has destabilized economies in some cases and demolished them completely in others. Global poverty and hunger have reached disturbingly high levels. The data highlights that the socio-economic impact of this pandemic has become even more devastating than the pandemic itself.

Dealing with the risks of potential biological weapon threats should be the top priority for the G7. While its leadership remains committed to curbing future pandemics, the G7 and leading democracies need to act together and induce China to release complete and truthful information on the origins of COVID-19 and effectively halt its dangerous viral research activities, or else face punitive retaliatory penalties.

Dr. Monika Chansoria is a senior fellow at The Japan Institute of International Affairs (JIIA) in Tokyo. The views expressed here are those of the author and do not necessarily reflect the policy or position of the JIIA or any other organization with which the author is affiliated. She tweets @MonikaChansoria. Find other articles by Dr. Chansoria here on JAPAN Forward.