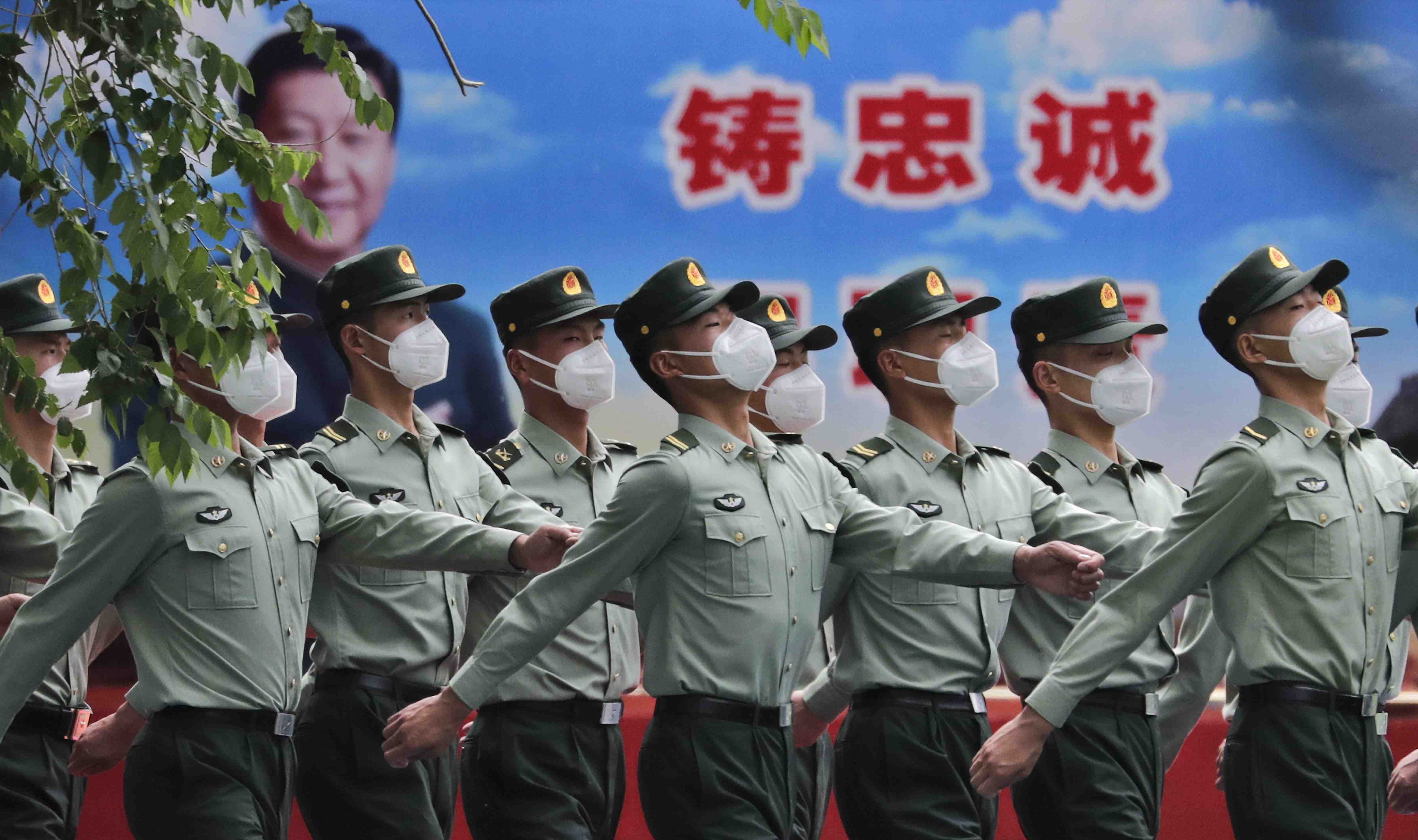 Soldiers of the People's Liberation Army march past a poster of Xi Jinping in front of the Great Hall of the People in Beijing, Monday, May 25, 2020. (AP Photo/Andy Wong)

It is well established among observers that Chinese leaders think, and implement, long-term in a real sense.

On March 13, 2021, China’s National People’s Congress (NPC) approved the outline of the country’s 14th Five-Year Plan (2021-2025). Unlike previous plans, it does not set a growth target for the entire five-year period, settling instead for growth targets to be set annually and kept “within a reasonable range.”

The 14th Five-Year Plan puts forth 20 main indicators for development. Significant among them are several measures and initiatives announced by the Chinese government to accelerate military-technology development.

In a communiqué issued in October 2020 by the Central Committee of the CCP, a key target during the 14th Five Year Plan was making “major strides in the modernization of national defense and the armed forces.” There were numerous references to the need for deepening and expanding synergies between commercial and military technologies that would prove instrumental in advancing the capabilities of China’s People’s Liberation Army (PLA). This strategy has come to be termed as “‘civil-military fusion.”

The CCP communiqué went on to state, “We must improve the quality and efficiency of national defense and military modernization; promote simultaneous improvements in national defense and economic strength; build an integrated national strategic system and capabilities; promote the coordinated development of key areas and emerging fields; optimize the layout of defense technologies and industry; and consolidate military, political, and military-civilian unity.”

The references in the statement to integrated systems, emerging fields, and military-civilian unity significantly point towards China’s objective of merging advanced civilian and military sectors under the civil-military fusion strategy, to be supported through China’s second medium- and long-term science and technology development plan running from 2021 to 2035.

It needs to be underscored here that China’s national strategy of military-civil fusion (军 民 融 合) is a continuing policy decision which highlighted biology as a priority in the previous 13th Five-Year Special Plan for Military-Civilian Integration Development (September 2017).

The Party Central Committee, State Council, and the Central Military Commission put in motion the full implementation of the development strategy of military-civilian integration in the field of science and technology in accordance with the 13th Five-Year Plan for PRC’s National Economic and Social Development.

Given that Chinese military strategists have been studying potential “genetic weapons” and their possibility of ensuring a “bloodless victory,” a special fund for researching military-civilian integration has been set up to focus on supporting basic national defense research projects in the fields of biological crossover and disruptive technologies. China’s “civil-military fusion” is working to transform civilian research fundamentally to military applications.

Interestingly, “technology-military-civilian integration projects” were identified as among the key tasks of the September 2017 plan.

The national research and development (R&D) plan incorporates the fields of biology with dual use features to accelerate the formation of new productivity and combat effectiveness in scientific and technological achievements. The plan also aims to strengthen the capability of military and civilian science and technology collaboration, innovation, and implementation.

Study of the Chinese military’s interest in biology as an emerging domain of warfare needs to be deliberated in the context of the SARS-CoV-2 virus that causes the COVID-19 infection. There are increasing indications that the predator coronavirus probably originated from a laboratory at the Wuhan Institute of Virology.

The facility is known for conducting classified military research ー and concealing it ー thereby sending alarm bells ringing on the murky reality of every one of China’s such laboratories. As state-owned enterprises, they are operated and controlled entirely by the PLA or its subsidiary units. That the Chinese Communist Party may well have employed this as a bioweapon to unleash a biological war on the world cannot be shelved as a conspiracy theory any longer.


The Road to ‘National Rejuvenation’

The 20-year backdrop put forth by Chinese military thinkers of laying emphasis on the biological frontiers of warfare has become a defining feature of the scenario of what China might look like by 2050. Biological weapons and their employment as a disruptive technology could well pave the way for a dominating, controlling China as it realizes its grand strategy within Asia, fulfilling most, if not all, of its long-term goals.

In the contemporary context, China ostensibly has not hesitated to employ as many means of warfare as possible, including the Chinese leadership’s emphasis on “technological independence” and “indigenous innovation” in the introductory chapter on innovation in the 14th Five-Year Plan.

The plan names seven “frontier” technology fields in which it says the state should cultivate domestic capabilities through major national science and technology projects. They include New Generation Artificial Intelligence, Quantum Information, Neuroscience and Brain-Inspired Research, and Genetics and Biotechnology, among others.

To assess China’s grand strategy labeled as “national rejuvenation,” the present (14th) and previous (13th) Five-Year Plans need meticulous evaluation. Corresponding linkages between high-level policy direction and goals of the Chinese government ー with activities and implementation on the ground ー need to be ascertained. Analyzing the components of China’s national strategies of diplomacy, economics, science and technology, and military affairs will remain the key as China pursues its goal of becoming militarily commanding by 2050.

The CCP leadership under Xi Jinping has pursued an exceptional set of national policies to fulfill the overarching goals of its grand strategy. Where do the Wuhan-originated SARS-CoV-2 virus and its humanitarian and economic fallout fit within this strategy? Have Beijing’s defining long-term strategic objectives been met successfully?

Beijing’s decades of fixation on its “win-win” slogan would appear to have been more than fulfilled in this case. The exacerbating perceptions of the long debated China threat likewise appear to be here and now.

Dr. Monika Chansoria is a senior fellow at The Japan Institute of International Affairs (JIIA) in Tokyo. The views expressed here are those of the author and do not necessarily reflect the policy or position of the JIIA or any other organization with which the author is affiliated. She tweets @MonikaChansoria. Find other articles by Dr. Chansoria here on JAPAN Forward.