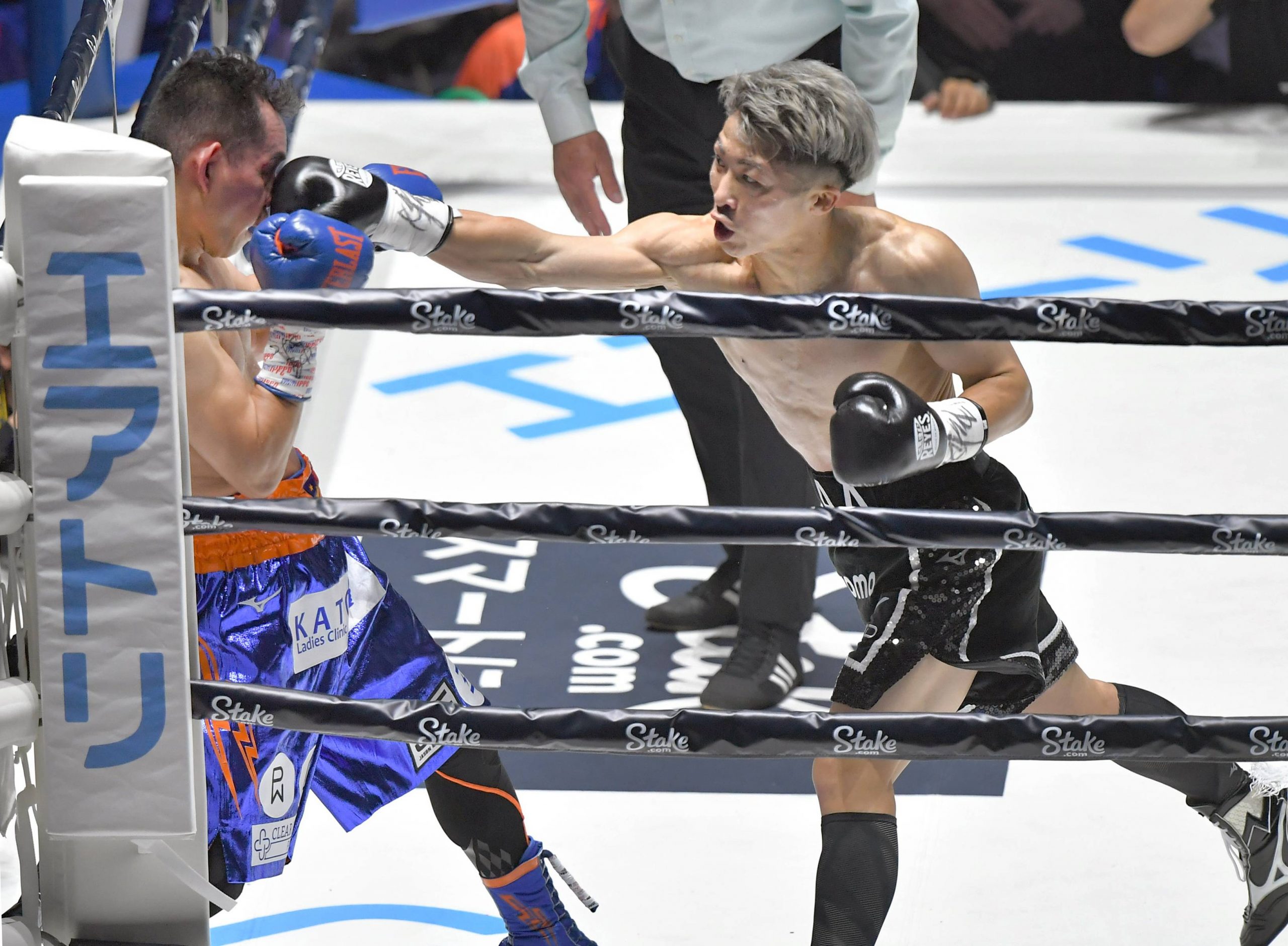 Naoya Inoue punches Nonito Donaire in the second round of their bantamweight unification title fight at Saitama Super Arena on June 7. (ⒸSANKEI)

The hard-punching native of Zama, Kanagawa Prefecture, quickly accomplished the feat against Filipino veteran pugilist Nonito Donaire (42-7, 28 knockouts) before a crowd of 17,000 at Saitama Super Arena on Tuesday, June 7. Via a technical knockout at the 1:24 mark of the second round, Inoue improved to 23-0 (20 KOs).

Inoue’s WBA and IBF world title belts were on the line against Donaire’s WBC title, and it was clear from the get-go that the Japanese superstar’s youthful exuberance, speed and punching power would be the defining traits of the fight.

Just before the first round ended, Inoue landed a strong right-hand punch to Donaire’s head, producing a painful knockdown. It was his answer to the Filipino’s lone bright spot of the fight: a left hook that grabbed Inoue’s attention.

Inoue said, “In the very first round, I received the left hook from Nonito, and that punch made me wake up and I stayed focused for the [rest of the] fight.”

There was more of the same in Round 2 as Inoue continued to attack the 39-year-old Donaire, who is 10 years his senior.

Overpowering combinations of punches inflicted more pain on Donaire as he sought to counterattack. But Inoue was faster and in control and dictated the tempo of the title fight before a lively crowd. From Monster’s pugilistic repertoire, hooks, jabs and straight punches made an imprint on body and cranium.

Left hooks proved to be the key to finishing off Donaire. Thirty seconds into Round 2, a sharp left landed on its target.

Monster did it again less than 30 seconds later, with two more left hooks continuing the thematic pattern of the round.

During the post-fight interview in the ring, Inoue discussed his fight strategy before a captivated audience, which was buzzing with excitement about the quick finish.

“I came back here at the same venue. You gave me power,” Inoue said to the crowd.

In his quest to become the undisputed bantamweight world champion, Inoue set a goal of claiming Donaire’s title.

After the fight, he proclaimed, “To be able to reach my status at the top, I needed to win the fight.”

Instead, Monster made sure that the fight wouldn’t go the distance.

A Rematch at the Same Venue

Tuesday’s fight was dubbed “The Drama in Saitama 2,” the sequel to their entertaining, all-out slugfest on November 7, 2019, in a World Boxing Super Series showdown at the same venue.

Inoue’s victory by unanimous decision was celebrated by boxing fans and pundits alike, and it was named The Ring magazine’s 2019 Fight of the Year, giving “The Drama in Saitama” a notable place in the annals of the sport.

Entering their rematch, Inoue was coming off an eighth-round technical knockout of Thai challenger Aran Dipaen on December 14, 2021, at Ryogoku Kokugikan.

In the run-up to their highly anticipated rematch, Donaire said that his sole focus was to become the holder of all four major bantamweight title belts. England’s Paul Butler is the WBO champion, and the first step to achieving that goal involves dethroning Inoue.

“I’m driven by beating this kid. I’m driven by being undisputed. That’s the only thing I don’t have on my résumé,” the boxer known as “The Filipino Flash” said in a story published a day before the fight by boxingscene.com.

This time, there was no drama in terms of points on judges’ scorecards. Inoue made sure of that ― with the knockdown in the first and the sustained flurry of punches that ended Donaire’s night before the end of Round 2.

Before leaving his in-the-ring interview, Inoue said that he glanced at a video replay of the punch that capped a rapid-fire sequence of fistic combinations ― pinpoint body shots that destroyed Donaire’s goal of retaining his title ― and knew that he had fulfilled his mission.

“I knew that was going to be the one,” was how he described the big punch.

He called the victory the result of sticking to his fight plan of aggressive tactics.

“I pressured myself and I did it,” said Inoue, who added that “I am capable of raising my [weight] division and fighting at a higher division.”

In an online story capturing the views of boxing insiders, The Ring magazine polled 20 individuals asking them to predict the outcome of the fight. It was unanimous: All 20 selected Inoue.