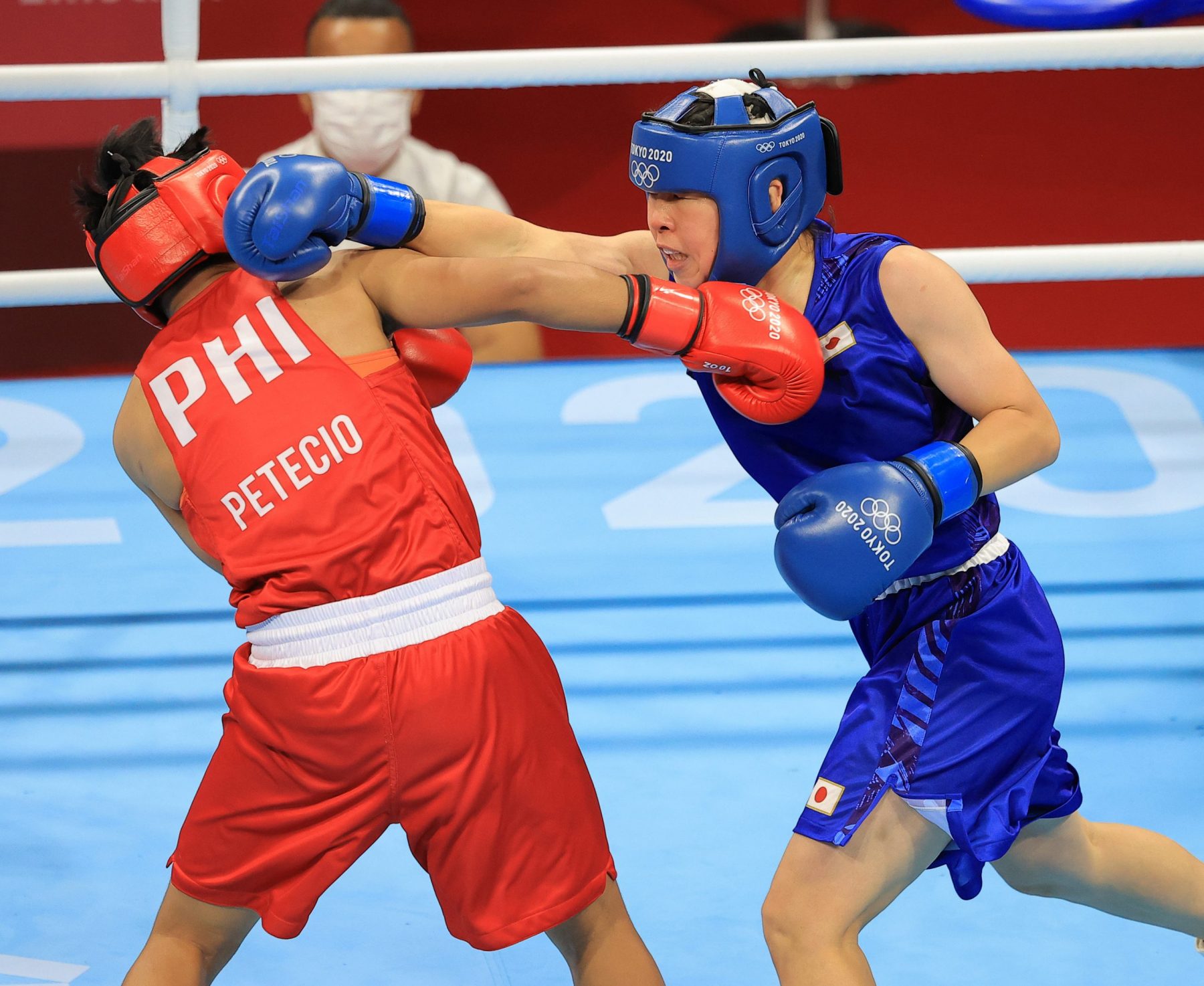 Sena Irie (right) fights Nesthy Petecio of the Philippines in the women's featherweight final on August 3 at Kokugikan Arena.

Sena Irie relied on solid fundamentals and persistent punches to score a convincing victory over the Philippines’ Nesthy Petecio in the women’s featherweight final at Kokugikan Arena.

Irie won the gold-medal match over the reigning world champion by unanimous decision on Tuesday, August 3.

Deploying effective defensive techniques and graceful footwork throughout the fight, years of training and dedication in the ring paid off for the featherweight third-place finisher at the 2018 Youth World Boxing Championships in Budapest.

Irie was ahead on all five judges’ scorecards 10-9 after the opening round, but Petecio won the second round 10-9 on four of the five judges’ cards, with one judge giving the round to Irie. All five judges meted out identical scores in the third round: Irie 10, Petecio 9.

When the winner was announced, Irie jumped for joy with both hands raised high above her head. It was a magical moment.

The two combatants cheered for one another as the medals were awarded later on. The women’s featherweight division was contested for the first time at the Tokyo Olympics.

“After every punch I was able to go past the punches and get a punch in, which is why I was able to win,” Irie said, looking back on the fight. “The opponent was very strong so even though I was guarding, I was being pushed back so I thought that I had lost. But I am really glad to have won.”

Irie’s cheerful disposition during her ring entrance gave way to a laser-focused pugilist using her fists to get the job done.

She led with her left hand, peppering her opponent with jabs and successfully landed several straight right-hand blows in the opening round.

While clutching and grabbing disrupted the flow of punches and counterpunches in the bout, Irie, a 20-year-old from Yonago, Tottori Prefecture, delivered more punch combinations and convinced the judges that she was in control from start to finish.

In one of her best highlights of the fight, Irie popped the 29-year-old Petecio in the head gear with a straight right late in the first round.

In the second round, Irie showed more of the same aggressive counterpunching to match her opponent’s fistic arsenal. By the end of the round Petecio had evened things up with a more effective punching

With about 35 seconds left in the final round, Irie delivered a sharp left body blow that landed squarely on Petecio. Seconds later, she hit Petecio in the midsection.

While Irie employed a defensive posture, she also stayed on the offensive with effective solo punches and combinations.

Petecio gave Irie all she could handle.

She admitted as much after the fight, praising the power behind her opponent’s punches.

“It was important to stay aggressive,” Irie stated, according to Kyodo News. “I could land many jabs in the first round. That was the best of me today.”

When it was over, the  two fighters embraced.

Petecio took the loss in stride. And the pride of the Philippines touched the hearts of people around the world with her post-fight remarks.

In the whimsical afterglow of the fight, Irie admitted she was on Cloud 9.

“I feel like I am in the middle of a dream,” the new Olympic champion told reporters. “It hasn’t sunk in yet, I just want to keep gazing at this medal.”

In an earlier bout on Tuesday, Japan’s Ryomei Tanaka outpointed Colombia’s Yuberjen Herney Martinez Rivas to win their men’s flyweight quarterfinal bout. Four of the five judges scored the fight 29-28 in Tanaka’s favor, while the other declared the Colombian the winner by the same score.

Tanaka will face Carlo Paalam of the Philippines in a semifinal match on Thursday, August 5 at 2:30 p.m.