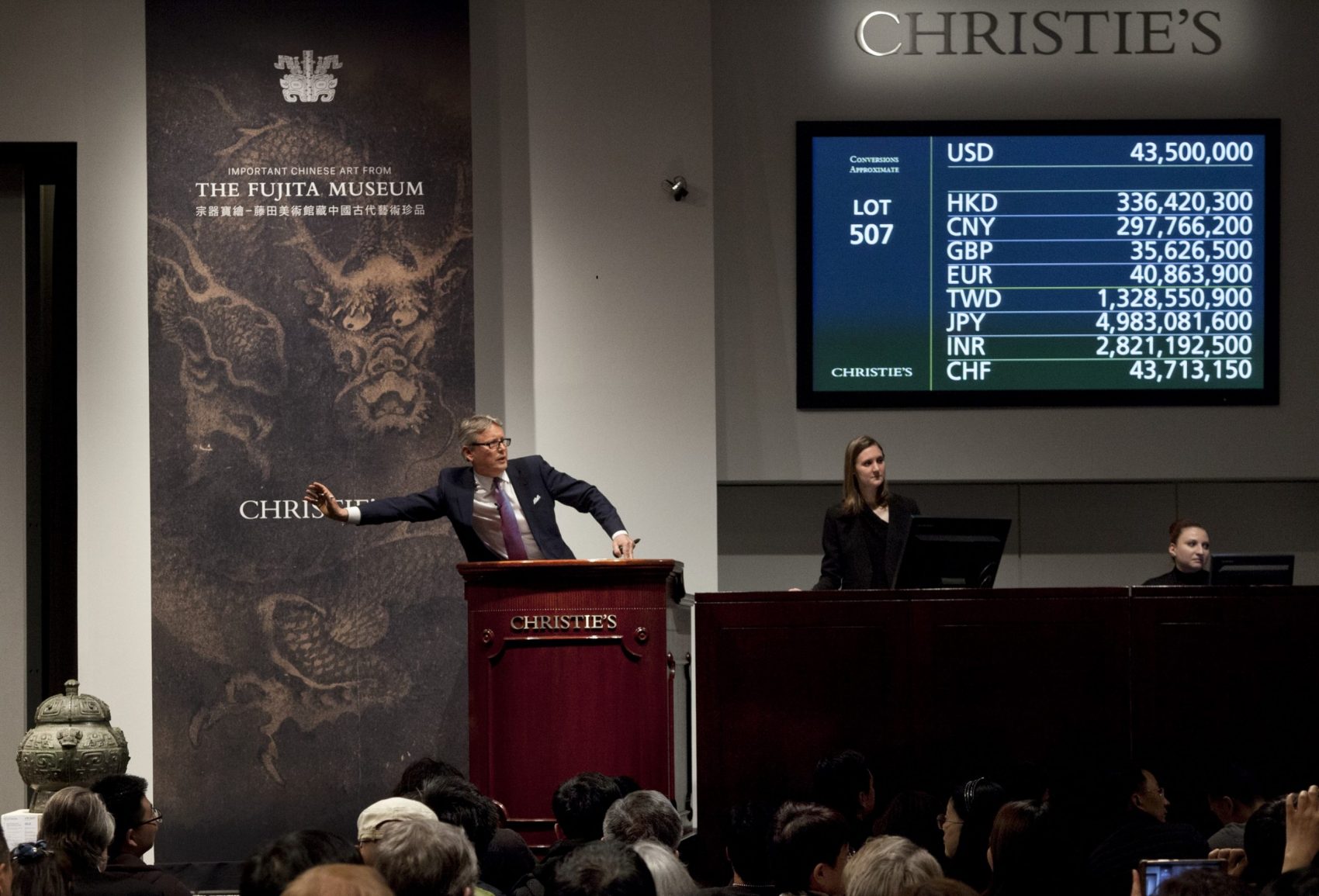 A scene from the Christies Fujita auction. (Photo courtesy of Christies Japan)

Since I started working for the international auction house Christie’s as an expert in appraisals and assessment for Japanese art, I have been put in charge of auctions, based mainly in New York.

Three years ago, upon becoming President of the Japan branch of Christie’s and returning to my country after 17 years, I am once again encountering many opportunities that make me think about the fluidity of art and how art can be passed on to future generations. This is because in recent years, as if it were in sync with my return to Japan, I have been involved in projects with overseas Japanese art pieces that have been “coming home” one after another.

Christie’s not only conducts auctions, but also negotiates “private sales” between seller and buyer. And in recent years, I have been specializing in the latter. With auctions you cannot choose your buyers, but with a one-on-one transaction, for example it will be easier to mediate the return of a fusuma (sliding door) painting from overseas to a temple where it originally came from.

Through fate, I actually had the opportunity to help bring home to their “proper place” a total of 13 fusuma panels, including the “Gunsenzu”, “Kinkishogazu” and “Bashozu”, which are part of the fusuma collection of Kyoto’s Ryoanji Temple that were sold off during Haibutsu Kishaku ー a movement to abolish Buddhism ー during the Meiji Period. Twenty-seven panels currently exist.

Especially with the “Gunsenzu” fusuma, I had the rare experience of auctioning it twice over a course of time. It is part of the Ryoanji fusuma collection that is even housed at the Metropolitan Museum of Art (New York).

The fact that such a historical temple treasure should appear on the market is rare in itself. But the fact that the temple decided to make the purchase during its second auction, moved me deeply with the idea that a work of art should be housed where it is meant to be housed.

Moreover, how can I describe it as anything but “fate” that after an astonishing 123 years, during a private sale in 2018, we were able to return to the same temple, the “Bashozu” fusuma painting, which was owned by an English private collector.

Such homecomings of Japanese art are generally welcomed. However, our job of course involves both the outflow and inflow of art works.

Exporting ancient Japanese art overseas is often perceived negatively, and exportation of national treasures and important cultural properties is generally prohibited. However, because they are housed in renowned museums overseas, people around the world are able to come more in contact with Japanese culture. Thus there will be an increase in interested people making visits to Japan.

It is also true to say that artworks play the role of something similar to “cultural diplomacy”.

Through exhibitions, many of you have probably seen the “eccentric” artworks introduced in the Etsuko and Joe Price Collection, most notably works by the mid-Edo period painter Itō Jakuchū. Two years ago, 190 pieces from the Price Collection were returned to Japan and were housed in the Idemitsu Museum in Tokyo, a project I was also able to help with.

As I mention in my book, Jakuchū no Himitsu (PHP Publisher, 2021),  the Prices, who had already decided on donating half of their collection to the Los Angeles County Museum of Art, wished to sell the remaining half to public spaces such as Japanese museums. They said that it gives meaning to their collection over the years when it can support researchers making their way between Japan and the U.S. in order to promote cultural exchange.

Through people, works of art will always remain. I think the greatest part of this job is that I can serve a bridge builder to make the connection possible.

Born in 1963 in Tokyo, Katsura Yamaguchi graduated from Rikkyo University. In 1992, he was hired to work at Christie’s (Headquarters in London, England), one of the world’s two largest auction houses. A specialist in Japanese and Asian art, Yamaguchi has been involved in a number of bridge building projects of renowned works of art, and since 2018, he has been serving as President of Christie’s Japan. He is on the board of directors for the International UKIYO-E Society. His books include, Biishiki no Nedan (Shueisha Shinsho), Biishiki wo Migaku (Heibonsha Shinsho) and Jakuchū no Himitsu (PHP Shinsho).