U.S. Should Stop Downplaying the Potential of China’s Marine Corps 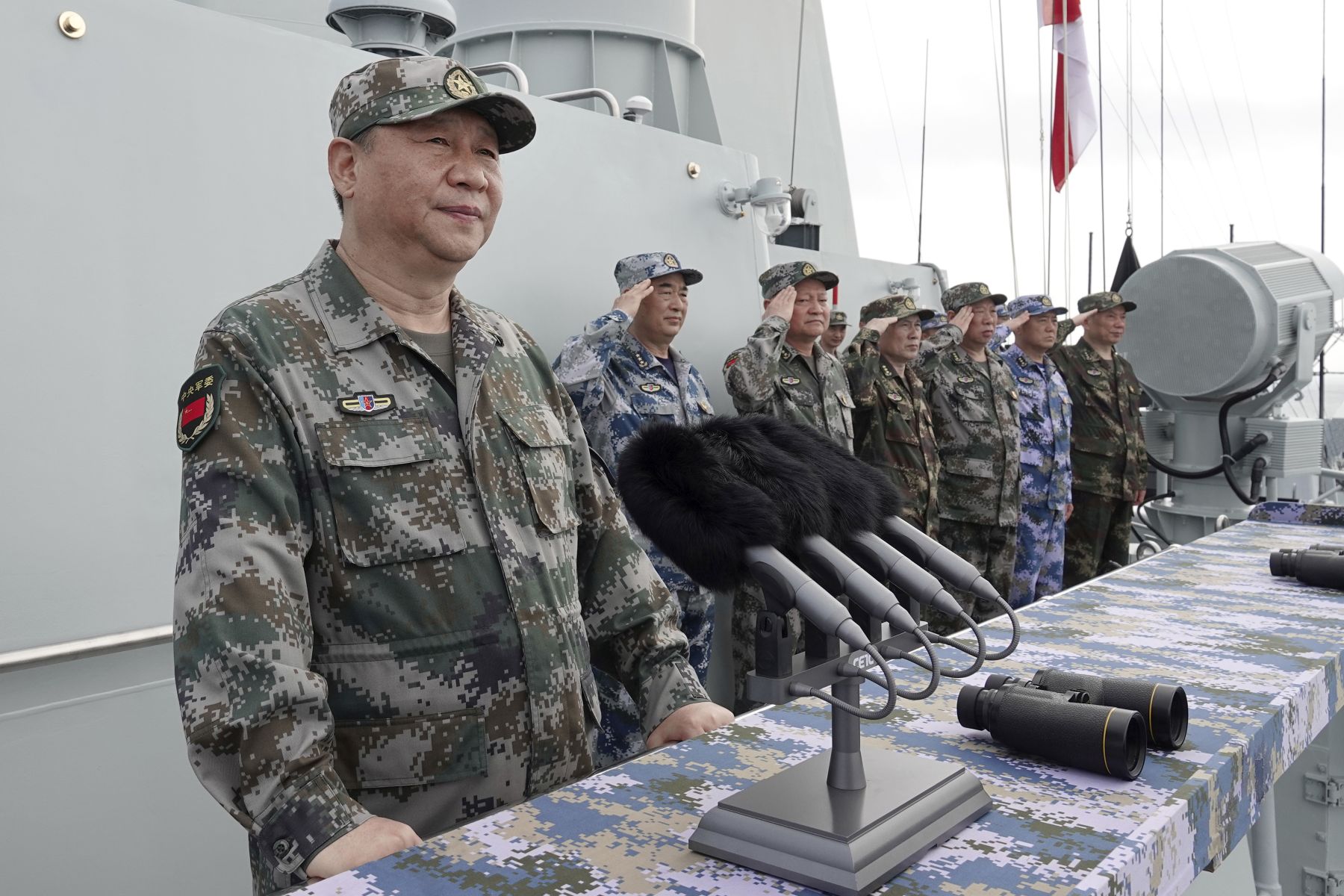 If (or when) the Chinese People’s Liberation Army launches an amphibious assault on Taiwan, the PLA Marine Corps (PLAMC) will play an important role. But the bulk of the invasion force will likely be the PLA’s 50,000 amphibious-trained Army troops.

With an eye on the future and the entire globe, Beijing has more than just Taiwan in mind for the Chinese Marines.

The PLAMC will serve as an expeditionary force securing China’s far-flung overseas interests — in much the same way the United States Marine Corps does for America.

For decades, whenever something happens overseas that requires the United States to quickly employ force or to put “boots on the ground” for humanitarian or any other purpose, one of the two questions asked is: Where are the Marines? The other: Where are the aircraft carriers?

To be ready, Marine Expeditionary Units (MEUs) are on station worldwide or rapidly deployable. One MEU is about 2,200 Marines embarked on U.S. Navy amphibious ships (usually three of them) with their weapons, equipment, and aircraft.

Only the American Marines, with their seven MEUs, have this capability — so far.

But wait a while and PLAMC Expeditionary Units will be making the rounds. If it wants to, the PLA already has the ships and trained manpower needed to deploy a couple of MEUs in the Indo-Pacific, and beyond.

The PLAN (People’s Liberation Army Navy) has over 50 amphibious ships. Some are older ships, though even the Type 072’s might be pressed into MEU service near China. However, the Chinese amphibious fleet is modernizing. The PLAN also has three modern Type 075 amphibious ships — equivalent to the U.S. Navy’s 40,000-ton Wasp class ships — able to handle aircraft and 900 or so Marines. More are on the way, and a more advanced Type 076 is reportedly in the works.

The PLAN also has eight or so modern but smaller Type 071 “amphibs” (equivalent to U.S. San Antonio Class ships) that can embark a battalion of 600 Marines with helicopters.

Importantly, Chinese shipbuilding capacity exceeds American shipyards by far. The Chinese launched the three Type 075’s between 2019 and 2021 — and took about six months to build each ship. That’s fast. During that period, the U.S. Navy launched one large amphibious ship while another, USS Bonhome Richard, burned up pier side in San Diego.

The Chinese Marine Corps expanded from about 12,000 Marines four years ago to nearly 30,000 today. The expansion was partly made by transferring troops from the Army — and not all are yet fully trained as “Marines.” There was talk of increasing the PLAMC to 100,000 Marines, but that will not happen anytime soon.

Like the U.S. Marines, the Chinese Marines train in all sorts of environments: tropical, desert, cold weather, and high altitudes. The PLAMC also aims for mobility and conducts long distance transport exercises within China using Navy and civilian ships, railways, and military and civilian aircraft.

Small units have trained with Russian Marines and Navy off Vladivostok, in the South China Sea, and farther afield in the Baltic region. They have also trained in the Mediterranean and in Tanzania.

PLA Marines have routinely participated in Horn of Africa “anti-piracy” deployments with the PLAN over the last 13 years and received good practice and exposure to overseas operations, logistics, and naval integration.

And after years of swearing it wouldn’t have overseas bases, the PRC established a military base in Djibouti in 2017 — garrisoned by a PLA Marine battalion and its armored vehicles, with the added role of carrying out missions throughout the broader region.

Nearly a decade earlier, a U.S. Marine commander in Djibouti warned of what was coming and was told to “stay in his lane,” and that the Chinese were not “serious” and “had no long term intentions.”

And like the American Marines, PLAMC units are configured for combined arms operations — linking infantry, artillery, armor, and aviation — along with a logistics element. PLAMC has only recently received its own designated aviation component, and that will take time to properly integrate.

Western observers, and U.S. Marines in particular, have tended to downplay Chinese abilities to match U.S. Marine Corps capabilities and standards. Mastery does indeed take time and effort, but one should not dismiss PLAMC potential — if experience is anything to go by.

Global Base Network in Commercial Guise

Matching the United States’ worldwide network of bases and military support facilities that allow global operations for a MEU is not realistic for the Chinese. But that may not be a serious impediment.

Starting long before the PRC Belt and Road Initiative was announced in 2012, the Chinese have built a worldwide network of dozens of ports and airfields it either owns, operates, or has access to — for commercial purposes. And it is on the prowl for more.

These potentially work just as well as support infrastructure for PLA operations worldwide. With little effort (and financial “grease”) these may serve directly as military bases.

The PRC may only have one military base for now — in Djibouti. But another is under construction in Cambodia, and others are rumored to be “biding their time.”


What are the Chinese Marines Capable of Doing?

The PLAMC (with support of PLAN, PLAAF) is believed able to seize any small island within the First Island Chain, or even establish coastal lodgments throughout the region. However, combat operations against any competent opponent are currently a stretch — and especially if further afield. And that will remain the case until the Chinese Navy and Air Force expand their own expeditionary capabilities — to include more surface ships, submarines, long-range bombers and transports, refuellers, and the like.

They are working on this, however, and should have something impressive within a decade or two.

But there’s a lot the Chinese Marines (and PLAMC MEU) can do short of combat.

A Chinese amphibious force making the rounds in the Indo-Pacific or elsewhere, for example, can protect Chinese civilians and Chinese-owned infrastructure. It can conduct humanitarian assistance missions after natural disasters — and gain the political benefits that come from that.

One even foresees a role for Chinese Marines afloat as peacekeepers. Suppose, for example, the pro-PRC Solomon Islands government calls in the PLA Marines to put down demonstrations in one of the provinces protesting against Chinese influence in the country.

And just conducting training or “show the flag” visits tends to build relationships and even a sense of the PLAMC as an alternative to the U.S. Marines.

Also, presence has a value of its own. Not least as the symbolic front end of national power.

The simple ability of the PLA to undertake these operations tends to have a restraining effect on potential adversaries’ willingness and ability to defend against them. It also potentially reduces the prospects of U.S. intervention on behalf of allies.

When will the PRC deploy PLAMC MEUs? They can do it within a matter of weeks if they feel like it. But, as with many things, Beijing will act when it thinks the “time is right.” That’s hard to predict, but tends to correlate with Chinese perceptions that anyone who might resist is weak, confused, or distracted — especially in Washington, DC.

Regardless, the PLA Marine Corps is developing into an effective arm of Chinese power projection.

It probably couldn’t be helped. But in what must have seemed like a good idea at the time, the U.S. Marine Commandant visited the PLA Marines in 2008 and gave a short speech encouraging the Chinese Marines to master their profession.

Grant Newsham is a retired U.S. Marine and a former diplomat and business executive who spent many years in Asia. He is a senior fellow with the Center for Security Policy.