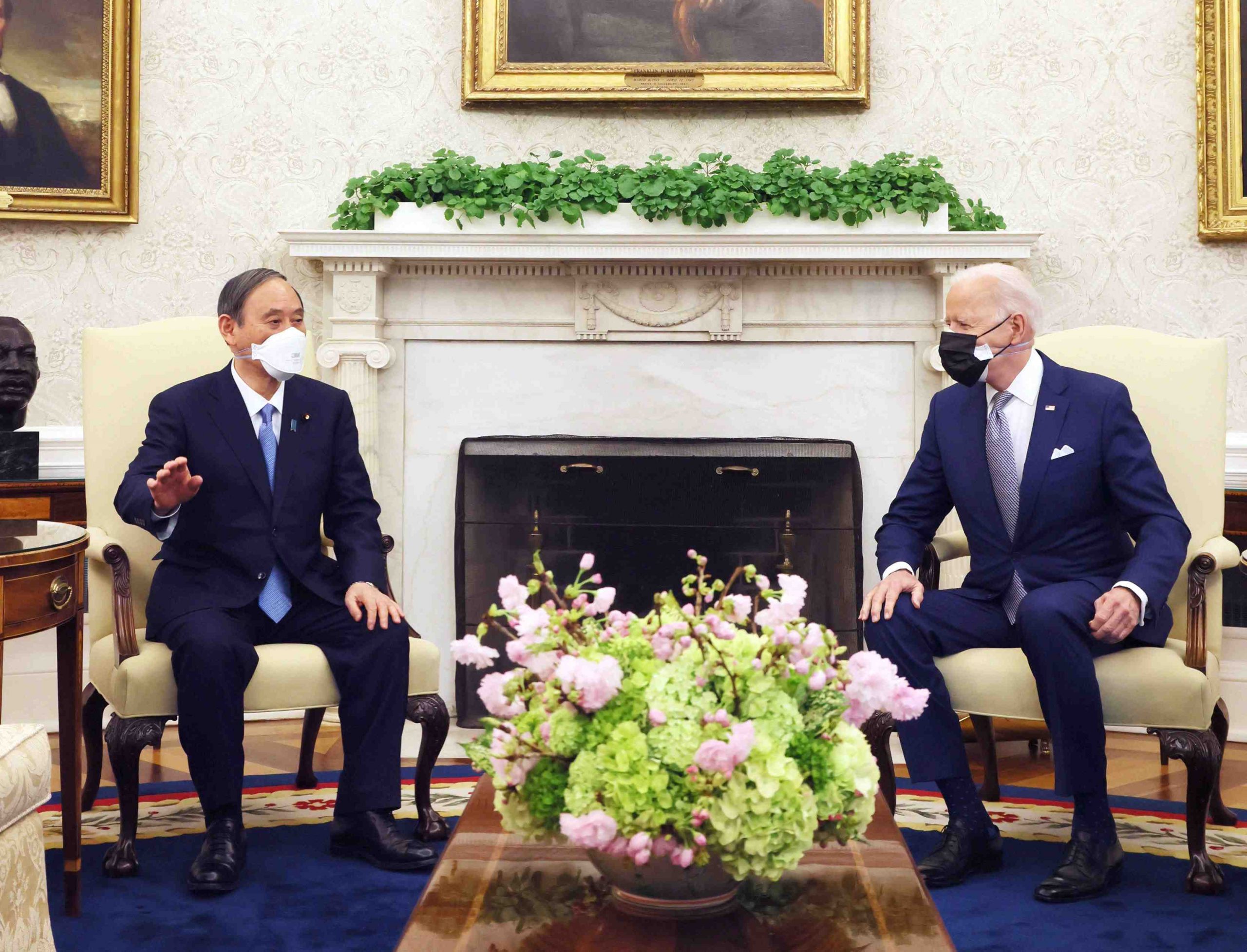 The point most frequently emphasized in the Joint Leaders’ Statement that was issued following the recent summit meeting between Prime Minister Yoshihide Suga and U.S. President Joe Biden was “strengthening of the Japan-U.S. Alliance.”

That message was reinforced by repeated references to such mutual policy goals as “deepen defense cooperation across all domains” and “enhance deterrence.” It even included this phrase: “Japan resolved to bolster its own national defense capabilities”.

The general impression given by the statement was that Prime Minister Suga had merely agreed pro forma to what the Biden Administration had asked for. The reason I say that is because the Japanese side has still not come up with any concrete policies or strategies for bolstering its own defense or deterrence capabilities.

For a normal nation state, discussion of defense or deterrence refers to military affairs. To begin with, an alliance between independent nations is essentially a pledge for mutual military assistance.

Be that as it may, since the end of World War II, in Japan discussion of the “military” and related concepts have been taboo. Can such an abnormal stance be consistent with a new era that demands strengthening of the Japan-U.S. alliance to “maintain peace and stability” in the region?

In any case, the chief subjects of concern are China and North Korea, which both readily use their military power for purposes of expansionism and intimidation.

Newsham wrote that Suga’s overriding goal was “to keep the United States on the hook to defend Japan” including the Senkaku Islands, adding that reassurance on this score would be sought repeatedly.

As Newsham wryly put it: “He wants to hear it again. Sort of like some gal asking, ‘do you love me?’ every five minutes. If she’s asking, she ain’t sure.”

Yet, at the same time, Japan does little itself to enhance its own defense posture in the vicinity of the Senkakus, Newsham notes, even as China steadily increases its presence there.

Newsham’s message might be taken as a warning that Japan cannot take for granted Washington’s pledge that it will continue to consider the Senkaku Islands as covered by Article 5 of the mutual defense treaty.

Kenneth R. Weinstein, a distinguished fellow with the Hudson Institute in Washington D.C., touched on a related point in an article first published by the Dallas Morning News and then on the think tank’s website on the eve of the summit, entitled “Japan Is Now Our Most Important Ally— Here’s Why”. In the article, Weinstein wrote:

"The Biden-Suga summit could accelerate a transformation of the bilateral relationship, in which the once-vanquished Japan emerges as a full and equal partner of the U.S. But Japan needs to do more to assume this critical role."

Weinstein emphatically noted, however, that as things now stand Japan is not playing anywhere near an equal role, when he wrote, “As a frontline nation in the strategic competition with China, Japan needs to make its territories and waters increasingly inaccessible to Chinese incursions.”

While acknowledging that Japan’s defense spending has crept up in recent years, Weinstein judged it as still inadequate to ensure effective collaborative defense with the United States. He wrote, “Japan needs to spend more (and allocate funds more effectively) to move from defense to deterrence.”

Weinstein squarely placed the blame for Japan’s defense inadequacies on its postwar constitution. He noted that after World War II, as part of its efforts to transform occupied Japan into a peaceful, prosperous democracy, the U.S. dismantled Japan’s war-fighting capabilities. At the same time, the constitution imposed on Japan at that time renounces the “threat or use of force as a means of settling international disputes.”

He also argues that the principle of limited exercise of the right of collective defense under the mutual security treaty, which became official policy under a new law enacted when Shinzo Abe was prime minister, is simply inadequate.

“Even reinterpreted, as it has been, to allow for collective self-defense, Japan’s constitution may still pose obstacles to preemption and effective joint operations,” Weinstein cautions.

Incidentally, although Weinstein might be characterized as a scholar aligned with the Republican Party, veteran Congressman Bradley Sherman (Democrat, California) who is a member of the House Foreign Affairs Committee and close to the Biden Administration, has made even more alarming comments.

He has stated, for example, that since under current circumstances Japan can use its constitution as an excuse for not aiding the United States in the event of a crisis, the U.S. should not have to defend the Senkakus.

We need to keep this fast-evolving and complicated background in mind when assessing the summit.

(Find access to the special Sankei Shimbun column in Japanese at this link.)