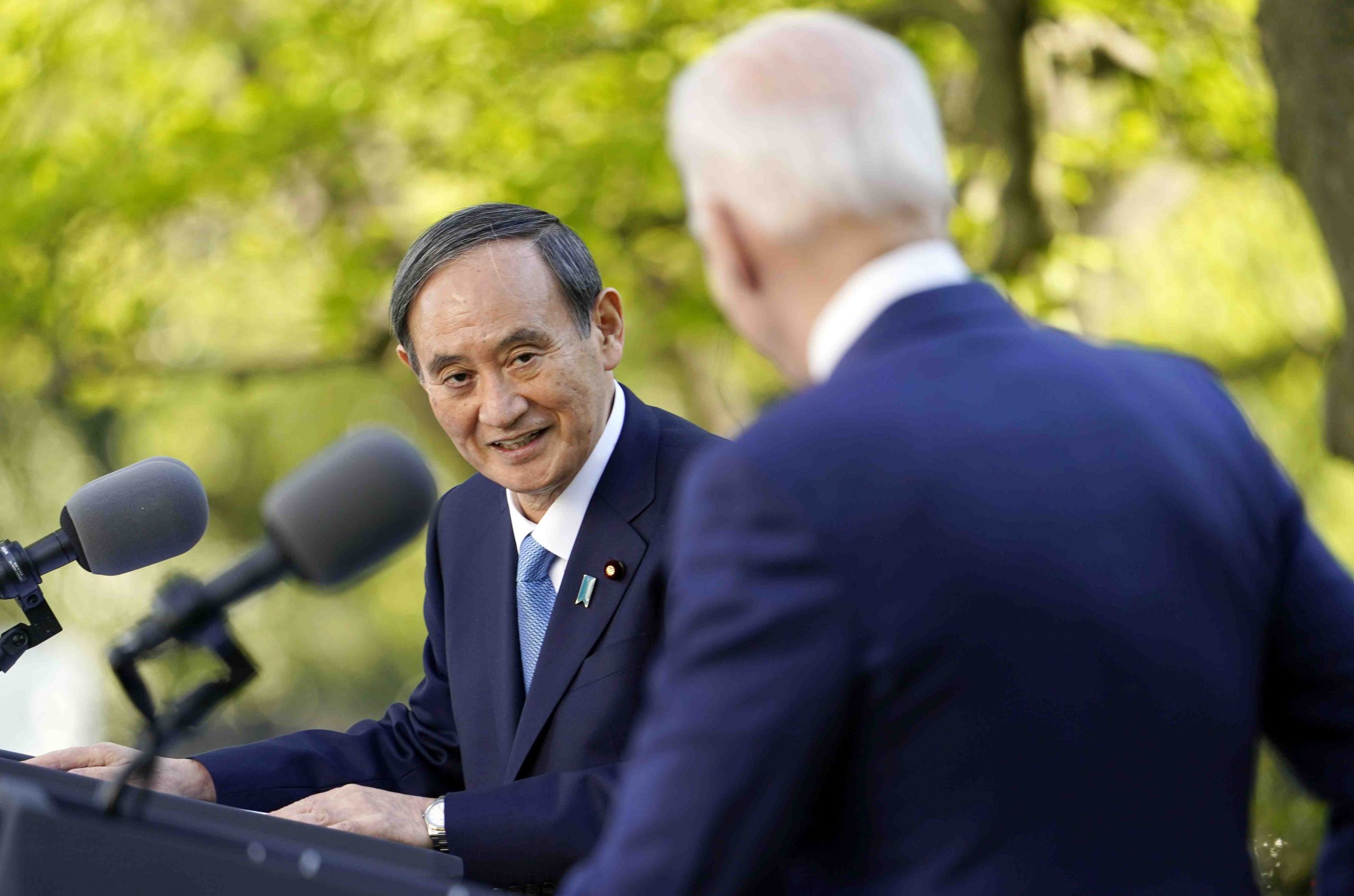 During their first meeting on the afternoon of April 16 in Washington D.C., Prime Minister Yoshihide Suga and President Joe Biden strongly affirmed the importance and solidarity of the Japan-United States alliance. This was Biden’s first face-to-face meeting with a foreign leader since he took office in January.

Suga and Biden were united in their opposition to China’s unilateral attempts to alter the status quo in the East China Sea and South China Sea by force and intimidation.

With China in mind, they also affirmed the “importance of deterrence” and vowed to further strengthen the bilateral alliance. Their agreement was very appropriate.

Especially noteworthy was the fact that the joint statement following the meeting underscored “the importance of peace and stability across the Taiwan Strait”.

This was the first time since Prime Minister Eisaku Sato met with U.S. President Richard Nixon in 1969 that the joint statement issued at a Japan-U.S. summit mentioned Taiwan. Normalization of diplomatic relations between Japan and China took place in September 1972.

During the early 1970s, Japan, the United States, and other members of the free world welcomed a China ruled by the Chinese Communist Party (CCP) into the camp opposing the Soviet Union.

Moreover, since the end of the Cold War, China has benefited enormously from free trade and the introduction of science and technology from abroad, to the extent that it has grown into the second largest economy in the world. Nevertheless, it is now disdaining international law as it seeks to expand its influence.

We have entered an age when we must again restrain China’s dangerous behavior. At the just concluded summit, Japan and the U.S. pledged to respond to the structural changes occurring in international affairs through their bilateral alliance.

One of the focal points for deterrence against China is Taiwan.

President Biden clearly reaffirmed that Article V of the U.S.-Japan Treaty of Mutual Cooperation and Security applies to the Senkaku Islands in Okinawa Prefecture. That is certainly welcome.

Yet, defense of what is Japan’s own territory is not sufficient to ensure peace and prosperity in the region. After all, a free and democratic Taiwan lies right next to Okinawa, and we must show the determination to do all we can to thwart China’s use of military force against Taiwan. There is a grave danger that a crisis that geographically starts in Taiwan will immediately spread to Japan.

The statement issued after the March meeting of the Japan-U.S. Security Consultative Committee (“2+2” Ministerial Meeting), attended by the foreign and defense ministers from both countries, also made reference to “peace and security in the Taiwan Strait.”

That elicited criticism from Beijing that “Japan seems happy to have become a strategic vassal of the United States.”

Despite the pressure from China, Suga chose to take up the Taiwan issue at the summit. Following the summit, in an online speech to the U.S. think tank the Center for Strategic and International Studies entitled “My Vision for the Japan-U.S. Alliance,” the Prime Minister said, “I do not intend to offer concessions in matters related to sovereignty or universal values, such as democracy, human rights, and rule of law.”

The things referred to in this declaration are all correct actions that will strengthen the deterrent power of the Japan-U.S. alliance.

The joint declaration issued at the summit also incorporated references to shared serious concerns about the human rights situations in the Xinjiang Uyghur Autonomous Region and Hong Kong. Then, in their joint press conference, Suga and Biden in their own words emphasized that strong checks on China were necessary.

In the joint statement, Japan indicated a willingness to do more “to further strengthen the Alliance and regional security” by bolstering its own national defense capabilities, although we had hoped to see specific measures mentioned.

Faced with possible Taiwan crisis in mind, and the prospect that the United States will lose its superiority to China in terms of missile deployment, Japan needs to beef up its defensive strength. It is also imperative that we make the decision to adopt the capacity to attack enemy bases.

The joint statement appropriately confirmed bilateral collaboration in addressing questions related to North Korea, including the abduction of Japanese citizens, and the nuclear and missile issues. President Biden reaffirmed the U.S. commitment made by former President Donald Trump to the immediate resolution of the abduction issue.

The statement also called for “new forms of 21st century cooperation,” emphasizing measures such as enhancing competitiveness and dealing with COVID-19, as well as climate change. It attached particular significance to solidarity in ensuring economic security through a competitiveness and resilience partnership. It noted how China is moving quickly to nationalize key advanced technologies and seeking hegemony through economic-military integration.

The joint statement also affirmed the need for partnering in building secure supply chains for sensitive technologies such as semiconductors, as well as deepening cooperation in research and technology for areas such as biotechnology, artificial intelligence (AI), and quantum information sciences. In addition, it emphasized the importance of relying solely on trustworthy vendors for fifth generation (5G) wireless networks.

All of the fields of technology mentioned are those where it would be highly risky to become reliant on China. Now we would like to see this concern translated into the steady implementation of concrete measures.

In the post-coronavirus world, semiconductors (which already are in short supply), rare earth substances (for which China controls the bulk of the current supply), and other such critical materials are absolutely indispensable strategic supplies, used in everything from AI and high-speed telecom networks to electric vehicles.

In the drive to establish reliable procurement networks, we should look to nations that share our democratic values, such as Taiwan, which excels in the semiconductor sector, and Australia, which mines rare earth substances.

Materializing supply chain collaboration is a priority for the Biden administration. But, on this issue, Japan should take the initiative. We need to review our strategies vis-à-vis China in the area of economic security, including in terms of export controls on strategic materials.