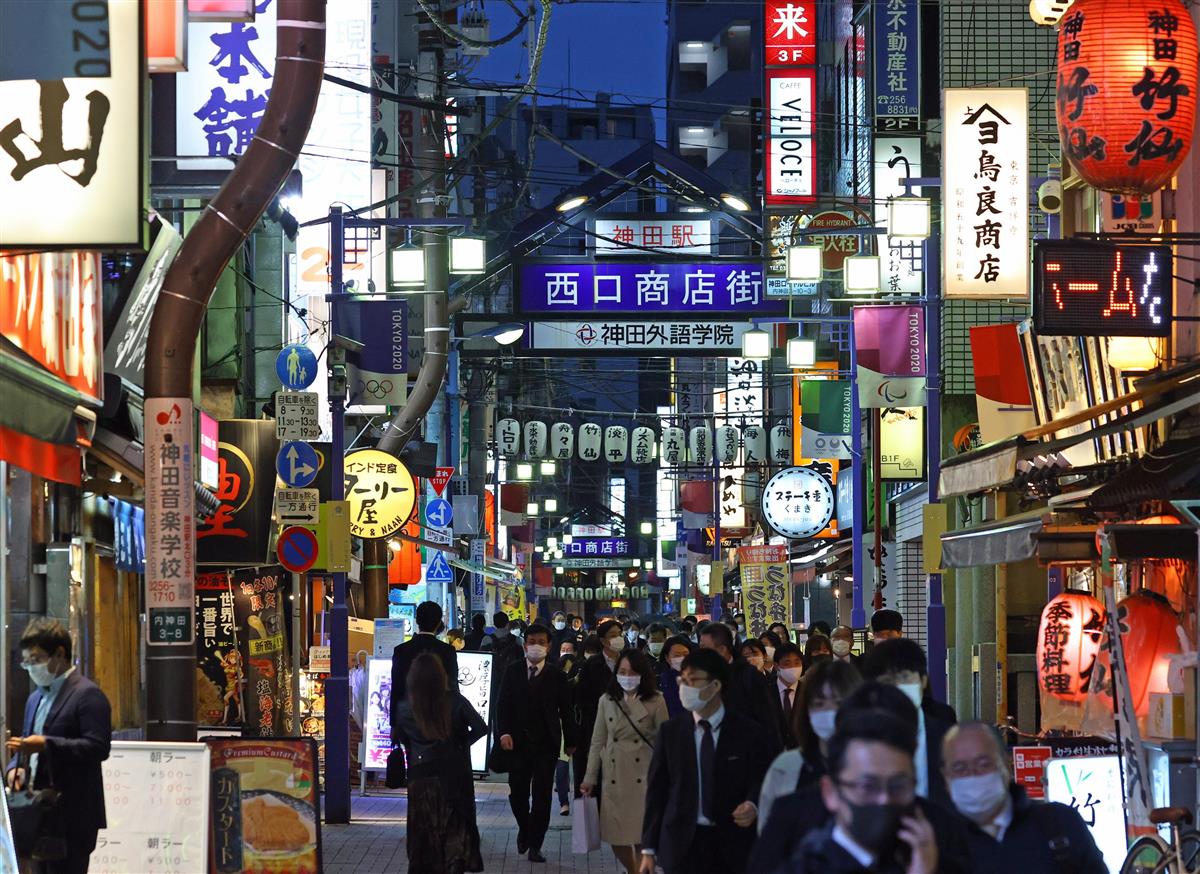 Prime Minister Yoshihide Suga is expected to call a new state of emergency within the next few days, likely beginning Friday, April 23, and lasting for approximately one month.

This follows the requests of local governments, in particular in Osaka and Kyoto and Hyogo prefectures in Western Japan, which have seen an unprecedented rise in new coronavirus infections.

On April 21, Hyogo Prefecture registered the highest number of infections yet during the pandemic, with 563 new patients in one day. Osaka hit 1,249 cases on the same day, its highest level yet and an exponential spike since dropping to about 100 cases per day from February to late March.

Earlier on April 21, the governor of Osaka, Hirofumi Yoshimura, explained that the situation was “extremely severe” and that the medical system was being taxed to the verge of collapse.

Also on April 21, the Tokyo Metropolitan Government announced that for the first time the daily number of new infections related to variants of the virus hit more than 100 patients. While far lower than Osaka at this time, the trend is causing significant concern among Tokyo officials.

The decision to request that the national government call a state of emergency is based on a series of parameters, including the daily number of new infections and the rate of occupied hospital beds.

Suga said in the evening of April 21 that the government’s final decision would be announced “by the end of the week.”

Leaders have been quick to say that this is unrelated to the Olympics, whose original opening on July 24, 2020, has already been moved to July 23, 2021, due to the pandemic.

Suga firmly declared in the National Diet that calling a state of emergency “will not impede Japan holding a safe Olympics.”

International Olympic Committee chief Thomas Bach commented that the state of emergency was unrelated to the Tokyo 2020 Olympics and Paralympics: “I understand that it puts a limit on Golden Week. It is in line with the overall government policy and has nothing to do with the Tokyo Olympics.”

Experts have pointed out that the main culprit for this unprecedented crisis is the mutated variants of the virus. Three types have been confirmed in Japan: the U.K., South Africa, and Brazil variants and a fourth one whose origin is unclear.

According to analysis by the panel of experts for the Ministry of Health, Labor and Welfare, the U.K. variant, which has the characteristic of being more contagious, has become prevalent in Hyogo and Osaka. Estimates suggest that it has come to represent up to 80% of new infections. For example, in a study looking at 20% of new patients diagnosed between April 9 and 11, 443 patients out of a total of 553 had contracted a variant of the virus.

Contagiousness is not the only problem. Another issue seems to be the seriousness of the infection. Doctor Yoshinori Yasui, who is treating COVID-19 patients at an Osaka Prefectural Hospital, pointed out in an interview with NHK that this time patients are also younger.

“There are people in their 40s, 50s, 60s who are being hospitalized with severe pneumonia. Every day is a battle to avoid the worsening of the illness as serious cases continue to rise,” he said.

Finding that the measures taken up to now are not enough to curb the rapid spread of infection, local governments are calling for new steps.

After asking the national government to call a state of emergency, Osaka Governor Yoshimura plans to ask restaurants to close altogether for the first time since the start of the pandemic. He also plans to ask entertainment-related businesses — including theaters, cinemas, and other establishments where people gather in large numbers such as department stores and theme parks — to close. The governor also wants to encourage the cancellation of large events.

“I want to stop the flow of people,” explained Yoshimura.

The state of emergency is not expected to entail a blanket closure of schools, as it did in spring 2020. Nonetheless, in Osaka in particular, students and teachers are feeling the effect of the new variants. NHK reported that, as of April 21, 29 out of the 180 Osaka schools were temporarily closed due to confirmed cases of COVID-19 among either students or staff.

In addition, the governor of Osaka is asking that schools make online learning a possibility for students who feel a sense of unease with the spread of infections.

Japan has been alternately putting the breaks and the accelerator on virus prevention measures for the past year so as to minimize the spread of infections without crippling the economy. The government called its second state of emergency in January, which was lifted in March, as many experts pointed to diminishing compliance as fatigue with the restrictions set in.

In March some cities, including Tokyo and Osaka, called a quasi-state of emergency under a new legal framework approved in January 2021. The new framework gives local governments the power to impose reduced working hours on businesses, monitor COVID-19 prevention measures in eating and drinking establishments, and impose fines on those who don’t comply.

However, recently the main problem seems to be relaxation of the mood of the general public as people in Japan grow accustomed to living with COVID-19. Governor Yoshimura himself also admitted, “The measures up to now are not sufficient to curb the spread of the virus.”

Local and national officials now seem to have pinned their hopes on stopping the movement of people around the country during Japan’s extended public holiday known as Golden Week, which goes from April 29 to May 5. One of the longest holidays in the Japanese calendar, it normally sees people traveling all over the archipelago and around the world.

As the number of patients infected with the variants rises, central and local governments are under even more pressure to send a strong message to citizens.

Emphasizing the importance of action during the holiday, Dr. Yasui from Osaka Prefectural Hospital pleaded: “The number of patients will not decrease unless people stay home during Golden Week. These [COVID] variants are highly infectious.”

Head of the Japan Medical Association, Dr. Toshio Nakagawa, noted in the afternoon of April 21: “A third state of emergency is inevitable. The measures based on self-restraint [that we have used until now] have reached their limits. For the safety and security of the people, we don't have the luxury of debating whether to call a state of emergency or not.”