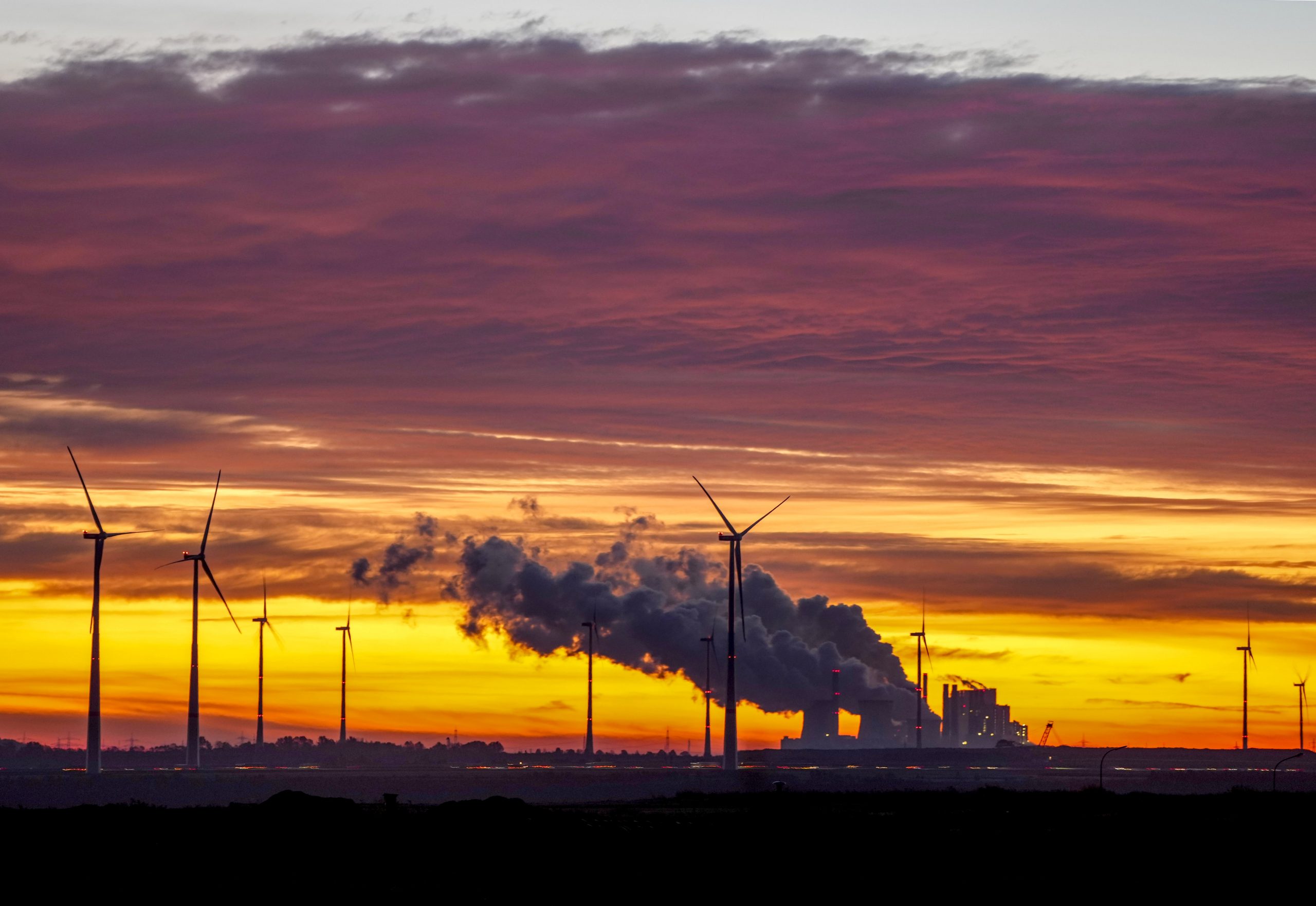 Steam comes out of the chimneys of the coal-fired power station Neurath near the Garzweiler open-cast coal mine in Luetzerath, Germany, Monday, Oct.25, 2021. (AP Photo/Michael Probst)

The United Nations Climate Change Conference of Parties, also known as COP26, ended in Glasgow on the evening of November 13.

In a debated yet historic Glasgow Climate Pact, countries agreed on several steps to tackle global warming, including measures to keep the rise of temperatures to less than 1.5 degrees Celsius compared to pre-industrial times.

What is Japan doing to contribute to these global targets?

After all, the NGO Climate Action Network awarded Japan one of its “Fossil of the Day” awards on November 2, accusing Japanese Prime Minister Fumio Kishida of having “deluded dreams” about the use of hydrogen and ammonia on the road to carbon neutrality. They argued that “these novice and costly technologies are linked to fossil fuel extraction and would leave little chance of meeting the global 1.5C degrees targets.”

Then, on November 10, Kishida talked about the country’s commitment to green energy in a press conference, pointing out that “explaining more about technologies such as ammonia and hydrogen could increase the understanding.”

In fact, it turns out that Japan is doing quite a lot in developing emerging technologies, such as hydrogen, renewable energy, AI, and more.

Some of these technologies were on offer in Glasgow. At the COP26 Japan Pavilion, Naomi Inoue, the official in charge, said, “We want to show the technologies that Japan can be proud of.”

In two parts, beginning with hydrogen technology, JAPAN Forward looks into some of the technologies coming out of Japan that could help in the aim of achieving net carbon emissions by 2050.

Japan has been a pioneer in hydrogen-related technologies.

As of 2019, Japan was one of only three countries (together with France and South Korea) to have strategies for the use of hydrogen. Now, there are more than 17 countries on that list, and 20 others have publicly announced their interest to be part of it.

“It is important to support the development of low-carbon hydrogen if governments are going to meet their climate and energy ambitions,” said Fatih Birol in a press release, executive director of the International Energy Agency (IEA), in October.

Most of the time, the basic principle is to use heat to generate hydrogen, which can then be used to create electricity. Hydrogen can then have different uses, such as storing energy in fuel cells, thanks to its high-energy properties.

The heat necessary to generate hydrogen can be derived in many ways, including renewable energy sources, which gives it the attribute of “green hydrogen,” and thereby has zero-carbon emissions.

One good example is a new green hydrogen technology developed by Panasonic.

The company has been working to create RE100 Solution, the first ever hydrogen-based factory using only renewable energy in Kusatsu City, Gunma, not too far from Kyoto.

Through a combination of solar panels, lithium batteries, and hydrogen fuel cells, the solar-derived energy can be stored through the use of hydrogen fuel cells. This allows for the factory to use the captured solar energy when most convenient, without being reliant on the weather for storage supply.

Panasonic is aiming to have the factory running in 2023, and then make plans to provide this solution to customers globally.

Yet, this isn’t just a technology for the future.

Panasonic’s hydrogen fuel cells are also the main source of energy for the area called HARUMI FLAG, the complex of buildings which hosted Olympic Village for the Tokyo 2020 Olympics and Paralympics.

The area has a hydrogen station, which supplies power to fuel cell vehicles and city buses, and has pipelines that deliver hydrogen to fuel cell generators that power common-use spaces and condominiums. The project is estimated to be Japan’s first hydrogen power grid system.

By 2024, a modern complex of buildings in Tokyo bay is set to become a residential area for 12,000 citizens to enjoy, spanning 18 hectares, with 23 condominium buildings and over 5,000 apartments.

Elsewhere, Panasonic is already experimenting with hydrogen fuel cells storing technology in factories in Yamanashi Prefecture, among others.

“This isn’t just a dream, it’s already a reality,” said the enthusiastic Kazuo Yonekawa, unit leader of the Environment Public Relations Office at Panasonic, who caught up with us at the COP26 Japan Pavilion.

Deriving heat from renewable energy with green hydrogen, however, is sometimes thought to be a process which is new, and still expensive.

Therefore, some companies are investing in easily implementable solutions with existing technologies that can help soften the blow of carbon emitting energy processes.

One company helping on that front is Mitsubishi Heavy Industries.

The heavy industry giant has created a small nozzle part which can be installed on any of its natural gas turbines already used in approximately 1,000 factories around the world, often in energy production.

Substituting this one component during routine maintenance, the turbine can be converted to a hydrogen firing technology. Factories and other gas turbine power plant owners can therefore quickly and easily decrease the amount of their CO2 output. As gas turbines are also used in aircraft and ships, among other places, it will be interesting to see how far the technology can be extended.

“Because we are only changing this part, the technology can support the quick transition to hydrogen,” said Mitsubishi’s Hideyuki Kida, communications and government relations manager in the Energy Transition and Power Management Group.

Currently, the technology allows for the turbines to operate with 70% hydrogen and 30% natural gas.

But Mitsubishi is already carrying out trials in the United States and aiming to have 100% hydrogen firing technology ready to use by 2025.

“The technology has been there for 50 years, and now is the time to use it. This is the perfect time to introduce this technology. We need to support the hydrogen production and supply chain,” explained Kida.

Hydrogen can also be derived by burning fossil fuels, which produces CO2 in the process.

Yet, one way around this is to offset emissions, at least in the short term, with CCUS technology (carbon capture, usage, and storage) in a process sometimes called “blue” hydrogen.

The IEA reported in September 2020 that, after a 30-year decline in demand, the use of CCUS technology has not reached its potential, but at the same time it is “critical in ensuring our transition to clean energy.”

CCUS in fact can be used with any kind of fossil fuel-derived energy system. In particular for Japan ー and other Asian countries ー it has potentially wide application in the transition to clean coal and natural gas.

Mitsubishi is also developing this type of carbon capturing infrastructure, which can capture over 95% of CO2 emissions.

Yoshiki Sorimachi, PMP, deputy general manager of the Decarbonization Business, also caught up with JAPAN Forward at the Japan Pavilion at COP26.

He stressed that the technology already exists, and in fact has already been put in place in 13 factories around the world.

“We think that while we figure out a transition to other renewable energies, this is a way we can help in the short term.”


What is the Hold-up?

Reading most of the article, one might understandably ask: What is the hold-up?

The answer that keeps coming up again and again is — like any new technology — the cost.

And with high cost comes the difficulties of stabilizing the supply chain.

Panasonic’s Yonekawa explained: “We want leaders to increase the demand for hydrogen. It’s a chicken-and-egg problem. But if you don’t increase demand, then the costs don’t go down. That is why it’s important to discuss this on a global scale, so it becomes a viable option for everyone. I think that it is critical in linking to the resolution of being carbon neutral by 2050.”

Mitsbushi’s Kida echoed this sentiment with regards to transitioning to hydrogen turbines, saying that it is important that people start implementing these types of solutions for the market to stabilize.

“Supply chain is key for this technology because this will consume a huge amount of hydrogen, and the hydrogen production plant needs to be a stable offtake in order to make sure that they will be paid back,” he said.

Mitsubishi’s Sorimachi argued for more funding of CCUS technology, saying that, until there was a stronger government commitment, these solutions would stay out of reach.

“Introducing these technologies is expensive. However, if, like in the U.K., there are incentives, then it’s another story,” he said.