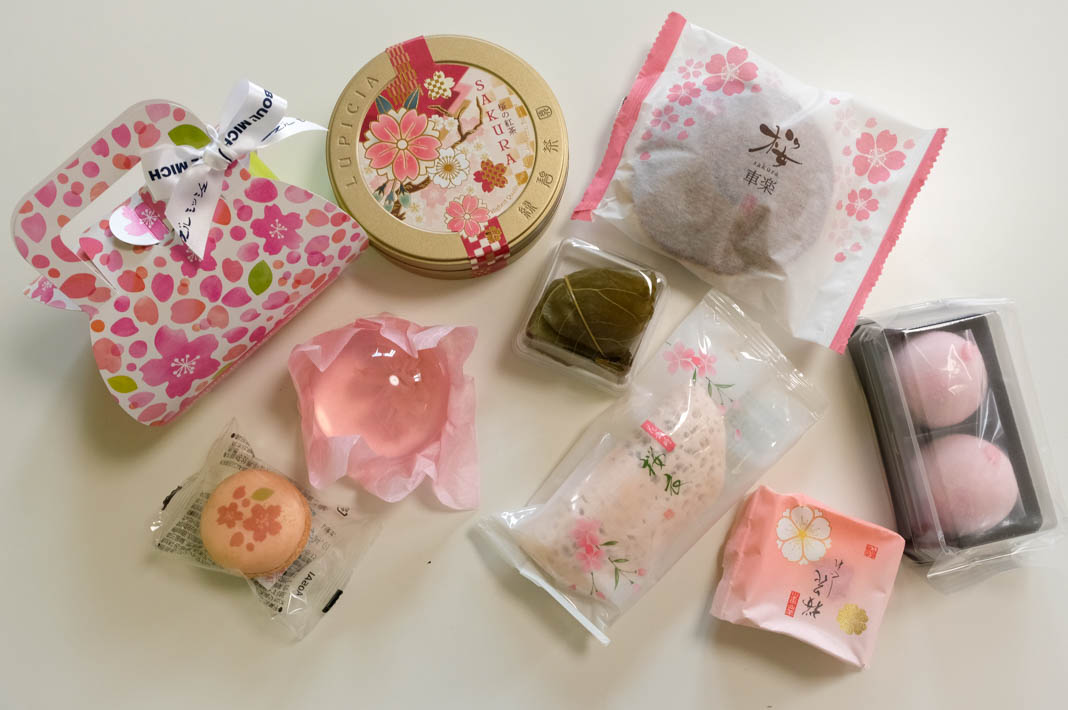 The winter has finally ended here in Japan, with spring's embrace so tangible you can almost taste it. With this new season comes warmer weather, blossoming trees, and a host of delicious delicacies to help you celebrate.

While there are a wide variety of popular vernal flavors, the must-have for the season is definitely sakura, the delicate cherry blossoms whose bloom are the epitome of spring in Japan.

Along with the rest of its cuisine, Japan has a long culinary history revolving around sweets. Most of these traditional confections are wagashi, small, sweet morsels that were meant to accompany bitter matcha tea and other beverages. During cherry blossom season, you can find these traditional Japanese sweets in sakura-flavored versions, as well as additional snacks that are only available during the spring!

A great place to browse and shop for these traditional streets is in the basement food halls of Japanese department stores. Department stores in Japan are luxurious bastions of commerce, and their basements always contain vast food halls selling a wide range of exciting food products.

This is the perfect location in which to become acquainted with various Japanese foodstuffs, and so I headed to two of Tokyo’s best, Isetan and Takashimaya in Shinjuku, to taste and try some traditional sakura sweets.

Japanese sweets use very different ingredients compared to what I, as an American, am accustomed to. One of the most common ingredients is sweetened red ー or white ー bean paste and rice flour. I was curious to see which of these traditional Japanese desserts I would enjoy, and which ones, perhaps not so much.

A common variety of wagashi is manju. Manju can have many different varieties, but it is usually a small cake made with flour and a smooth paste of azuki red beans inside. During sakura season, this paste is made with white beans or tinted pink and flavored with sakura.

I tried two different sakura manju, a pink one adorned with a decoration like a sakura petal and sparkling sugar, and a white one with a pickled sakura flower on top. I loved both of these. The texture is soft and delicate, and the sweet flavor is delicious. The pickled sakura flower added a surprising zinginess that balanced the sweetness of the manju really well. These are especially nice when they are consumed alongside tea.

One category of confectionary found only during the sakura season is sakura mochi. Mochi is a soft, slightly squishy rice cake made with pounded rice flour. And there are a few spring varieties of this sweet as well.

Chomeji, a Tokyo incarnation, consists of a thin, baked piece of dough that is then wrapped around red bean paste and a pickled cherry tree leaf. The Kyoto rival to this is domyoji, a chewy ball of mochi that contains some whole pieces of rice. This mochi ball is filled with red bean paste, and also wrapped in a pickled leaf. These two I found to be more of an acquired taste. The mochi is chewy, the beans are sweet, and the pickled leaf has a really sharp flavor. I’d never tasted anything quite like it before!

A sweet that is relatively modern by Japanese standards that has become a favorite is dorayaki. Traditionally, dorayaki is made with two pieces of castella, a soft cake that resembles a pancake, with red bean paste or sometimes cream inside the layers. Castella was introduced to Japan by the Portuguese in the 1600s, and dorayaki was created later on in the early 1900s. In the Takashimaya basement food hall, I found a sakura dorayaki with sakura and red bean paste inside. I thought the combination of fluffy castella cake with sweet filling was quite delicious, and a bit more hearty than some of the daintier snacks.

One treat that surprised me was a sakura jelly that I stumbled upon in my food hall adventure. Gelatin desserts are a classic in Japan, but most that I’d tried were more modern fruit jellies favored by kids. This was sold in a big, round plastic container, and the pale pink jelly with a whole, open sakura flower inside caught my eye for being one of the prettiest sweets I’d seen.

The flavor was delicate, sweet and lightly fruity, and while I found the idea of eating a cherry blossom a bit strange, it was very nice.

In addition to the typical Japanese-style treats, you can find quite a few Western snacks with a sakura spin during the season.

I quite enjoyed both the sakura langue de chat and macaron from Boul’ Miche, a classic French confectionary from Japan. The langue de chat, or “cat’s tongue” cookie, consists of two crisp, buttery sakura-flavored cookies with a thin layer of cream sandwiched between them.

The flavor and consistency of the cookie is light and delicate, as was the delicious macaron, decorated with a gorgeous cherry blossom motif. The macaron comes in vanilla or strawberry, and I was pleased with the strong fruity flavor of the strawberry.

As the winter draws to a close, there is much to look forward to with the spring here in Japan. Celebrate the season in classic style with these traditional sakura treats.