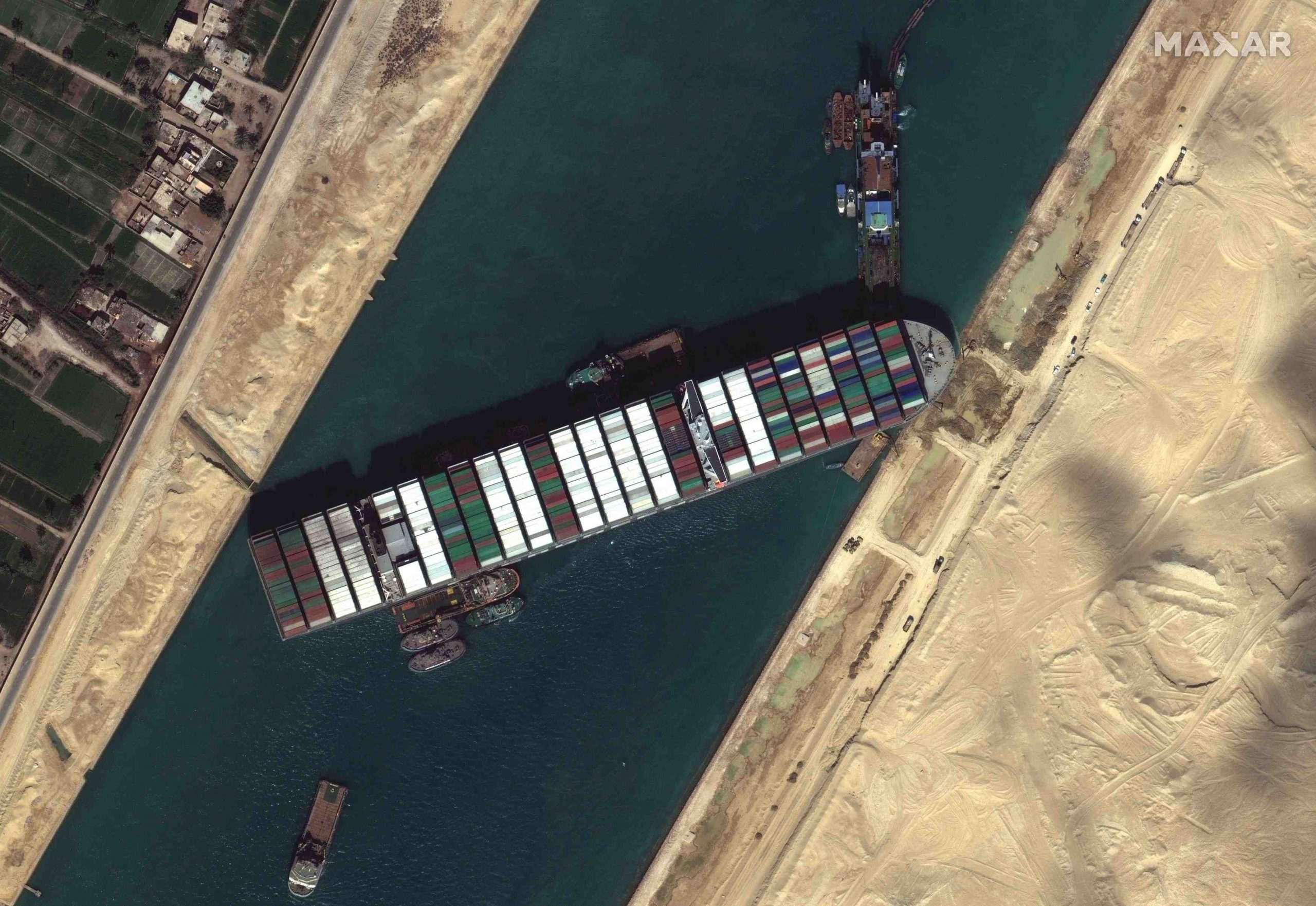 This photograph shows how the gigantic container ship Ever Given, blown diagonally and stuck in the mud, completely blocks the Suez Canal.

A giant container ship named Ever Given, which had blocked Egypt’s Suez Canal since high winds pushed it aground on Tuesday, March 23, local time, has been partially floated as of Monday, March 29.

The incident had stalled the flow of all shipping, including energy products such as crude oil and LNG, through the vital waterway which connects Europe and Asia.

While the ship is now free of the mud that held it diagonally across the canal, significant economic damage from the blockade has nevertheless been done, and the value of the damage could be huge. According to Lloyd’s List, a shipping data and news agency, the losses suffered as a result of the accident amounted to an estimated $400 million USD per hour in trade, based on the approximate price of goods that are moved via the Suez Canal per-day.

One of the insurance parties in the shipping incident spoke to The Sankei Shimbun and JAPAN Forward, saying: "The Suez Canal Authority will bring the case before the court, maybe Egypt's court, in a case against the Japanese ship owner seeking damages for their lost income and damage to the banks of the canal."

Background on the Incident

The Suez Canal is one of the world’s busiest commercial waterways and as such, the global economy cannot avoid feeling the effects. Among them is the potential for a runup of crude oil prices, which could threaten to impact the Japanese automobile industry.

The vessel blockade revealed the significance of the problem of having supply chains dependent on distant sources and narrow transportation options, including energy procurement.

The Ever Given is owned by Japanese ship leasing enterprise, Shoei Kisen Kaisha, and operated by the Taiwanese container logistics company, Evergreen Marine.

“If the blockade happens to last longer, there is the potential for an impact on international economic activities” said Hiroshi Kajiyama, the Minister for Economy, Trade and Industry before the ship was partially floated, signifying his sense of vigilance.

The Suez Canal is a strategic international waterway through which about 10% of the world’s maritime transport flows. Minister Kajiyama suggested the ministry aims to continue information gathering and analysis while they cooperate with the local Japanese Embassy and concerned enterprises.

A noteworthy ominous repercussion is energy related price hikes. “There is a potential for a negative effect on the world’s economy” said Executive Economist of Nomura Research Institute, Mr. Takahide Kiuchi.

Moreover, if gasoline prices run up in Japan, which is dependent on the import of crude oil through shipping, household finances also could be damaged.

Looking at the experience of the United States in past slowdowns, auto sales were hit from gasoline price increases in the aftermath of crude oil price hikes. “There is an extremely close link between gasoline prices and auto sales,” said Kiuchi.

In the case of auto sales slowdowns in the U.S., there is a concern that negative effects from the Suez Canal incident could hit various industries in Japan, for example, with a possible downturn in orders for car components exported from Japan to the U.S.

The blockade has also exposed the risks in alternative energy procurement. One of the likely alternative elements is the power of wind energy. But, at the same time, the Middle East region has much risk in terms of military activity. In the early part of this March, the Saudi Aramco facility near Riyadh was hit by a missile attack and explosion.

Kiuchi emphasized the need for alternative sources, saying, “In order to minimize the damage to the Japanese economy even from stalled transportation such as this time, it is important [for Japan] to accelerate discussions about increasing the ratio of alternative energy decarbonization.”

(Read related articles in Japanese at this and this link.)