China Glorifies Xi Jinping as He Rewrites the History of Communism 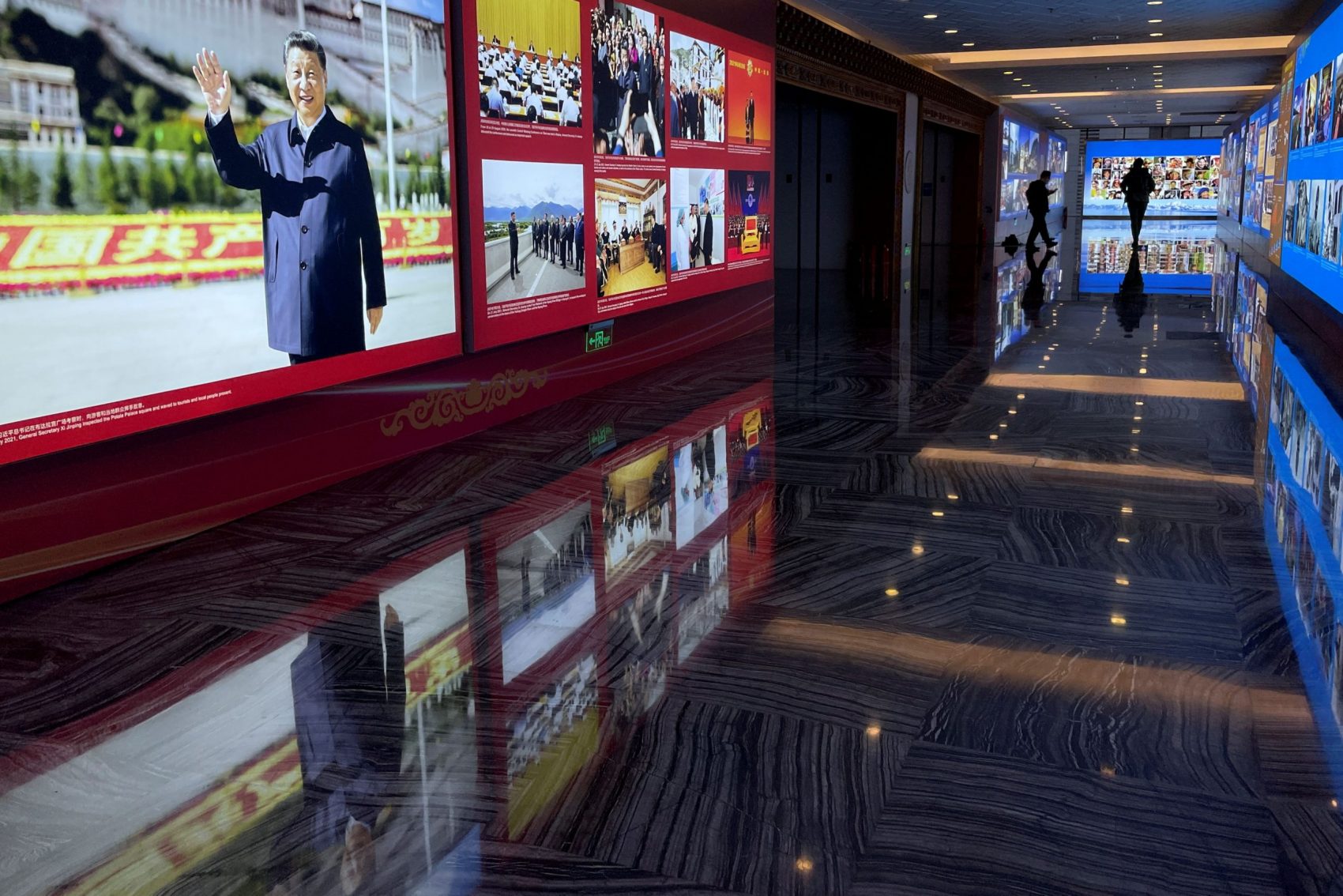 Images of Chinese President Xi Jinping are seen on an exhibition about Tibet Autonomous Region, while people walk in a hall at the foreign ministry building in Beijing, China November 10, 2021. Picture taken November 10, 2021. REUTERS/Carlos Garcia Rawlins

Loyal members of the Chinese Communist Party were summoned to Beijing this week, ostensibly for a discussion of history.

A document was placed before them which tells the nation`s story over the past hundred years or so.

It is a revisionist interpretation of China’s recent past, which whitewashes the horrors of the Cultural Revolution from 1966 to 1976, during which tens of thousands of people who were regarded as “class traitors” were brutalized or killed.

This new version of history suggests the Party is virtually blameless for the chaos released under Chairman Mao. Rana Mitter, Professor of Chinese History at Oxford University says: “A previous resolution in 1981 took some responsibility for the Party’s role in the Cultural Revolution. We don’t yet know what the new one says in detail, but it may well seek to downplay that period.”

It also ignores the deaths of pro-democracy campaigners at the hands of the People’s Liberation Army in Tiananmen Square in 1989, and implies that the autonomy of Taiwan is a temporary aberration which should be resolved when the self-governing island is reunited with the People’s Republic of China.

The document has a purpose: it will help ensure Xi Jinping will lead the Party for many years to come.

The title of the report is revealing. It is called “The Resolution of the Central Committee of the Chinese Communist Party on the Major Achievements and Historical Experiences of the Party’s Hundred-Year Struggle.” (中共中央关于党的百年奋斗重大成就和历史经验的决议).

It is designed to leave readers with the impression that the great achievement of Xi Jinping is enabling China to grow strong, building on the glorious legacy of Mao Zedong and Deng Xiaoping, who unified and enriched the nation.

Professor Rana Mitter says: “Xi Jinping was given the title ‘core leader’ at an earlier stage, clearly marking him out as a leader more central to the party’s development over time than his immediate predecessors. The new document will likely cement Xi’s role as a leader who fulfils the next stage of the party’s historical development.”

In theory, the delegates at the Beijing meeting were invited to examine and pass comments on the content of the historical resolution. In reality, they were told to approve the words agreed by the Communist Party’s Politburo. The South China Morning Post says, “these resolutions are chiefly drafted by China’s leader.”

According to the official People’s Daily, Communist Party members were assured that the resolution is “factual, shows respect for history, is thematically clear and comprehensive in its summary.”

The timing of this autumn plenum is important because it sets the tone for a crucial meeting of the Chinese Communist Party in late 2022, at which Xi Jinping`s right to continue as China’s leader will be decided.

By convention, he should be preparing to step aside after ten years at the helm, although Mao Zedong was the leader of the Chinese Communist Party from 1935 until his death in 1976.

Rana Mitter from Oxford University says: “For much of the reform era, the norm was that no general secretary of the party would stay in office for more than a decade. However, Xi is portrayed as a leader who has a longer-term role to cement China as a global leader.”

In recent years, Xi Jinping has moved to suppress his political rivals and has consolidated power within the Zhongnanhai leadership compound in the capital. China’s top legislature removed the two-term limit for the presidency in 2018.

Xi may therefore use support for the historical resolution at this year’s meeting to claim a mandate to continue his rule into a third term after next year. He will then be set to rule China for the rest of his life.

According to this revised version of history, one of the greatest achievements of the Communist Party is that it has helped China to once again stand proud after a so-called “century of humiliation” by foreign powers.

The last “humiliation” in this era was the invasion of parts of China, including Manchuria, by the Kwantung Army of the Empire of Japan in 1931.

Historians have often argued over the best way to record and explain what happened in that period. But from the perspective of the Chinese Communist Party, the official version needs to give the impression it was a revolutionary struggle against imperialist oppression.

“Chinese television has had many shows that have used the Sino-Japanese war as backdrop. In 2020, the series Autumn Cicada 秋 蝉 (Qiuchan) was a big hit on Chinese TV, showing the exploits of fictional CCP agents in Japanese-occupied Hong Kong,” observes Professor Mitter.

The fixation on war distracts from the many ways the Sino-Japanese relationship has improved over the decades. Japanese investment was a major spur to China’s rapid economic growth, and an exchange of business expertise between the countries has helped China build a sophisticated manufacturing base with global customers.

Yet as the Chinese Communist Party strives for more control over the business sector, it is pushing away outside support. Many international executives are leaving the country, according to the Financial Times. The imposition of the new security laws in Hong Kong have also hit that city’s reputation as a center for trade.

The Chinese media often portrays its growing prowess in tech and artificial intelligence as a credit to the Communist Party leadership.

Yet, as a personality cult builds around the leader, the fear among business leaders is that China is now sliding back towards a Maoist-style dictatorship, marked by paranoia and isolation.

Professor Rana Mitter is the Director of the China Center, University of Oxford and the prize winning author of several books including: China’s War with Japan, 1937-1945: The Struggle for Survival (Cambridge University Press, 2014), US title: Forgotten Ally. He is a specialist in the study of the emergence of nationalism in modern China, both in the early twentieth century and in the present era. Professor Mitter believes that to help us understand the new China, we must look at its past.

Duncan Bartlett is a regular contributor to Japan Forward and is a Research Associate at SOAS China Institute and Editor of Asian Affairs magazine. He is currently teaching diplomacy and international relations on the Economist Executive Education course, ‘ANew Global Order.`