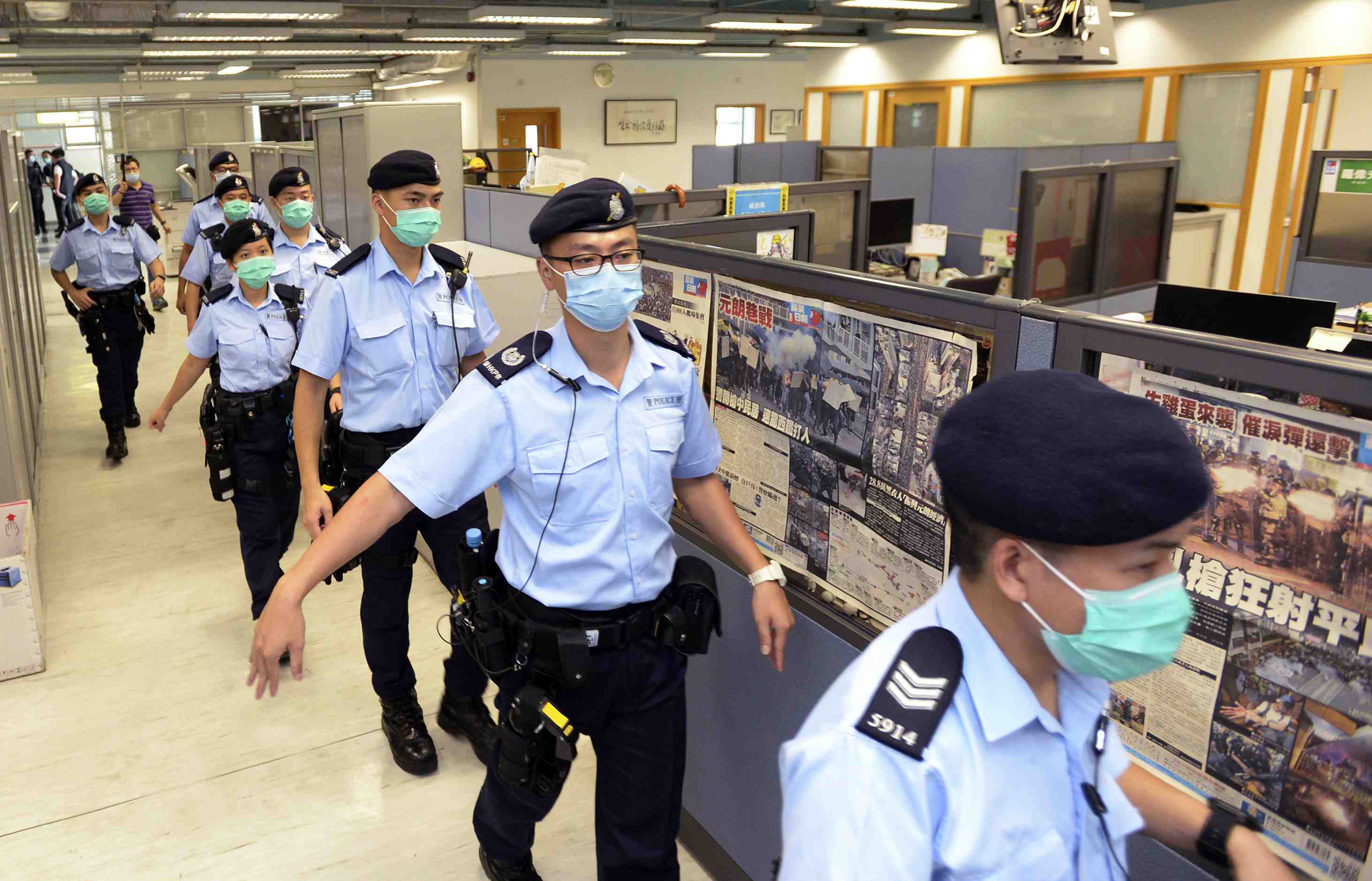 Hong Kong police inside the headquarters of Apple Daily newspaper in August 2020, when they arrested its founder, Jimmy Lai Chee-ying. On June 23 the police forced the Apple Daily to shut down.

The journalists at the Apple Daily newspaper in Hong Kong remained defiant until the very end.

“Some colleagues are not ready to let go, holding on to their last shred of hope,” said one of the writers, Louise Wong Lai-Sheung.

However, on Wednesday, the team were forced to accept that a massive show of force by the authorities representing the Chinese Communist Party had destroyed their operation.

“Yes, it’s the finishing line,” Ms Wong said in a message posted online. “I had to tell my editorial team bluntly: ‘Stop fantasising!’” she wrote.

The closure of the newspaper, which has been an important voice of dissent in Hong Kong for more than two decades, triggered a wave of anger internationally.

A European Union spokesperson said: “The closure of Apple Daily’s Hong Kong operations clearly shows how the National Security Law imposed by Beijing is being used to stifle freedom of the press and the free expression of opinions.

“Its closing seriously undermines media freedom and pluralism, which are essential for any open and free society. The erosion of press freedom is also counter to Hong Kong’s aspirations as an international business hub.”

The paper’s lead editorial writer Yeung Ching-kee, 55, was picked up from his home by police just after daybreak on Wednesday. According to the South China Morning Post, he had penned about 800 columns and commentaries since 2016, with 331 of those coming since 2019. His most recent was published on Tuesday.

“The forced closure of Apple Daily is the blackest day for media freedom in Hong Kong’s recent history. The paper has been effectively banned by the government for publishing articles that criticized it and for reporting on international discussions about Hong Kong. This is an unacceptable attack on freedom of expression,” said Amnesty’s Asia-Pacific Regional Director Yamini Mishra.

“The arrests of Apple Daily staff, seizing of journalistic materials and freezing of its assets will send a shiver down the spine of all media outlets operating in Hong Kong. It is also deeply alarming for the readers whose media consumption is now effectively being curbed by the authorities – just as it is for people in mainland China.

“The fact that the authorities are using the national security law to enable this crackdown highlights the deeply repressive nature of the legislation,” added Ms Mishra.

One of the reasons the authorities moved against Apple Daily is because it has been calling for foreign sanctions against Hong Kong and mainland China, as a way of fighting back against the erosion of democracy and autonomy.

Several executives, including senior editor Ryan Law Wai-kwong and publisher Cheung Kim-hung, have been charged with “conspiring to collude with foreign forces” and remanded in custody. The paper’s founder Jimmy Lai Chee-ying is also in jail, and the paper’s assets were frozen during the police operation.

Professor Steve Tsang, Director of the SOAS China Institute, University of London, said: “When the authorities sent a contingent of 500 police officers to arrest a few non-violent people working in a newspaper, it’s because they want you to send a clear message that resistance is futile. They want to show that they could take Apple Daily down and give the rest of the free media a fright.”

Another ominous example of the way the new security laws are being used in China comes with the start of a trial of a young pro-democracy campaigner, Tong Ying-kit.

During a street protest, he is alleged to have driven his motorbike into police lines while flying a flag emblazoned, “Liberate Hong Kong, revolution of our times.”

Mr Tong, 24, will be tried on charges of “inciting separatism and terrorism.” Hong Kong’s Court of Appeal says he is not entitled to a trial by jury, which is the traditional way cases are heard in Hong Kong – although not in mainland China.

Professor Tsang from SOAS says: “It is unusual to accuse somebody of attempting terrorism for riding recklessly on a motorbike. The significance here is that this is the very first case to go to trial under the new National Security Laws and the authorities want to send a message in a clear and unmistakable way to the rest of the campaigners with regards to protests against the new political system: ‘Don’t do it. Don’t even think about it.’”

Duncan Bartlett is a regular contributor to JAPAN Forward. He hosts the weekly podcast China In Context in association with the SOAS China Institute, University of London. Find his articles about Japan and East Asia on JAPAN Forward, at this link.