President of South Korea Moon Jae-in visited  the disputed island of Takeshima  on July, 2016 when he was an opposition leader. Takeshima is an inherent part of the territory of Japan, but it has been illegally occupied by South Korea.

This article—the first of 4 parts—has been updated from the original version, which appeared in the March 2017 issue of Seiron Magazine.

There are many, including myself, who felt a sense of relief at the Abe administration’s resolute stance in dealing with the comfort women issue. However, my relief is tempered by the dangers which are in the offing for East Asia. This is because the history wars are just one front in a much wider diplomatic and military offensive.

My initial reaction to the comfort woman agreement signed by the foreign ministries of Japan and South Korea on December 28, 2015, was that Japan and the United States were entirely underestimating South Korea’s malicious grudge against Japan.

The Democratic Obama administration was afraid that Korea’s anti-Japanese sentiment would bring down the Japan-US-South Korean alliance. The Obama team seems to have thought that, if Japan would yield on the comfort women issue and make an effort to improve South Korea-Japan relations, then the overall relationship between Japan and South Korea would also improve.

It was perhaps under the influence of this belief that the Abe administration gave ground on the problem of the comfort women. In my view, however, the Obama administration had the wrong understanding of the situation.

Paradoxically, the Japan-South Korea relationship was on solid ground. This was because the Abe administration hammered out evenhanded policies on issues of historical awareness while South Korea under the Park Geun-hye administration mounted a backlash against these policies.

By criticizing the Abe administration on the issue of historical awareness, the Park administration was able to form an alliance with domestic South Korean leftists and anti-Japan forces. This resulted in the ongoing efforts to preserve the Japan-South Korea-US security guarantee.

But then Japan and South Korea entered into the government-level agreement on historical awareness at the end of 2015. When this happened, the Park administration was defenestrated headlong from the tower of Japanese hatred in South Korea. Park and her allies were branded a government of traitors who cut a deal with Abe. South Korean anti-Japanese public opinion then pressed for the downfall of the Park regime.

These developments led to the debut of an administration further to the left than Park’s—an administration of extreme leftists with sympathies for North Korea. But even with the election of Moon Jae-in, income inequality in South Korea is worsening under American economic control, with the rich getting richer and the poor getting poorer. This translates into increasing anti-Americanism in South Korea.

Thus, there is now the danger that South Korea will leave the South Korea-Japan-US alliance network, which has heretofore been maintained by only the narrowest of margins. The Obama administration handled the crises in Syria and the Ukraine with great incompetence. It is now clear that the political situation in East Asia will be in ruins too if our region also follows the Obama doctrine.

It is too late to point this out now, but the Abe administration should have explained the stakes to the Obama team. He should have shown them how the comfort women controversy was the glue holding the Japan-South Korea-US alliance together. The Abe team should have made clear that if any South Korean government were ever to enter into an agreement with Japan over issues of historical awareness, then that would be the end of that government.

In 2015, there were those who argued that the Park administration would find itself in a difficult position if South Koreans failed to abide by the comfort woman accord signed in December of that year. Sure enough, anti-Japan sentiments found voice in the South Korean National Assembly, accusing Park Geun-hye of being a traitorous sellout who cut a deal with Abe.

Park yielded to this clamor and refused to take down the comfort woman statue which had been erected in front of the Japanese embassy in Seoul. Not only was the Seoul statue left in place, another statue was set up, this time in front of the Japanese consulate in Pusan.   At a press conference held last January 6, Japan’s Chief Cabinet Secretary Yoshihide Suga called the comfort woman statues “extremely regrettable.” He said that their placement infringed upon the dignity of consular offices, in violation of the Vienna Convention regulating diplomatic relationships.

Secretary Suga further highlighted four measures to be carried out which would clearly express the position of the Japanese government:

Japan told the Obama administration in advance that it would be taking these steps, and also made arrangements to get the international community on its side. The resolution that the Abe administration showed on this occasion was truly inspiring, and completely unlike the anemic responses we have come to expect from Japanese prime ministers.

Abe understood that the South Koreans had no intention of honoring their national promises and sought out the support of the Obama administration in dealing with the problem. In the history wars fought with the Park Geun-hye administration, it is the Abe administration that has kept on winning.

There was never any possibility other than that a new administration would emerge in South Korea which was extreme in its anti-Americanism and intimacy with China. The viable candidates for the election following Park’s dramatic downfall were all even further to the left, even more anti-Japan, and even more anti-American than Park’s regime was.

One of the candidates, for example, was Lee Jae-myung, the mayor of Seongnam and a member of the Minjoo Party (Democratic Party of Korea). On December 27, 2016, Lee held a press conference mainly for the benefit of foreign journalists at which he said that Japan was “an aggressor nation which invaded and occupied [the Korean peninsula] by force of arms.” Lee further indicated his belief that South Korea should withdraw from the comfort woman accord, as well as from the comprehensive military intelligence preservation and sharing agreement which the governments of Japan and South Korea signed in November of 2016. 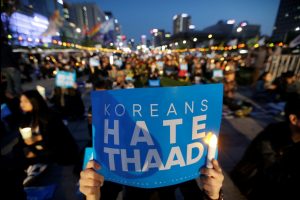 But the victor, of course, was Minjoo Party candidate Moon Jae-in, who foregrounded the following policies during his campaign:

South Korea has already moved to postpone the deployment of the THAAD missile system. An eventual cancellation will deal a body blow to the US-South Korea alliance. Park Geun-hye’s anti-Japan administration is gone, but what has taken its place is an administration holding even more extremist anti-Japanese and anti-American views.

This view has merit, of course, but the fuller fact is that if it is indeed already too late to stop the transformation of South Korea into an anti-Japanese and anti-American country, and if the US-Japan-South Korea alliance has no future because of this, then South Korea will become not just alienated from Japan but an outright enemy country. In this case, the defensive line will run right between Japan and South Korea through the Tsushima Strait.

Kick Out US Bases from Okinawa and Jeju, and China Will Build their Own