Kick Out US Bases from Okinawa and Jeju, and China Will Build their Own

The protesters of US base in Okinawa

This article—the 2nd of a 4-part series—has been updated from its original version in the March 2017 issue of Seiron Magazine.

If South Korea becomes an enemy nation, then there is a strong possibility that the Chinese military will build bases in South Korea. The primary candidate for such a base would be Jeju Island, which is very near the Tsushima Strait. This seems even more likely when one considers that many South Koreans are involved in the fight against the United States military bases on Okinawa.

I have been to Okinawa more than a dozen times and have carried out investigations on-site. Surprisingly, it is not generally known that the South Korean activists who are fighting against the US bases on Okinawa are the same ones escalating the fight against the construction of South Korean naval bases on Jeju Island.

On May 14, 2012, an event titled “Korean Style and Native Okinawan Style: 2012 Okinawa Convention of the International Coalition to Get US Military Bases out of Asia” was held at the civic hall in Ginowan, a city which borders the US military base at Futenma. The event was sponsored mainly by an organization going by the name of “People’s Coalition of Okinawans and Koreans.”

In actuality, though, the main sponsor seems to have been the New Left group “Communists Alliance (Unification Committee).” The New Left is generally friendly with the Chinese Communist Party, and they tend to tailor their activism to fit the global strategies of the CCP.

Opposed to the strengthening of military cooperation among Japan, the US, and South Korea, South Korean activists have been working from within the Okinawa Convention of the International Coalition to Get US military Bases out of Asia. They have been making announcements against the construction of South Korean naval bases on Jeju Island.

Replacing the US with China

The Jeju Island naval base is about to be completed. But since the newly installed administration in South Korea is anti-Japanese and anti-American, it is very likely that the Jeju Island base would be opened up for use by the Chinese navy.

Indeed, the Chinese side is already engaged in discussions with the South Korean government about the possibility of Chinese ships calling at South Korean naval ports.

On January 10, two Jiangkai II-class Chinese naval frigates, along with one supply ship, sailed south through the Sea of Japan, passing through the Tsushima Strait off the coast of Nagasaki Prefecture and heading towards the East China Sea.  The Chinese military is undoubtedly stepping up its activities, ranging now from the Ryukyus—including the Senkaku Islands—all the way up to the Tsushima Strait. 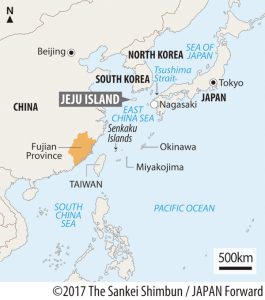 “Preparing for the worst”

On January 4 this year, CNN ran an article headlined “Preparing for the worst—how to escape from Kim Jong-un.” This article reported that, for the first time in seven years, US military families in South Korea had started training for evacuation from South Korea to Okinawa.

According to sources familiar with the US military in Japan, the US military has plans for the immediate overseas evacuation of military families not only in the event of a war, but also out of concerns for the families’ safety in case of terrorist attacks using biological, chemical, or conventional weapons.  The plans are very detailed, with instructions already in place as to who will board which cargo plane.

US military families have also been provided with special package tags for luggage left behind. If it becomes necessary to evacuate, then each family is to rush to the airfield with only the clothes on their backs, boarding a plane and heading overseas away from the emergency area. In such an eventuality, each family is to be permitted one trunk for their belongings, affixed to which will be the package tag distributed by the US military.

Information on where the trunk is to be left is provided to headquarters along with a blueprint showing the layout of the house. After the families have been evacuated, the US military would then go from house to house, collecting the trunks and eventually sending them along to the evacuation site.

According to CNN, the current round of evacuation training by the US military in South Korea was carried out in anticipation of a possible attack by North Korea.

However, the greatest danger facing the US military is that of the anti-American administration that has just come to power in South Korea.


The Trojan Horse of ‘Ryukyuan Independence’

In December of 2016, Japan’s Public Security Intelligence Agency released the 2017 edition of “Domestic and foreign affairs: reflections and prospects.” This report pointed out that Chinese universities and think tanks were playing a leading role in promoting academic exchanges and deepening ties with groups and organizations in Okinawa promoting “Ryukyuan independence.”

According to the report, the ulterior motive of these exchanges is to formulate China-favorable public opinion in base-heavy Okinawa, thus strategically fomenting divisions inside of Japan. The report advises that careful attention be paid to ongoing Chinese activities on Okinawa.

In my view, this report is too little, too late. The real situation is much graver than the report indicates.

Since the end of World War II, the Chinese Communist Party has consistently opposed the existence of US bases on Okinawa. Not only among private-sector groups, but at the governmental level as well, the CCP government has been coordinating efforts with Okinawa Prefecture.

This collaboration began in earnest in November of 1990, when University of the Ryukyus emeritus professor Masahide Ota—who passed away just yesterday at the age of 92 —was elected prefectural governor of Okinawa.   Governor Ota stoked the flames of the fight against the US bases while initiating cooperative efforts with the Fujian provincial government of the PRC. In 1994, Ota began holding a yearly summit between Okinawa and Fujian. In May of 1996, Okinawa put in place the master cosmopolitan city formation plan.

Lieutenant-Governor Masanori Yoshimoto explained the intention behind the plan: “In the 1990s, Gov. Ota’s vision for the 21st century was to strengthen exchanges with China and with Fujian Province in particular, and also with Taiwan, South Korea, and North Korea. This vision was the heart of the master cosmopolitan city formation plan.”

Under this policy, public cooperation among China, North Korea, and South Korea officially got underway. In 1998, the nationality clause prohibiting foreigners from taking government posts was stricken from employment exams. When a more conservative prefectural government was elected, these developments were stopped.

However, the repercussions of the leftist policies of the 1990s are still very much being felt.