Comfort Women Issue: Why Do the Japanese Keep Apologizing?

Believe it or not, American Southerners find some commonalties with Japanese culture. This is important.

I understand Southern culture. Much of my family was from North Florida, South Georgia, and Oklahoma. We would swim in the creek in Baxley, Georgia, and my uncle got me out picking tobacco on his Georgia farm. Thank heavens I did not grow up to be a tobacco picker. If you want a kid to study harder, make him pick tobacco.

My base culture is Southern, just as my first language is American English with a Southern accent. Having travelled or lived in 48 states, including North Carolina, Massachusetts, Ohio, and California, I learned a great deal about America. Going into the Army helped.

Today, after more than half a life spent abroad, I have learned something about other cultures.

In Southern culture, to keep harmony, we often apologize for things we did not do. If a person walks into me causing an RC Cola spill and a dropped Moon Pie, I will instantly apologize even though it was the other person’s fault. This is the Southern way. The person who bumped into me will probably offer to buy me another cola and Moon Pie, and I’ll say no problem, I should have been more careful where I was standing. Harmony is what holds us together.

Japanese do the same, as will polite British.

Apologies: Fuel on the Flames

However, some other cultures in the United States and abroad take any apology as an admission of guilt. These traits are useful for lawyers, as people apologize for things for which they are not responsible, then end up in court trying to explain away the apology.

Given that Japanese have lived in the same neighborhood since forever, one might think they would understand their neighbors a little better. But in the early ’90s Japanese began apologizing, such as with the Kono Statement. This made things worse. The Chinese kept heaping it on. Koreans, being useful stooges for Chinese, got involved more heavily. The apologies were nitrous oxide to the comfort woman rocket.

Most amazing about all this is that a Japanese communist started it, and Japanese kept making it worse by apologizing.

This puts researchers like me in a pickle. When we say truthfully that this is all an information war, others will truthfully reply that the Japanese have admitted to this and apologized, to which I answer, doggone, they did. And it was wrongheaded. And they will probably apologize again.

Japanese: Their Own Worst Enemies

Our great friends the Japanese have been their own worst enemies in this issue.

Many Americans have asked why Japanese continue to apologize for something that did not happen. My answer? “Because they are Japanese. They would apologize for an earthquake if it made you feel better.”

This is a great aspect of the Japanese personality, but some Koreans and Chinese weaponize it. Most Koreans I meet seem to like Japanese. But there is a subset of rabble-rousers. Sort of like Black Lives Matter. I have gotten along with African Americans from coast to coast, and especially with African American soldiers, yet we have a subset of blacks and whites that would love to see us in a race war. Such fissures are readily exploitable by, for instance, the never ending news coverage of white police officers shooting black suspects.

Something similar happens in the Korea-Japan issue, with Korea playing perpetual victim and throwing tantrums that can and do become violent. Chinese and some communist entities like Chong Dae Hyup seize on those Koreans and wind them up, just as we have done in other countries, and as others have done to us. This is especially true of those working to foment black-white divisions even as many of us wish to embrace everyone as Americans.

The communist organization Chong Dae Hyup in Seoul showing me a map of statue deployments. If they had done their homework, they never would have allowed me in their headquarters. (Cr. Michael Yon)

The first accusation the Japanese communists made was that Japanese kidnapped just over 200 women on Jeju during the “woman hunts.” That lie was eventually blown out the water, and author Yūto Yoshida himself admitted that he made the whole thing up. By the early 1990s, the inflation rate had the number up to 20,000 kidnapped. That figure soon jumped to 200,000. Finally, the accusers put it at 400,000. Apparently realizing they overreached and were causing even believers to disbelieve, more recently the accusers have dialed it back to 200,000. 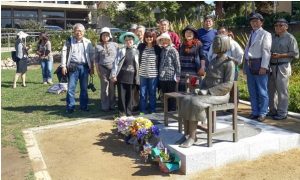 These are not “fire and forget” statues, but pilgrimage sites. Glendale, California. (Cr. Michael Yon)

To be sure, there were a handful of sex slaves in Indonesia, but those were limited in number and all parties were punished either by Japanese themselves during the war, or after the war during war crimes trials. That was all settled generations ago.

The ianfu (comfort women) system existed. They were paid prostitutes, just like those Americans patronized along Hotel Street in Honolulu before and during WWII, and in Korea after the war.

Importantly, from 1910 to 1945, Korea was Japan due to the annexation treaty. Koreans were Japanese citizens then, just as Hawaiians are US citizens. They held public office and hundreds of thousands of Koreans joined the Japanese Army. Many served as officers, including President Park Chung-hee, the father of the recent President Park who was swept from office under scandal earlier this year.

Interestingly, when Koreans say Japanese kidnapped huge numbers of Korean women, they accidentally call their own ancestors cowards. There is no record of anyone fighting back, but there are advertisements from newspapers for ianfu, and prostitution was perfectly legal.

Bring this up to Koreans, though, and you might experience hwa-byung, meaning “anger disease” or “fire disease.”

Hwa-byung is a mental illness specific to Koreans and can result in explosive anger and physical attack. Hwa-byung has even been listed as a mental condition in the Diagnostic and Statistical Manual of Mental Disorders (DSM), the standard catalog used by mental health practitioners to diagnose psychological problems.

Another point of interest is that many of the “Japanese” that one will see protesting in favor of Japanese payments are Zainichi. Zainichi are ethnic Koreans born in Japan. Their Japanese is fluent. They are Japanese citizens often with Japanese names. They are indistinguishable other than often having Korean sympathies.