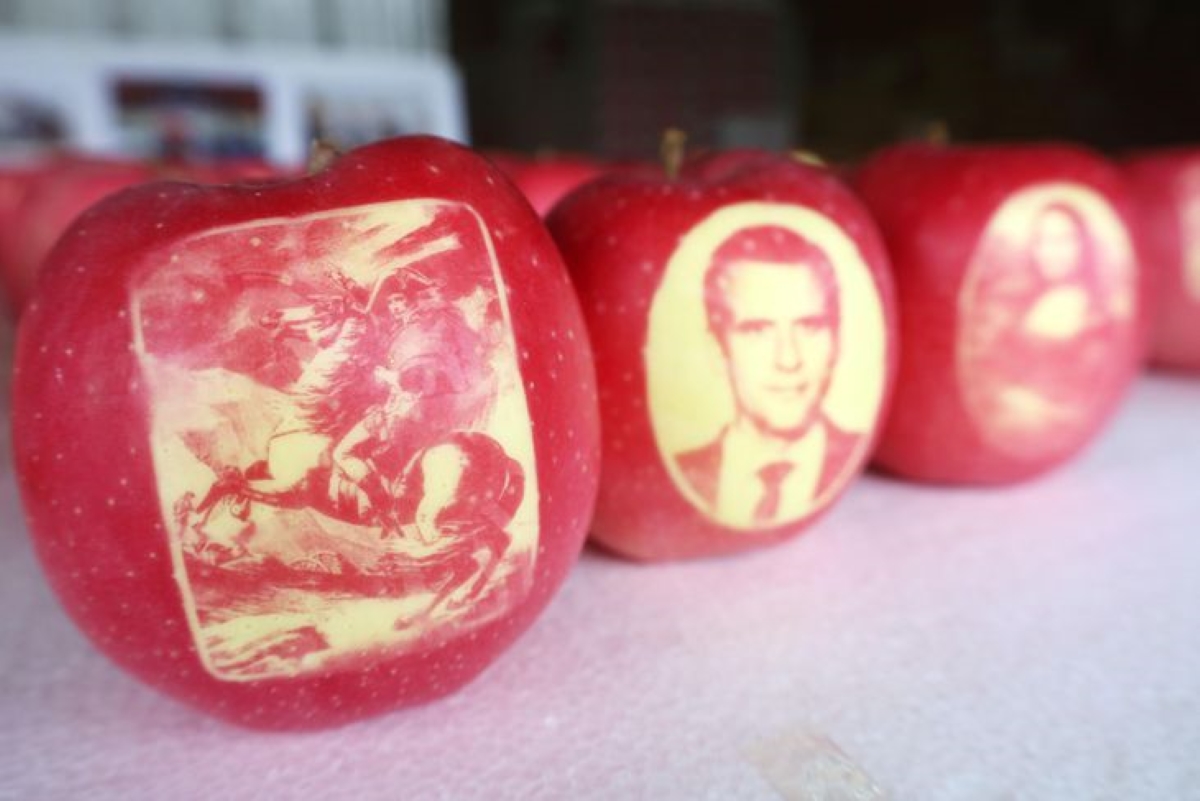 On October 26, boxes of apples decorated with the face of French President Emmanuel Macron and other designs were shipped from Hirosaki, Japan’s capital of apple production, to France.

Sato Fukuroten Co.Ltd.,a farm equipment-seller in the northern Aomori Prefecture city of Hirosaki, packs up these apples every year as part of a goodwill exchange between Japan and France.

The apples are decorated with a total of 17 different designs, including Leonardo da Vinci’s “Mona Lisa,” Ukiyoe artist Hokusai’s “Thirty-six Views of Mt. Fuji,” and this year, the figure of “Napoleon”, to mark the 200th anniversary of the French emperor and military leader’s death.

How are the designs applied to these apples? First, they are placed in bags that block sunlight in order to make their skin pale. Later, as the fruit grows, the bag is removed and a stencil with a pattern is placed over the apple. As the apples ripen, the uncovered skin reddens as normal, leaving a pattern in the shape of the part left covered by the stencil.

The company has had a relationship with France since 1993, when Philippe Schuller, Secretary General of the Montreuil Horticulture Association in France and enthusiast of fruit marking, contacted them to learn more about Sato’s apple designing techniques.

Yoshihiro Sato, 73, the Japanese company’s president, went to France to meet Schuller. He discovered that France had a tradition of more than a hundred years of attaching handmade stickers to decorate apples and other fruits with portraits and coats of arms. These were considered luxury items, and were sent as gifts to the royal family.

The tradition had disappeared after World War I and II, but Schuller and the Horticultural Association of Montreuil, in an eastern suburb of Paris, wanted to revive this historical French heritage. This led to the cooperation between the association and Sato Fukuroten.

In 2002, thanks to Philippe’s presentation, Sato exhibited the company’s decorative apples at the Royal Garden of Versailles, gaining further attention. Since then Hirosaki City has been actively fostering broader cultural ties with France.

For the last 10 years, personalized apples have been sent to the Élysée Palace each year, with messages of praise and appreciation from former French presidents received in return ー among them Jaques Chirac, Nicholas Sarkozy, and most recently, Emmanuel Macron.

A total of about 100 pieces were shipped off to the Palace this year.

“It didn’t rain much this spring, and I was worried about the coloring in the autumn due to the lack of sunshine,” commented Sato. “But we managed to send them,” he added, smiling.

(Read the Sankei Shimbun article on which part of this report is based in Japanese at this link.)