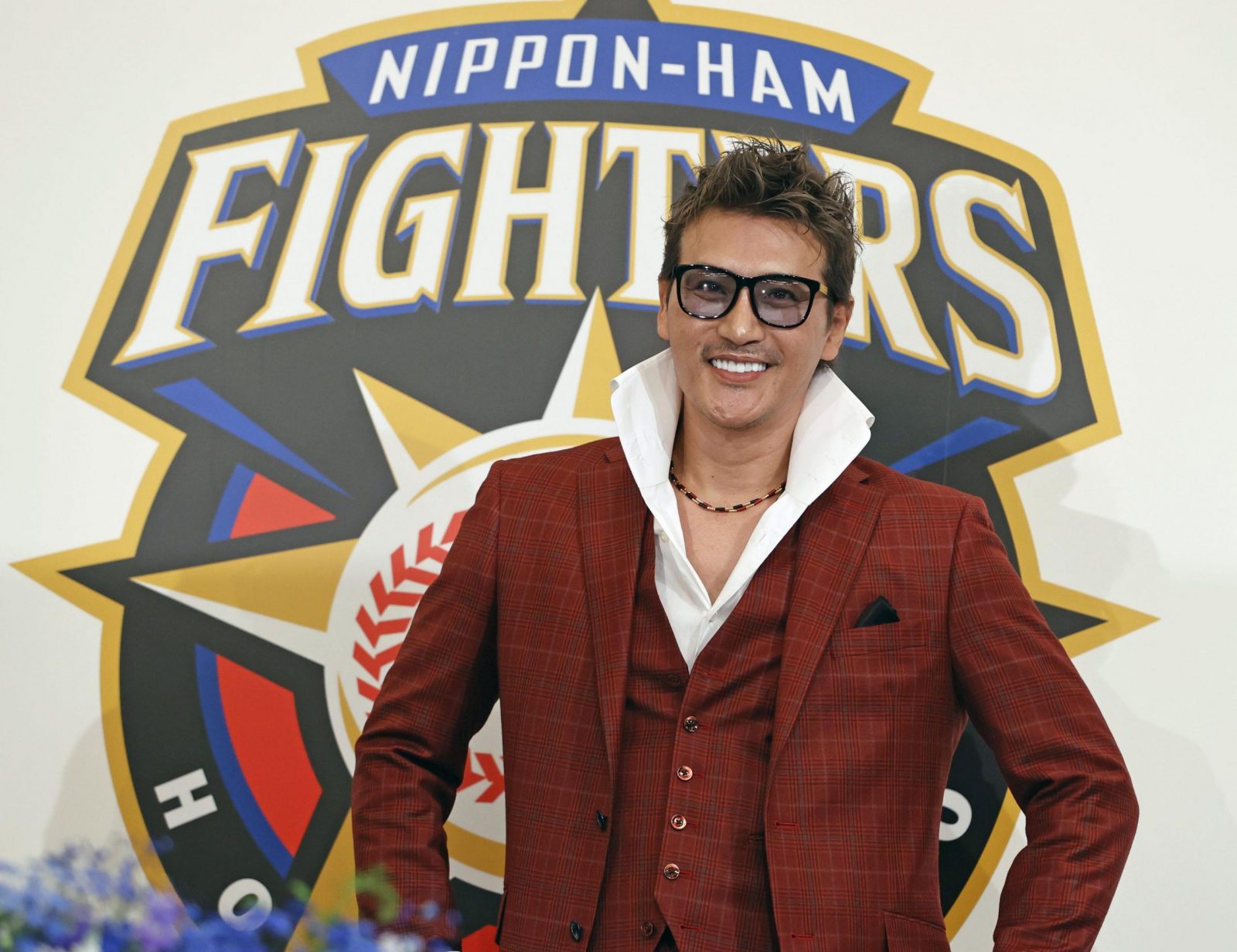 Tsuyoshi Shinjo is introduced as the Hokkaido Nippon Ham Fighters' new manager on November 4 in Sapporo.

Tsuyoshi Shinjo has always been a performer. And the former outfielder lived up to that reputation on Thursday, November 4 when he was introduced as the new manager of the Pacific League’s Hokkaido Nippon Ham Fighters.

Wearing a maroon suit, sunglasses and an unbuttoned white shirt with an outrageously high white collar, Shinjo made it clear from the outset that he intends to inject some new life not only into the Fighters but also into Japanese baseball as a whole.

“Don’t call me manager, I want to be known as ‘Big Boss,’” Shinjo told a packed press conference in Sapporo, explaining that is what he was called on the Indonesian island of Bali where he spent the last several years.

The surprises didn’t stop there. After making an entrance that was more reminiscent of John Travolta in Saturday Night Fever, Shinjo laid out his plans for the struggling club.

“I won’t aim for a championship from the outset,” Shinjo said. “If the expectations are too high, the players will be overwhelmed. We’ll practice day by day at first and build on our experience. Then around September if all goes well, we can say we are going for the championship.”

Before Thursday’s press conference, Shinjo visited the Fighters new stadium that will open in 2023 and said it’s a venue that will “surprise the world.”

ES CON Field Hokkaido in Kitahiroshima will have a retractable roof and a capacity of 35,000.

The Fighters have struggled in the past three years at Sapporo Dome, failing to reach the postseason under former manager Hideki Kuriyama. Like all teams in Japan, attendance was negatively affected by the coronavirus pandemic.

The 49-year-old Shinjo has no previous managerial experience but was hugely popular as a player for the Fighters and his original team, the Hanshin Tigers. He played briefly in Major League Baseball for the New York Mets and San Francisco Giants.

He helped the Fighters win their first championship in 2006 since the team moved to Hokkaido, and then retired at the end of the season.

It’s clear the Fighters want to tap into his popularity to get fans back at the stadium. The team could have hired former player Atsunori Inaba, who guided Japan to a gold medal at the Tokyo Olympics, but that wouldn’t have the immediate impact that Shinjo brings. Inaba was eventually appointed GM.

“He (Shinjo) made a huge impression on our fans with his performances as a player,” said team president Koji Kawamura. “He helped us become No. 1 in Japan.

“Now we want him to build a team that can win but also one that will make the fans happy. Those are his two missions.”

During his playing days, Shinjo once made a dramatic entrance at Sapporo Dome when he was lowered to the field from the rafters near the ceiling. He also famously took the field dressed up as Spiderman.

He said Fighters fans can expect more of that, and wouldn’t rule out the possibility of picking up a bat to pinch-hit. He attempted a comeback last season but was not signed after taking part in an open tryout in December.

When it comes to baseball, Shinjo is no joker. Starting his pro career with the Tigers way back in 1989, Shinjo impressed fans with a combination of speed, stellar defense and a surprising ability to hit home runs.

Shinjo certainly has his work cut out for him. He arrives at a time when the team is in desperate need of a makeover. In addition to the lackluster results on the field, the past season was mired in scandal involving first baseman Sho Nakata.

The Fighters suspended Nakata indefinitely for assaulting a teammate and then shipped him off to the Yomiuri Giants while getting nothing in return.

Shinjo was the first Japanese-born player to appear in a World Series. He went 1-for-6 with three strikeouts for the San Francisco Giants in 2002. The team lost four games to three against the Anaheim Angels.

“I’ve noticed a cloud hanging over the team for the past three seasons,” Shinjo said. “Of course, there was the coronavirus and that contributed but the players seemed tense. When I take over there will be no corona and the stands will be full.”

While Shinjo’s behavior could annoy baseball’s old guard, there is no doubt his presence on the Fighters bench will inject new life into the game.

“I think his appointment is a great idea,” said a Japanese baseball fan and Tokyo businessman named Shigeru Uchida, who spoke to JAPAN Forward. “The Fighters may not win at first, but Shinjo understands that baseball is more about wins and losses. It’s also about entertaining fans and that’s something that has been lacking in recent years in Hokkaido.”

Former Fighters manager Trey Hillman, who guided the Pacific League club to a Japan Series title in 2006, believes Shinjo will bring positive vibes to the team in his new leadership role.

“Although many may be surprised by the hiring of Shinjo, I must say there is no doubt in my mind that he will bring a calm confidence to the club and will obviously be great with the fans,” Hillman, who managed the Fighters from 2003-07 and currently serves as the Miami Marlins third base coach, told JAPAN Forward in an email. “His teammates loved playing with him and I loved managing him. I wish him and the rest of my Fighter family nothing but the best.”