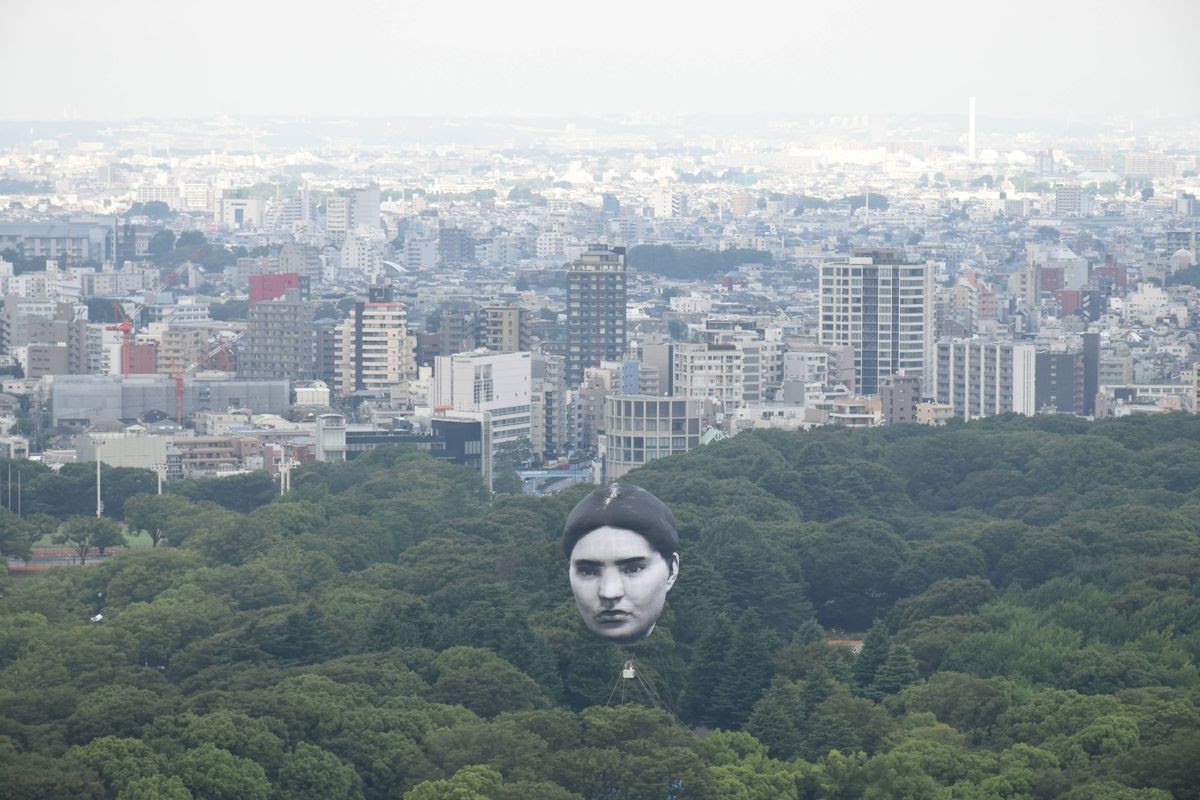 Caption: A mysterious face appeared in the sky of Tokyo where the National Yoyogi Stadium (left) and other venues can be seen on the morning of July 16.

On the morning of July 16, one week before the Tokyo 2020 Olympics Opening Ceremony, a huge face-shaped hot-air balloon was seen floating in the sky near the Yoyogi National Stadium.

Whose face was it? What was it about? This  dream-like mysterious sight is, in fact, a contemporary art project.

The project is titled “Masayume,” meaning “a dream come true”. It came into being after the organizers recruited faces from all over the world to select what they called the “one real face” to float in the Tokyo sky.

The project was organized by ｍé (eye), a contemporary art team made up of artist Haruka Kojin, director Kenji Minamigawa and Hirofumi Masui who was in charge of production and installation. It was scheduled to be held last year as part of the Tokyo Tokyo FESTIVAL Special 13, a cultural project sponsored by the Tokyo Metropolitan Government, but was postponed for one year because of the COVID-19 pandemic.

The original idea came from Kojin who recalled a dream she had when she was 14 years old: “A dream in which a human face floats in the sky like a moon.” She couldn’t remember what kind of face it was, but had an intuition in the dream that it was an artificial landscape that adults had set up around the city with a face from some other part of the world.

“It gave me the courage to do something crazy,” she said. It was a work of art intended to question the relation between the individual and the public during the Tokyo Olympic year.

How would the public react to such an apparition floating like a cloud in the sky?

The Importance of Changing One’s Outlook

Two years earlier, more than 1,000 men and women of all ages and from all over the world responded to this mysterious classified ad. A meeting was then held and participants considered what kind of face should be considered.

In the end, Kojin chose only one face. The key factor, participants agreed, was selecting a face that many people’s eyes kept coming back to look at.

“I really think this face is the only option. It’s a face that makes us think about our existence. I would even go so far as to say that it is the face of philosophy,” Kojin explained.”

The identity of the person behind the face has not been made public. There was also a fear that reproducing the face in full color would make it look like an advertisement, so she chose a monochrome palette in black and white instead.

The three members of the team discussed the pros and cons of the project amidst the unexpected COVID-19 pandemic. Minamigawa thought that it was important to consider how we change the way we look at things when our survival is at stake.

When a mine collapsed in Chile in 2010 leaving 33 workers trapped underground for 69 days, she recalled how they  survived by using their imagination to become pastors, doctors, and reporters, and recreating a “small society”.  Minamigawa hoped “Masayume” would allow people to feel the importance of changing their perspective, even when it seems to contradict common sense.

After three years of preparations Kojin’s dream became “Masayume.” “There is something mysterious here,” she said. “It is a miracle that we succeeded in such a difficult situation.

Those who responded to the classified ad, and everyone involved in the project worked earnestly, betting on a mysterious moment that seemed devoid of meaning and rationality. I hope more people will see this project through social media and that it will stimulate further creativity.”

The time and location of the balloon’s appearance was not announced in advance in order to avoid creating a crowd.

Don’t worry if you missed the July 16 flight around Yoyogi. Just keep looking up while you move around the city, as the balloon is expected to fly over central Tokyo several times this summer.