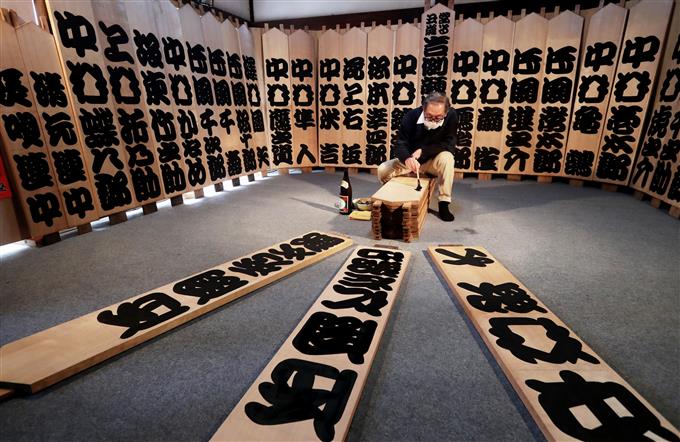 There are many cultural traditions to enjoy as we approach the holiday season in Japan. Maneki kaki calligraphers who create beautiful stylized plaques are among those craftsmen becoming especially busy as winter season festivities line up.

Coming from the word maneku, which means roughly to invite, the expression is used to beckon good luck and fortune. By extension, maneki kaki are hand painted billboards with the names of the performers publicly displayed where fans can see them as the performance dates approach. The style used is said to be auspicious, to bring a full house to theaters. 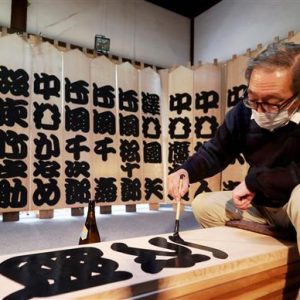 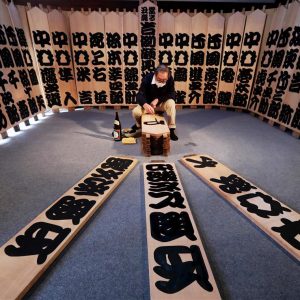 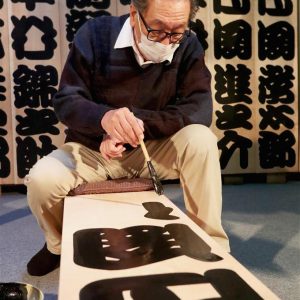 The Sankei Shimbun recently visited one such craftsman, Gyokusei Inoue, 75, as he was writing the names of various actors in rounded and thick strokes on a cypress plaque in a style used for celebratory occasions called Kanteiryu. The wooden plaques are about 1.8 meters long and 30 centimeters wide.

As we observed him, he carefully traced the characters for famous kabuki actors from all over Japan, such as Kataoka Nizaemon.

The wooden plaques for the “Festive Kaomise Production” were displayed for the first time on November 6 at Myodenji Temple in Saikyo Ward, Kyoto. Many people visit the temple in a regular year to pray and express their good wishes for the kabuki actors.

Display of the maneki kaki was a small yet tangible sign that life goes on for the popular performance season at Kyoto’s kabuki theater, Minamiza, in Kyoto’s Higashiyama district.

Despite the exceptional circumstances, this year’s annual kabuki’s event,  “The Festive Kaomise Production: Grand Kabuki Starring Actors from East and West” will take place at Minamiza from December 5 to December 19 (excluding December 11).

The annual event has been so lionized that, in the Edo Period (1602-1868) it was used to indicate the month when the newly contracted actors for the following year would perform for the first time in front of the public. Today, it has become an all-actor performance, and a big event that many look forward to in Kyoto when December comes knocking at the door.

The “Festive Kaomise Production” is Minamiza’s first scheduled set of performances in more than ten months. Due to the onset of COVID-19, all plays were cancelled for the season until recently.

However, things are slowly looking up. From the second half of November, the traditional stylized maneki kaki have been displayed outside of the Minamiza Theater announcing the incoming performance season.

For those interested, performances at Minamiza will be ongoing from December 5 to December 19. To ensure the safety of all participants, the length of the performances has been shortened and the spectator capacity has been halved to roughly 500 people per performance.

Prices are also reduced, given the shorter performances. So if you feel safe and plan to be in Kyoto, check out the page here for more information.