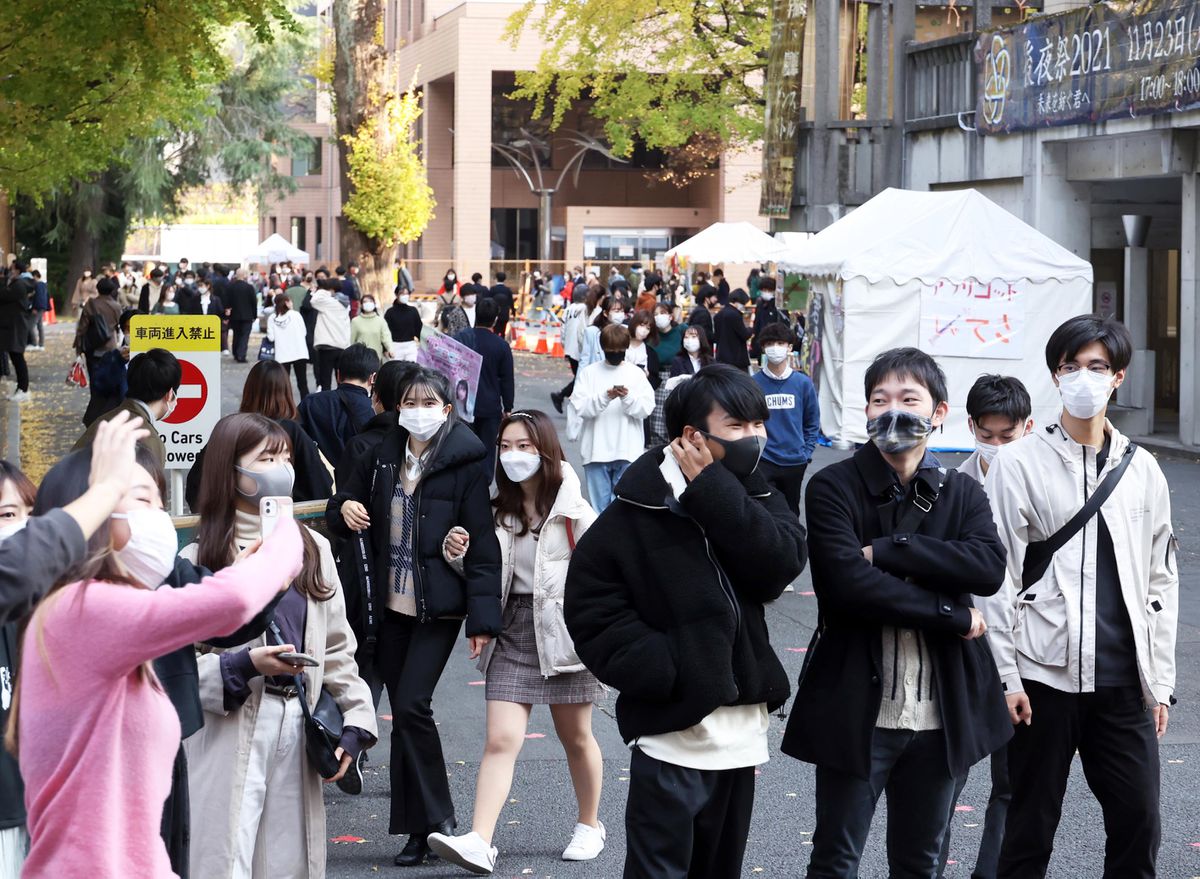 University autumn festivals are an important tradition in Japan. With a drop in COVID-19 cases, this year some universities have organized live events with limited visitors to carry on the tradition, while others have held the events online, in some cases with elaborate programs.

Looming in the background is a sense of crisis not just academics, but also the acquisition of cultural knowledge through student club activities and campus festivals. These events are considered valuable occasions for cultivating exchanges, especially for first and second year students who were deprived of peer interaction during the pandemic closures.

“The performance will start soon! Please come and see!” Energetic student voices could be heard calling the crowd to join them at Keio’s Mita campus in Minato-ku, Tokyo, where the festival began on November 20.

Last year’s event was only virtual, so this was the first time in two years that a live Mita Festival took place. At the four-day event that ended November 23, up to 5,000 participants were allowed each day using a free ticket system. Some outsiders were also allowed, including graduates belonging to participating organizations.

To prevent the spread of infection, food and drink stands were banned, and some events were streamed online.

21-year old Katsuki Shimizu, a third-year Keio University student and executive committee chairman, explained how the university’s freshman and sophomore students learned by in-person meetings so they would be ready to play a central role in organizing the campus festival from next year on.

“Since ours is a large-scale school festival which draws 150,000 to 200,000 visitors, it is very important to pass on our management skills,” he said, adding: “The COVID-19 pandemic isolated us from each other, physically and mentally, so we also want to take this opportunity to re-connect.”

“Dancing Crew JADE”, the students dance club, performed street and jazz dances on the stage of a large classroom. “Many classes are still held online, so I’m glad that all the members came,” said Mei Hotta, an 18-year-old freshman. “Dancers are encouraged by the audience reaction, so I am grateful that we were able to perform in front of a live audience,” she said, smiling.

Shukutoku University also held its autumn festival on November 13 and 14 at its Tokyo campus in Itabashi. But here, only faculty members and students were allowed to attend the activities.

“There were no outside visitors, so it felt more bleak compared to a normal year,” said a representative of the University Affairs office. “But it was meaningful all the same given that most of our classes have been online and there have been fewer occasions for students to interact.”

The Komaba Festival was held from November 21 to 23 at the University of Tokyo Komaba Campus in Meguro-ku, but it was all virtual.

Initially, they had planned a hybrid type combining face-to-face and online events, but finally opted for the second solution because Japan’s pandemic situation had not improved by the August deadline for planning the event.

Online events are unquestionably less exciting compared to face-to-face ones where you can feel the vibrant campus festival atmosphere. So why did they decide to go ahead with it?

“We wanted to carry on the school’s autumn festival tradition to help make up for the way the COVID-19 pandemic has affected our students’ academic and cultural activities,” explained the Komaba Festival executive committee member.

Participating organizations set up a dedicated site for planning the festival, introducing various popular projects. One was  the “University of Tokyo LEGO Club,” which explained its activities in a YouTube video.

“We had to scrap mock refreshment booths, where most interactions usually take place, so we focused our public relations activities on the members’ SNS site, emphasizing the uniqueness of the online event,” the committee member added.

Aiming for Next Year

On the other hand, there was great disappointment at some universities which had to cancel festival programs for the second year in a row.

Kyoto Sangyo University of Kyoto City, for example, canceled its “Kamiyama Festival,” which had been to begin on October 30.

“This is the second consecutive year we have had no chance to promote student activities or pass on the culture and management techniques of the campus festival,” said one of its organizers. “We are worried about carrying on this tradition.”

Since their festival is usually held earlier than other universities, they lacked the time to even organize an online event. “This may lead to the loss of our campus’ vitality,” the organizer added, “so we will do all we can to hold it next year.”