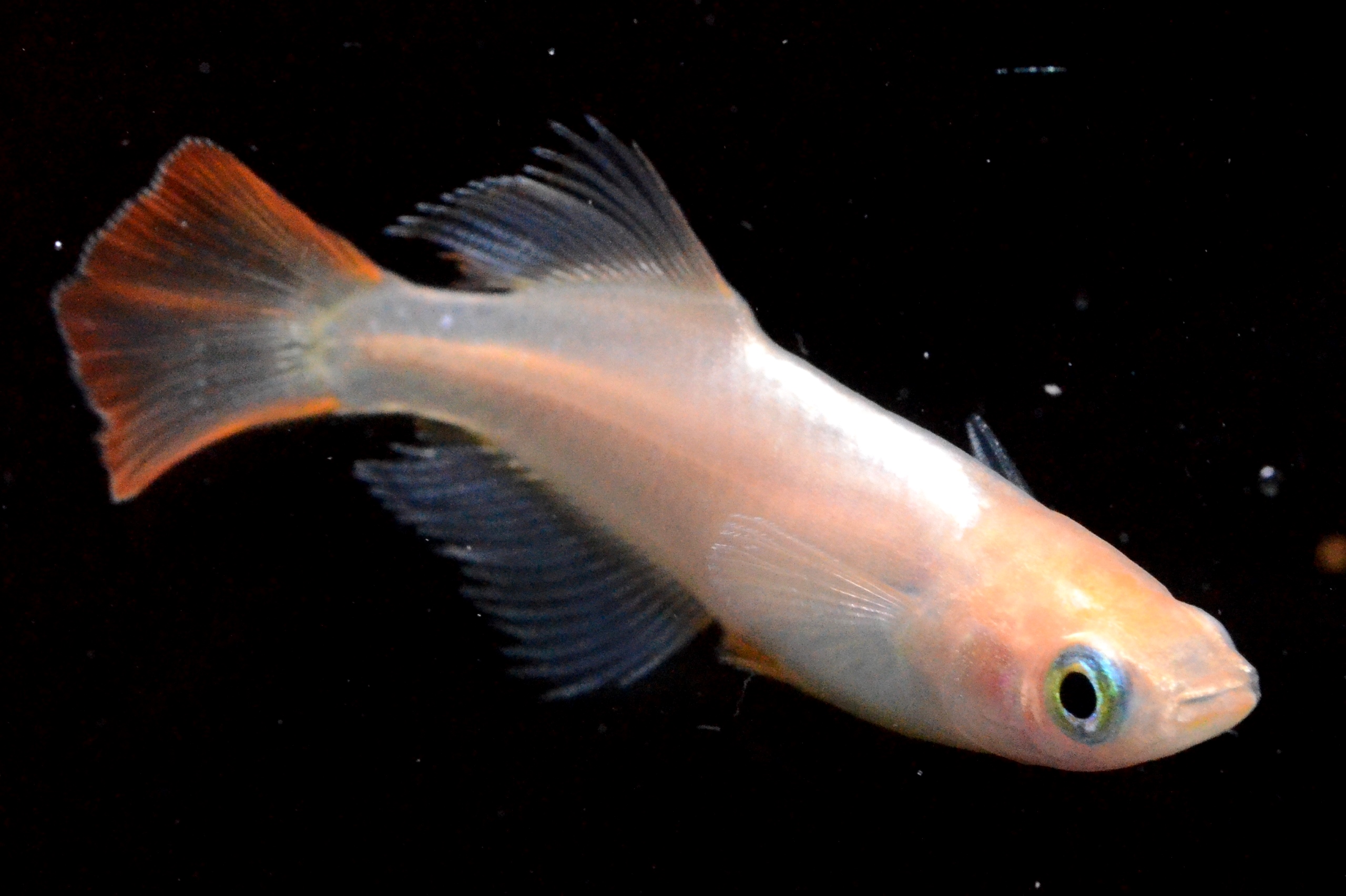 A reader sent us a photograph along with a letter that said, “A rare medaka variation was born from a mutation.” Normally when you think of a medaka, also known as Japanese rice fish, you imagine a small colorless fish. But the one in the photograph was an ultramarine color, with scales that appeared to be glowing.

Apparently medaka breeding has become popular recently, due to people spending more time at home amid the COVID-19 pandemic. Hoping that it could well be a new variation and feeling exhilarated by the possibility, I went to see the person who sent us the letter.

The letter writer is 77-year-old Koji Uchiyama from Higashiosaka City, Osaka Prefecture, a Sankei Shimbun reader since around 1951, back when the picture story Shonen Kenya was published in the newspaper.

First, as a detective reporter, I needed to see this rare medaka with my very own eyes. When I stepped inside his house, there were a number of fish tanks with medaka lined up in the entrance hall.

Mr. Uchiyama has been rearing medaka for 4 years, since having received some fish as a gift and thinking that his grandchildren might enjoy them.

In years past, medaka were commonly found in rice paddies and streams. But in recent years, the population of this tiny fish has dramatically decreased, and in 1999 it was designated as a category II endangered species by the Red Data Book of the Ministry of the Environment. On the other hand, medaka sold in pet stores are mostly bred for ornamental purposes.

“The fish tanks quickly increased because a medaka that a neighbor gave me kept laying eggs,” said Mr. Uchiyama. Even the variations of his medaka have increased to eight, which include the “Tekkamen (Iron mask)”, with their shiney bodies from the tip of their mouths to their backs, the cute round-bodied “Daruma”, and the “Shinkai (Deep sea)”, with their beautiful blue internally lit bodies.

“Two summers ago, when I was raising the hatched eggs of a Tekkamen medaka, I noticed that one of them had a very unique color,” he told me. “I put the fish in a different container and let it live out the year.”

“This is the one ー it grew bigger,” Mr. Uchiyama said, pointing to the medaka in the photograph. He named it the “Gunjo (Ultramarine) medaka”, and sent the picture to Sankei Shimbun. However, Mr. Uchiyama explained that the fish had died in the middle of July.

“Around 10 days before it died, the medaka stayed at the bottom of the tank and appeared weak, so I figured it was nearing its end. It’s unfortunate, but since many of its offspring are still left, I want to try selective breeding one more time.”


Easy Care, Even for Beginners

Was Mr. Uchiyama’s medaka a new variety in the first place? This past March, I took the photograph to Medaka-ya Me, a store specializing in improved medaka varieties which opened near the Kintetsu Fuse Station in Higashiosaka City.

They are also inexpensive. For instance, they charge ￥50 JPY (about 45 cents US) per fish for the “Himedaka”. Even the popular “Miyuki medaka” sells for only 300 JPY (about $2.70 USD) each. They also sell an expensive variety, priced at ￥20,000 JPY (almost $180 USD) each. This one is called the “Mariage long fin”, which swims gracefully and looks like a gemstone jewel.

Many of the customers are beginners or people who have recently started keeping medaka as pets. In fact, the reason for the fish’s popularity is that they are easy to handle and can be kept in a small space. Raising medaka does not require special equipment or temperature control, and it is not costly or time consuming. Technically speaking, they can even be kept in a styrofoam box.

Also, one of the joys of raising medaka is the breeding process. They lay eggs 2 months after they are born, and the fry will become adults in also about 2 months. By raising them in pairs, you can increase their number. There is also the possibility that if you crossbreed medaka with rare characteristics, perhaps a new variety of “improved medaka” will be born.

I had Medaka-ya Me’s Kazunari Momota, 30, take a look at the photo of Mr. Uchiyama’s medaka. “I think this is a Tekkamen. It was indeed a rare variety a little while ago. Nowadays, because so many people have medaka as pets, new varieties are born one after another and they quickly become old news. Discovering a new variety is also a matter of speed.”


Popularity on the Rise

“It’s only recently that improved medaka is becoming well-known due to a lot of media coverage,” says Takayasu Ooba, director of Japan Medaka Association (Headquarters Office, Hiroshima Prefecture), a union established by enthusiasts from all over Japan. “The ‘stay home’ lifestyle due to COVID-19 could be one of the triggers, but the fish have always been popular. The number of medaka lovers is on the rise,” Mr. Ooba adds. That fits the evidence. The current number of association members is the highest ever at around 300 people, with three new branches opening this year.

Mr. Ooba, who is also a staff member at the nationally renowned medaka speciality store, “Medaka-no-yakata” explained. “Recently, many of the customers that come to the store are families. It’s often considered that koi and goldfish are men’s hobbies, but medaka are also popular among women. There’s even one case where three generations, the mother, the daughter and her children, are all raising medaka as pets.”

Twice a year, the association holds a fair where around 300 medaka are exhibited by enthusiasts from all over Japan, and where new varieties are certified and registered. The 2021 autumn fair was held on September 18.

There seems to be infinite possibilities in breeding improved medaka. For me, this adventure wasn’t a dramatic case of the “detective reporter finds a new variation!”, but watching how the medaka swim around inside the tanks caused me to lose track of time. I felt as if I understood a little, why medaka enthusiasts pour their love into those tiny living things.