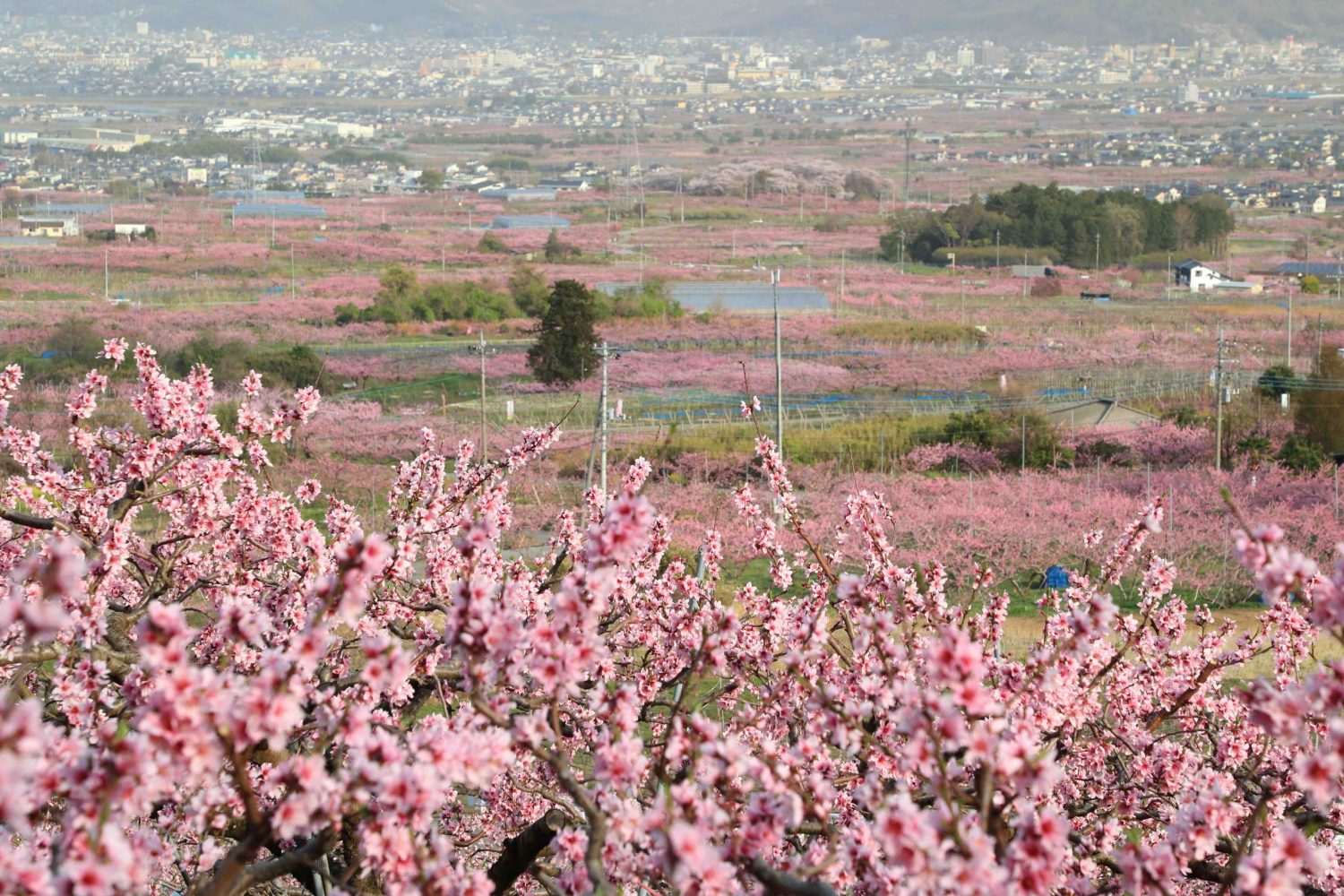 Pink flowers paint the basin-shaped valley. The atmosphere of “Togenkyo (peach paradise)” envelopes you when the approximately 300,000 peach blossom trees bloom one after another.

Yamanashi Prefecture is famous for being a fruit kingdom. And located at its center is Fuefuki City, in a region that boasts the largest quantity of peach and grape production in Japan.

Beginning of April, I walked along a peach farm that spreads across the area’s alluvial fan. When I climbed up a hill with an elevation difference of 200 meters and looked through to the many flowers below, a landscape of peach fields spread before my eyes.

Besides the breathtaking scenery, it is during this season that farmers hoping for an abundant crop have their hands full with various tasks.

“This year, the peaches bloomed a week to 10 days early. The flowers are beautiful, but spring season for us is the busiest,” says Noboru Kono, 67, who was picking the flowers and buds with his wife.

Mr. Kono grows 14 different varieties of peaches. In addition to picking the peaches, he also does artificial pollination as well as disinfection. Because some farmers were only able to ship 20% of their normal crop due to the “shot hole disease” (also known as Coryneum blight) which was rampant two years ago, they have been especially thorough with the disinfection process. Come May, the fruits will be ready to be picked and bagged.

With the well-drained topography and soil of the Kofu Basin, and its climate with a big temperature difference between day and night which is unique to a basin, Fuefuki City is considered to be a region well-suited for growing fruits.

However, the city is not immune to the effects of the new coronavirus pandemic.

During last year’s peach and grape picking season, the number of visitors to one tourist farm in the city dropped by more than 80%. Bus tours were canceled and tour groups completely disappeared. Moreover, the situation remains just as unpredictable this year.

Peach harvesting starts in late June. “Yamanashi peaches are delicious because they are firm and sweet,” explains Mr. Kono.

I hope to visit once again during the summer season and bask in the “flavor of peach paradise” as I bite into a peach.

(Read The Sankei Shimbun photojournalism column in Japanese at this link.)