[Corona ni Makeruna] Half Wild Species on ‘Rabbit Island’ Feel the Effects of COVID-19, Too 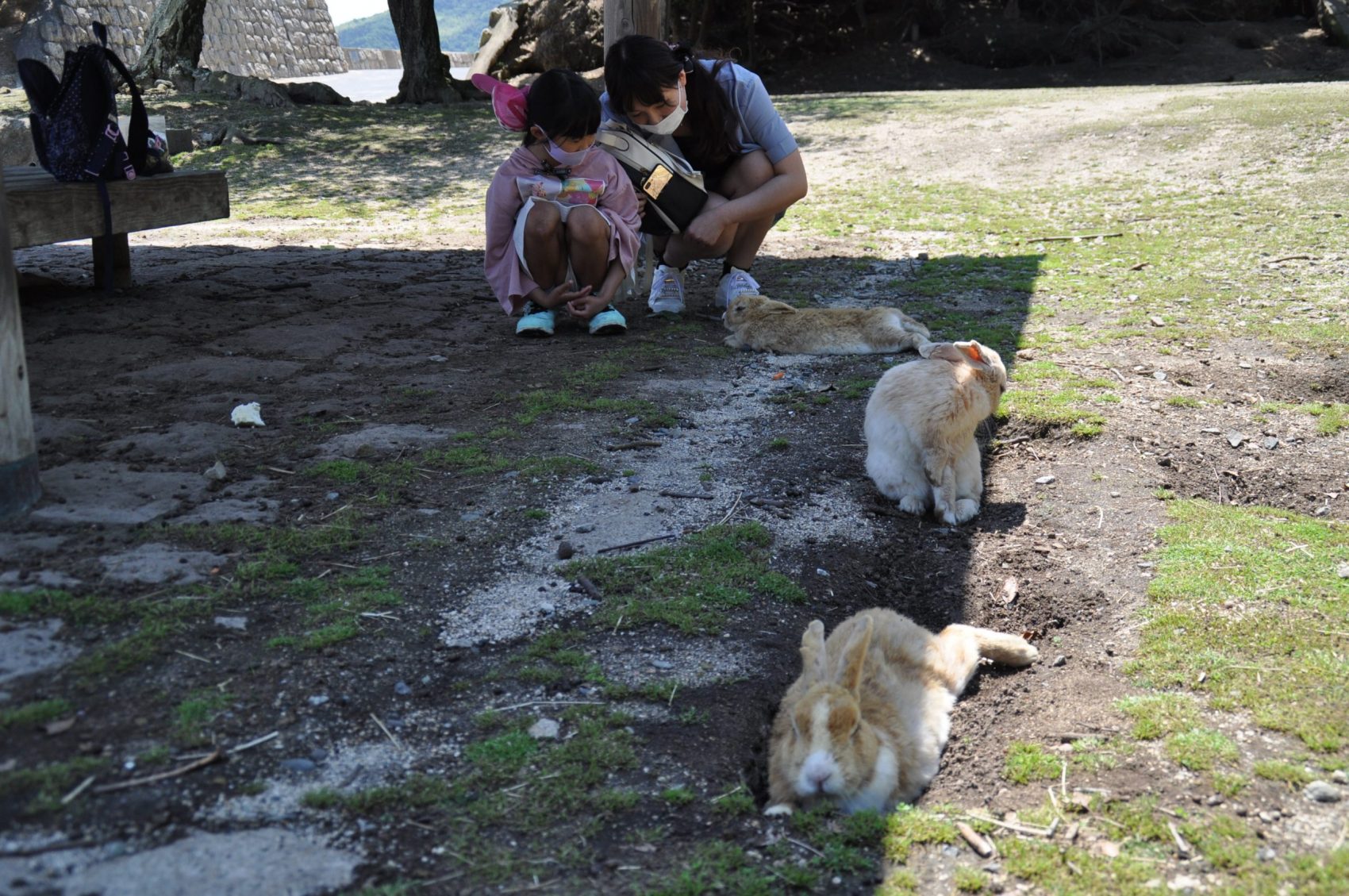 The wildlife of 'Rabbit Island' are cute and unafraid of humans, but their behavior can be combative when the population rises and competition for food is required.

On Okuno Island, also known as Rabbit Island, something very unfortunate is underway. Located in Takeharashi in Hiroshima Prefecture, the island is a famous tourist destination, attracting many tourists who come to see the large numbers of rabbits that inhabit the island.

The Ministry of the Environment is responsible for the management of the island and claims that, at one point, there were as many as 1000 rabbits on the island. However, with the spread of COVID-19 the number of tourists to the island has decreased and the rabbits subsequently can no longer get as much food, which seems to have caused their numbers to drop significantly.

“Where on earth did they go?”

I recently visited the island to investigate the situation. Floating on the Seto Inland Sea, the island is 4.3 kilometers in circumference and about 15 minutes by ferry from Tadanoumi Harbor in Takeharashi.

After landing on the pier, I spied one family from the ferry that had come to see the rabbits and seemed disappointed that there were none to be seen. After walking for a while we finally came across three rabbits which were sprawled out on the ground. One woman (39) who had come all the way from Matsuyamashi said that when she “came here two years ago there were rabbits running all over the place. I brought the kids along because I thought they would enjoy it too, so it’s quite disappointing to see that there are so few rabbits.”

During the war, Okuno Island was used as a site for the production of poisonous gas. It was once referred to as “the island that was erased from the map.” Littered with the remains of gas storehouses and bomb shelters, the island continues to testify to the importance of peace even today.

In 1950 it was incorporated into Seto Inland Island National Park. After rabbits belonging to elementary schools were brought from outside the island and released into the wild in the early 1970s, the number of rabbits on the island increased. Although there is some variation in the color of their coats and the shape of their ears, they are all European rabbits and have a very high reproductive capacity.

The Impact of Food From Tourists

Over the past eight years, Okuno Island has received a lot of attention on social media as “Rabbit Island,” with large numbers of foreign tourists visiting the island as word spread abroad.

Takayuki Yamazaki, a park ranger of the Hiroshima branch of the Ministry of the Environment, explained that “in the survey we only counted rabbits that we could see. So, there were probably more than 1000.”

The reason behind this increase is thought to be the food brought by tourists. They bring vegetables, such as carrots and cabbage, as well as pet food, which is more nutritious than the grass and leaves that grow in the wild. It is believed that this food has increased the reproductive capacity of the rabbits.

However, with the spread of COVID-19, there has been a drastic decrease in the number of visitors to the island. According to a survey carried out by the Ministry of the Environment between June 2020 and January 2021, the number of rabbits has shrunk to about 500-600.

Although the number of rabbits is decreasing, it does not seem that many are dying from starvation. Mr. Yamazaki speculated that “it’s possible they have moved to the mountains in search of vegetation.”

It seems, however, that the situation for the rabbits in the peak period when there were 1000 of them was not without problems.

In contrast to their cute appearance, rabbits are fiercely territorial, violent-tempered, and there are some that will even fight until they have killed their opponent. With such a large number of rabbits it is easy for territory to become cramped, and in the past many wounded rabbits could be seen.

In a survey that was started last year and continued into this year, it was reported that the number of wounded rabbits has decreased. Mr. Yamazaki commented that “when you consider the injuries, disease and risk of illness, it was really not very healthy for the rabbits.”

Also, there have been issues in the past with tourists bringing bags crammed full of vegetables for the rabbits, the leftovers of which would attract rats and crows, and rot in the summertime, creating sanitation problems. The Ministry for the Environment reportedly launched a campaign aimed at improving manners among tourists.

Regarding future measures, workshops for citizens and discussions with related organizations are reportedly being considered.

(Find access to this Sankei Shimbun article at this link.)

Chikako Shimada is a Sankei Shimbun reporter based in Hiroshima.