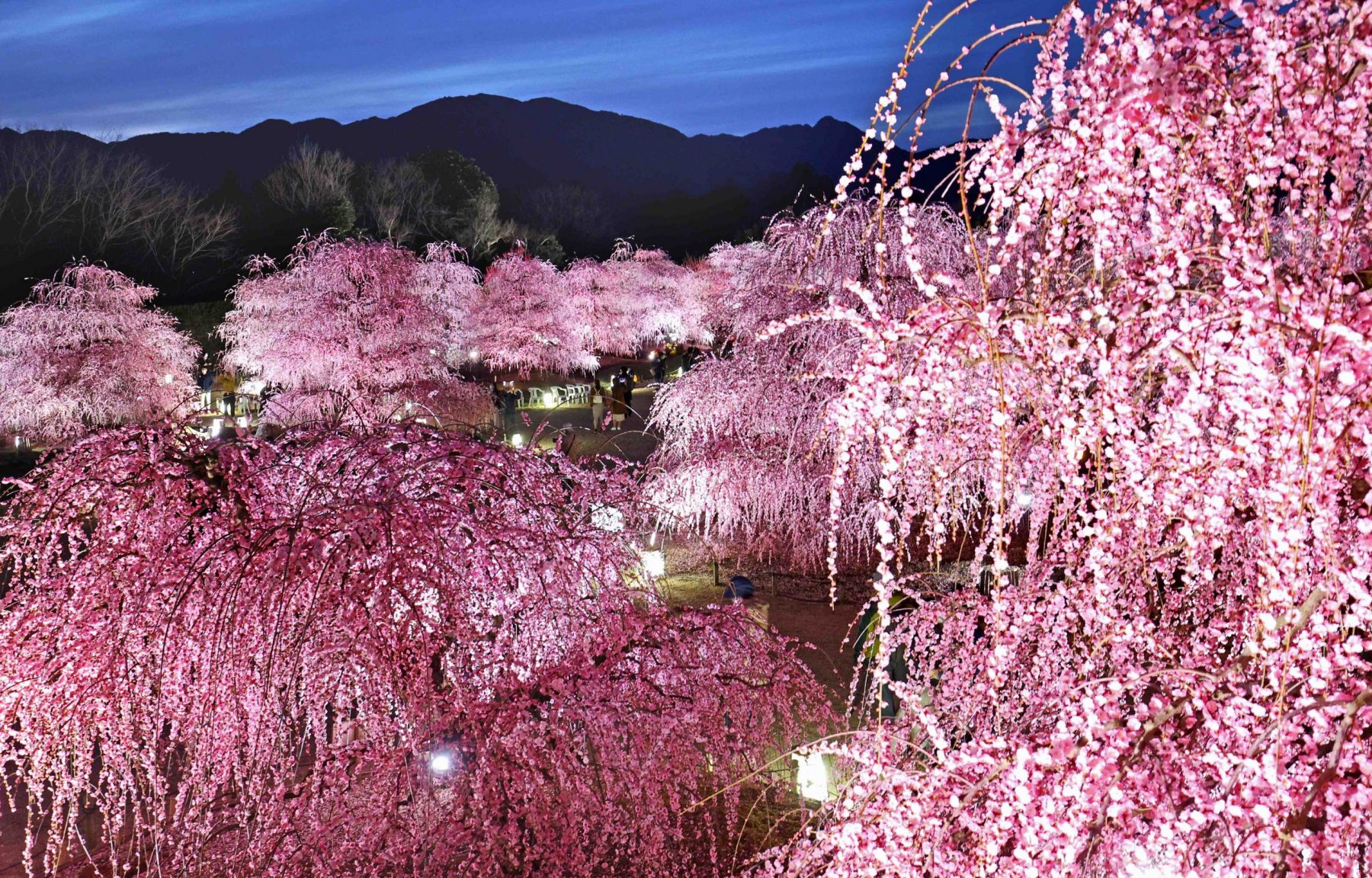 The sour-sweet aroma of plum blossoms can be fully enjoyed even through a face mask. The scenery of weeping plum blossom trees resembling fountains of flowing pink lined up throughout the entire garden astounds.

When lit up after sunset, the trees turn even more elegant.

Designated as a “research and cultivation farm”, The Suzuka Forest Garden in Suzuka City, Mie Prefecture aims to preserve and popularize the skilled techniques of Japanese traditional horticulture, called the “shitate gijustu”. With the double-flowered species, the kureha-shidare (weeping plum from Kureha) at its center, the garden park, which opened in 2014, cultivates approximately 200 weeping plum trees gathered from all over Japan on the site spanning close to 20,000 square meters.

With over 30 varieties, the rarity and beauty of the garden’s plum trees becomes a hot topic among photo enthusiasts who introduce them through SNS and familiarize the public with their beauty.

The garden is opened to the public starting from the end of February for about a month during the plum blossom season. Prior to the coronavirus pandemic, park visitors increased each year, with 77,000 people visiting the garden the year before last.

At the garden, craftsmanship also comes alive. Nowadays, home gardens have become smaller in size, and the numbers of craftsmen who can prune weeping plum trees are decreasing.

“Results can be seen during a month in spring after tending to the trees for 11 months through trial and error. Even we specialists are moved with excitement when seeing the first flowers bloom,” laughs Shigeki Goto, 43, of Masakien, a landscaping company. He continues, “Although I was worried when all the leaves fell off after we had to disinfect them in the summer, it is a valuable platform for research.”

“The fragrance that spreads throughout the garden is nothing like this when you take off your mask,” explains Akatsuka Botanical Garden’s Kazuo Daidai, 42, who oversees Suzuka Forest Garden. Hopefully next year, as we laugh along with family and friends, we can fully experience the garden with our eyes and noses, the aroma of spring and the artistry of master craftsmanship.

(Read the original Sankei photojournalism article in Japanese at this link.)

Kota Kiriyama is a photographer of the Sankei Shimbun Photo Journalism Department.