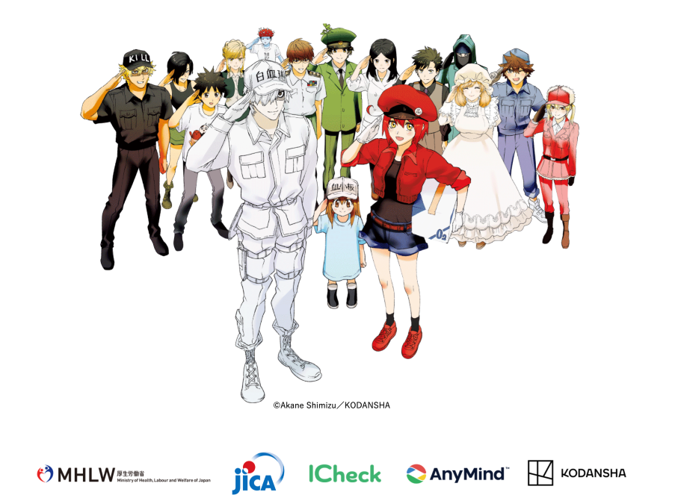 A popular Japanese manga will be streamed online to show how to avoid COVID-19 infections in an easy-to-understand way. Geared for countries like India and other parts of the world where the explosion of COVID-19 cases is not yet under control, the manga teaches the mechanism of infection, and prevention measures like avoiding the Three Cs.

The initiative is a joint project of Japanese publisher Kodansha, which put out the manga series, “Cells at Work!” (Hataraku Saibō), illustrating anthropomorphic cells struggling inside the human body, the Ministry of Health, Labor and Welfare of Japan (MHLW), and with support from JICA (Japan International Cooperation Agency), which helped to translate the manga into Hindi and English.

This month, the new episodes will be distributed free of charge as a motion comic containing voices and sound effects.

Immune cells like white blood cells fight against the COVID-19 virus, which invades through the mucous membrane of the eyes, nose, and mouth and infects one cell after another.

In February, the last of the 6 volumes of “Cells at Work!” which included the “New Coronavirus” chapters, was released. The series sold over 5 million copies and has even been made into an anime.

The manga is popular among young people from elementary school children to those in their 20s, and many parents are fans enjoying it together with their children. The characters that reflect the appearance and function of cells and bacteria, along with the light-hearted jokes and fast-paced battles that the sick or injured cells inside human bodies engage in, are garnering wide support for the manga.

Last October, Yoshiaki Koga, 56, the general manager of the International Rights Division which handles copyrights for manga and other materials at Kodansha, approached the MHLW with a plan to distribute the manga to India and to the world. Koga said that because in India there are many impoverished people living in slums, and wearing masks or washing hands are not customary, he believes “Cells at Work!” could effectively teach people infection preventative measures.

Koga traveled throughout India for four months while he was a university student, and says he was mesmerized by the diversity of race, language, and culture that differed according to each region. With the dream of wanting to “return to India for work”, at Kodansha, he launched COURRiER Japon, a magazine which delivers global news. Koga was later transferred to India, where he was involved in a Japan-India production as chief producer for an Indian remake of the anime, “Star of the Giants” (‘Kyojin no Hoshi’).

Wanting to “contribute to solving social issues in India with Japanese manga”, Koga repeatedly traveled back to India after returning to Japan, always with the aim of starting a business focused on the issues of severe discrimination and poverty, particularly surrounding the independence of women. However last year, due to the pandemic restrictions, he was unable to travel, and in September 2020, a friend who lives in India lost their father to COVID-19.

“Coronavirus has become an imminent threat. Even if we can’t be there, isn’t there something that can be done through manga?”

Koga’s thoughts such as these were the driving force behind the project.

Already popular since its launch, “Cells at Work!” was the perfect vehicle to demonstrate COVID-19 prevention measures. To feature the virus of the pandemic, a dilemma that Japan and the rest of the world are facing, was a wish that the author and editors had in common.

Along with conducting an interview with the MHLW on infection preventive measures, the distribution of a motion comic was proposed. The MHLW readily agreed to the proposal, as they anticipated that together with the Japanese version, a bilingual streaming would allow for a wider understanding of COVID-19 among foreign residents in Japan.

The two newly created episodes that will be distributed free of charge are “Novel Coronavirus” and “Preventing Novel Coronavirus Infection”. The motion comics will contain voices in English and Hindi, along with some sound effects. They will introduce the structure of the virus, along with Japan’s prevention measures, such as washing hands and avoiding the Three Cs. Dr. Satoshi Kutsuna of the National Center for Global Health and Medicine was responsible for supervising both works.

Ahead of worldwide distribution, the Japanese version, which launched on YouTube, has exceeded 1.3 million views since its release at the end of April 2021. Koga said, “Watching the manga, you can understand the complex things that go on inside the body. I hope that, with this easy access, many people will see them.”

Akane Shimizu, the author of “Cells at Work!” also added, “Amid the pandemic, I hope the manga will demonstrate the mechanisms of cells, viruses, and infections in an easy-to-understand manner, and will help to spread accurate knowledge.”

Cells at Work!  Written and illustrated by Akane Shimizu, the manga has been serialized in Kodansha’s magazine, Monthly Shōnen Sirius, since March 2015. The series, published in 16 different countries/regions, has sold a total of over 5 million copies, and the anime has been viewed in approximately 130 countries via video distribution platforms.