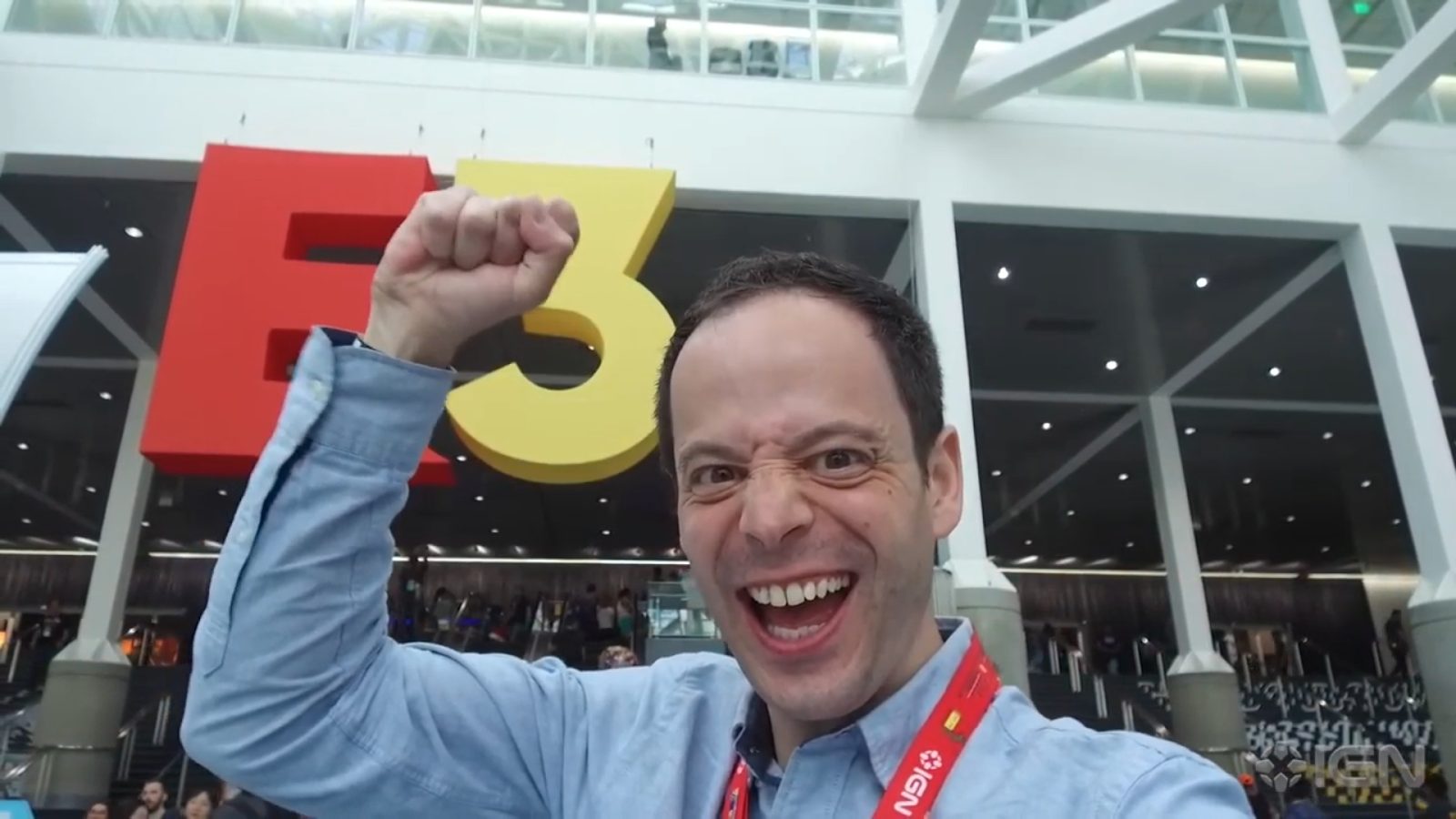 Daniel at E3 2018, back when it was an in-person event in Los Angeles

Usually by this point in June I would be a wreck. June is traditionally the busiest month of the year for videogame news sites such as IGN Japan, because that is when E3 (the Electronic Entertainment Expo) is held. It’s the world’s biggest videogame expo, where all the biggest games leading up to the holiday season are announced.

In a normal year, by now our team would have traveled to Los Angeles and back, reported on hundreds of game announcements, interviewed countless game developers, and delivered a torrent of articles, videos and livestreams. With one team on the ground in LA and another manning the fort back in Tokyo, we would be working around the clock to report on the gamer’s equivalent of Christmas – a Santa’s sack of exciting gaming news.

However, in the face of the COVID-19 pandemic, large-scale in-person expos are not really a thing this year. (Last year’s E3 was canceled outright as the pandemic unfolded.) And so in mid-June, E3 2021 became the first ever fully online version of the storied gaming event.

As such, we were spared the usual insane battlefield conditions of an international excursion and mega-sized convention. Instead, we faced a different sort of challenge – one that came with less jet lag, but also fewer rewards.

E3 itself has undergone all sorts of changes since its foundation in 1995. Especially over the past few years, more and more game publishers have realized that they can reach their audience online with a Nintendo Direct-style video showcase at a fraction of the cost of a presence at a large-scale in-person expo. As such, major players such as PlayStation and Electronic Arts have been skipping the show in recent years, and many wonder whether an old-fashioned convention is still relevant in the digital age.

With the compounding effect of COVID making the on-site show impossible again this year, E3 organizer the Entertainment Software Association had a lot to prove with the all-online E3 2021.

The results were mixed, with stellar showcases from platform-holders Nintendo and Xbox, but rather lacklustre showings from some of the participating publishers.

Square Enix’s strong collection of new games was marred by a slightly confusing presentation and a disastrous surprise release of a demo of Stranger of Paradise: Final Fantasy Origin that simply didn’t work. It required Square Enix to quickly create and release a patch so that frustrated fans could actually play it.

Others such as Ubisoft, Gearbox and Capcom had a paucity of announcements to begin with, while the 2-hour-long showcase by Koch Media was a poorly produced and pretty boring slog.

To be fair, it’s a new world, and some publishers are still figuring out how to pull off high-level presentations and strong product lineups while in many cases working from home. At least they tried.

There were plenty of highlights. Just to name a few:

How We Covered E3

For us in Tokyo, it was an odd week. Everything happened on U.S. time zones, which for us on the other side of the world meant organizing a night shift to cover all of the news in real time. (We usually do that for E3 anyway, so no biggie.)

We produced reaction videos during daytime hours, and held livestreams at 6 PM each evening, so that a domestic audience could tune in and catch up as our team discussed the hits and misses of the day in more detail. We were still working around the clock, as always for E3, but without the benefits of working side by side with our colleagues from around the world by day and networking over American beers and burgers by night.

We did pretty well. Readers were undoubtedly interested – E3 is usually our biggest traffic spike of the year, and this year’s access numbers were similarly high.

But there are so many drawbacks to an all-online event like this. Usually at E3, the showcases by publishers and platform holders take place across the span of a few days before the official E3 expo proper, and then you have three days to go play the various new games on the E3 show floor, interview developers and create content. Without that, it is much more difficult to get our hands on the games and give our impressions of what they feel like to play.

This year we did have a few opportunities to interview developers remotely, and in some cases even play their game demos, but in the majority of cases we could only base our impressions on the trailers and gameplay videos that publishers showed in their public showcases. So essentially the audience gets showered in marketing for a week, and media and influencers are unable to deliver a more filtered and objective response.

We were in a better position than most, because IGN was an official media partner of E3, and we were able to localize the rich coverage by our U.S.-based editorial team for our audience in Japan. But we were limited in what we could produce from scratch.

Still, as media, part of our job is to curate information – and with hundreds of announcements and updates on the latest games within a one-week period, we had plenty of opportunities to do that. In addition to directly covering straight news of as many announcements as we could manage, in real time, we also delivered our specialist impressions of the games that particularly stood out to us, with separate articles and discussion videos on each.

We also ran a special daily version of our regular twice-weekly livestream news show, Real Time News, where we could break down not only the biggest announcements but also those smaller games that caught our attention.

I did have the chance to speak with Jeremy Hinton, the head of Asia Pacific operations for Xbox, to ask about Xbox’s future plans for the Japan market. The Microsoft gaming brand has long struggled in Japan, but it definitely feels like the Xbox brand has a stronger chance in Japan now.

It has enticing new hardware, such as the adorably compact and affordable Xbox Series S, which is ideally suited to Japanese homes. And it’s all-you-can-eat subscription service “Game Pas” and cloud gaming options mean you don’t even need an Xbox to play Xbox games – you can play via the cloud on whatever tablet, phone or other screen you may already own.

Hinton told me that Japan is actually Xbox’s fastest growing market, which was a surprise to hear, and an encouraging one at that. With Xbox’s E3 showcase promising a diverse selection of big and small games for its platform, most of which will be on Game Pass, its lineup of games was the highlight of E3 for me. Perhaps audiences in Japan will start to see the appeal, too.

So anyway, that was E3 2021 – from my perspective in the trenches. I’m so, so ready for in-person events to start happening again.

In September, we will see both indie game expo BitSummit and Japan’s famed mega-expo Tokyo Game Show take place as hybrid events – a series of online showcases for fans, but with an in-person element that allows media and influencers to do the traditional thing of going hands-on with games and talking face-to-face with developers. It sounds like a great solution that will allow us to offer more meaningful coverage while still reaching a global audience online in a safe way.

In the meantime, the good news is that there are a lot of great games coming out between now and the holidays – check out IGN’s E3 coverage to find your new favorite!