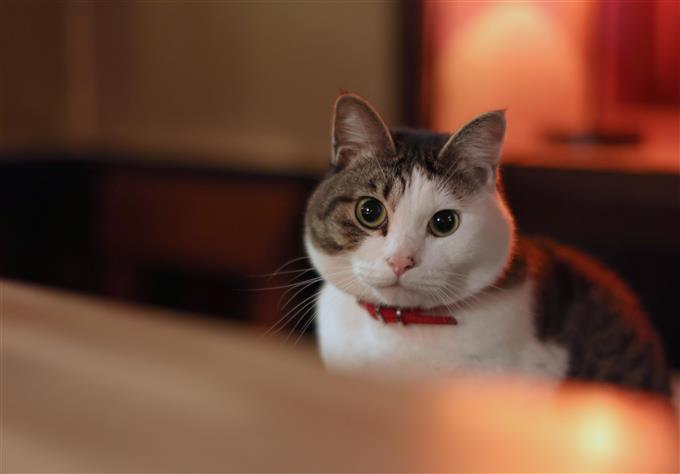 It also happens to be “Takeshima Day”, when Japan commemorates its group of islets occupied by South Korea (aka Liancourt Rocks).  But as a cat photographer for the Sankei Shimbun I would like to talk about the charismatic cat that I met recently, before Japan declared another state of emergency to counter the spread of COVID-19.

I was back in Hakodate for the first time in 30 years. I never dreamed I’d come to that cold city looking for a charismatic pussycat. It is a few minutes walk from the station in the fresh snow of this silver world of Japan’s northernmost island, Hokkaido.

I opened the door of a fashionable bar covered with ivy. At the same time as I heard “welcome,” my eyes met those of its charismatic pussy.

How lucky, I thought. The name of the healthy-looking two-year old female cat is Anko, which commonly means red bean paste in Japanese. Yumi Nakamura, co-owner of the “October-28” bar with her husband, Kaoru, took it in just after it was born.

Kaoru added, “I’m originally a dog fanatic.” In the past, he had a large labrador retriever, and the place had a dog signboard.

However, Kaoru is an affectionate person who welcomes the kitty and cuddles it. Anko-chan loves him, too, and rubs her nose against him.

“To tell the truth, I am passionate about all living creatures. All animals are cute and important,” says Yumi.” Even in the middle of shopping or when I am going for a walk, if I see a cat, I can’t help wondering, ‘does it have enough to eat or a place to sleep’?” she said.

The second floor of the establishment is their home, and they have another cat. But, she adds, “It’s not feeling well now so it isn’t serving customers.”

Forty-five years ago, on October 28, 1975, Kaoru set up shop here. The bar was named after the founding date.

Even after getting married, Yumi explains with a smile: “we have been managing this place as a couple at our own pace without overdoing it too much.” The warm personality of the two people standing at the counter creates the best lounge atmosphere.

What does the barman recommend to the photographer who loves animals but doesn’t drink?

“How about this?”, Kaoru asked. The whisky on the rocks was refreshing in aroma and aftertaste. I was very impressed with his professional advice.

“This is homemade prosciutto” said the owner, grinning as he sliced it expertly with a knife. “I have been making it for about 25 years. I even went to Spain to learn so I could make a genuine product.”

I was impressed by his pride of workmanship. I had repeatedly tasted the real thing at the time of European coverage of the Olympics and the Soccer World Cup, but this was more delicious than any of the others. It went well with whiskey, and was “the ultimate happiness,” so to speak.

When I asked about the sign in the bar which read “Hakodate Racecourse Horse Owner Boardroom A”, I was told that it was the gift of a person who was involved with renovation of the Hakodate racecourse at the time. Kaoru, a horse race  fan, said that every summer in Hakodate, he and his regular customers would go to the race track. Many of the horseracing people would also visit the bar, and I heard the names of famous jockeys and trainers. Knowing the comfort of the counter there, it is not surprising that there were so many regulars.

I count myself among them. The thought of spending some time relaxing in my “favorite bar” 800 kilometers away … I’m motivated to work hard every day just for that.

With the inauguration of the Hokkaido Shinkansen, a new transportation option between Tokyo and Hakodate, it has become easier to get there.

While I was there on assignment, I heard comments here and there about the decrease in the number of foreign tourists due to COVID-19. But we will overcome this difficult time, embrace the new norms of daily life, and continue to explore the charm of Japan and f its cats. At least, that’s what I intend to do.