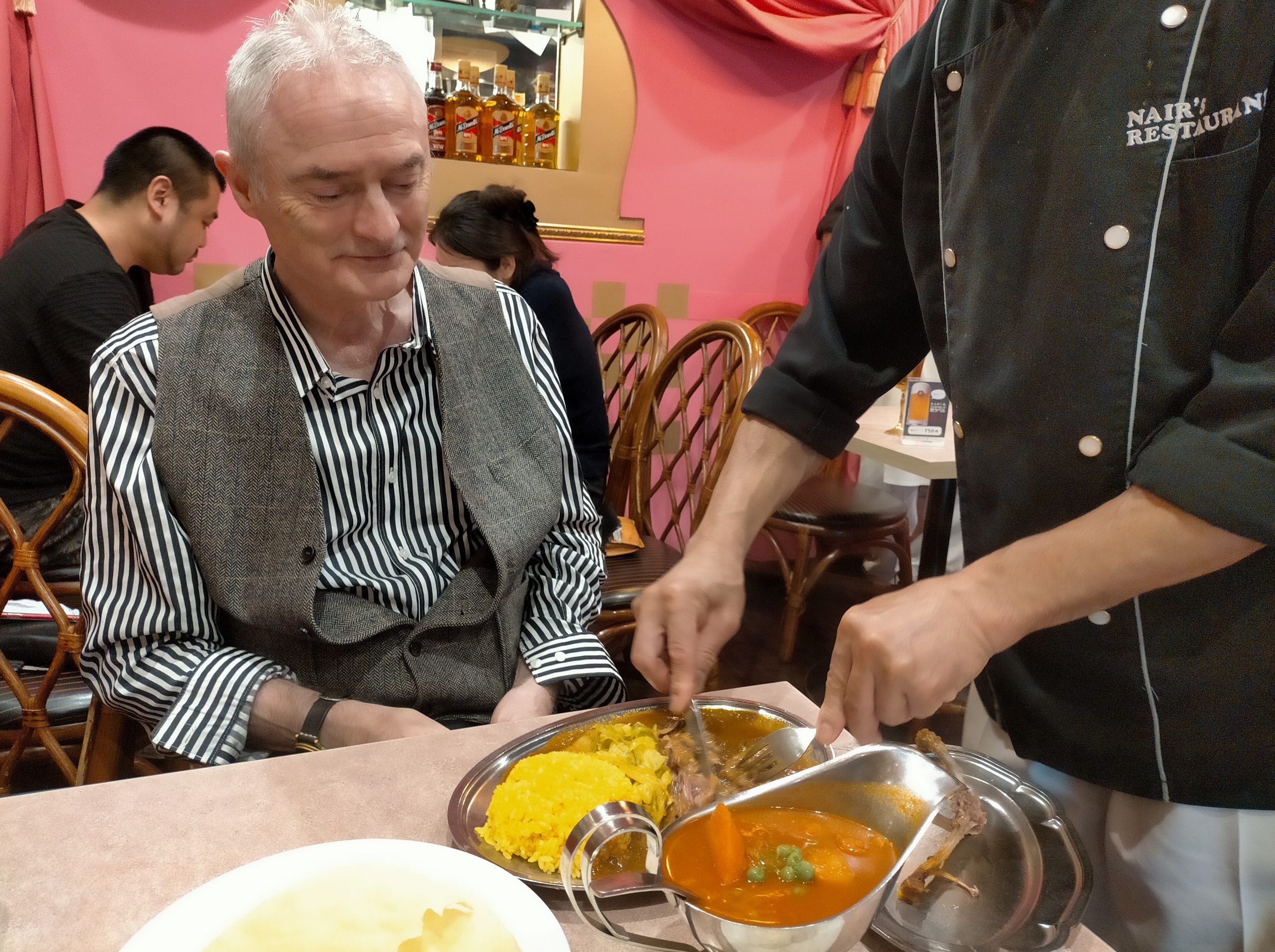 The author is served the teiban lunch at Nair's Restaurant, flavored by an Indian narrative of Japan's history. (Photo by N.W.)

Even during Tokyo’s COVID-induced state of emergency, there was a queue outside Nair’s Indian restaurant in East Ginza. Fortunately, the turnaround at midday is impressively rapid, and I didn’t have to wait long before a table became available.

I ordered the teiban (signature dish) known as Murugi Lunch. Excellent value at Ұ1,500 JPY ($13.50 USD), it consists of a leg of chicken that has been softened by several hours of simmering, together with turmeric rice, cabbage, and mashed potato.

As I spooned up the multi-spiced and highly nutritious concoction, I reflected on how historical narratives differ according to who is doing the narrating.

When it comes to the story of modern Japan, the signature dish was prepared by the Western countries that were on the winning side of the Second World War. Let’s call it the Progressive Club Sandwich.

The Indian take is very different and likely to become more significant as India’s geopolitical footprint grows in line with its economy — which is on track to become the world’s third largest in 2030, according to Japan’s Center for Economic and Business Research. There could be no better symbol of an Indian alternative history of modern Japan than the founder of the restaurant in which I am sitting.

A. M. Nair, who died in 1990, opened his restaurant in the early years of the post-war American occupation. It would be interesting to know what he thought about the G.I.s then strolling around Ginza with their Japanese “pan-pan” good-time girls. It would be equally interesting to know what the American officers and bureaucrats who patronized his restaurant would have thought of their host had they been fully informed of his personal history.

In his memoir, An Indian Freedom Fighter in Japan (Vikas Publishing House, 1986), Nair declares that “my close friends used to whisper, after the war, that for fighting against Britain and encouraging my Japanese friends to do likewise, I should have been booked as War Criminal Number One, and that MacArthur missed out on me.”

Nair does not mention the identity of the friends who made this dark joke, but one of his closest military contacts, War Minister General Seishiro Itagaki, received the death sentence at the Tokyo War Crimes Trials, while another, General Yoshijiro Umezu, died in prison. Nair remained an Indian citizen all his life, but because of the espionage and undercover work he carried out, he was treated by Japan’s top military figures as equivalent to a major-general in rank.

Nair-san, as he was to be familiarly known, was a native of Kerala on the southwest tip of India. He arrived in Japan in 1928 at the age of 23 to study engineering at Kyoto University. Back home, he had already made a nuisance of himself, organizing India’s first school strike and agitating against caste restrictions and the British colonial authorities. Once settled in Japan, he was bowled over by what he saw.

“Here was a country which, in a matter of about a mere half-century, had progressed from a basically feudal set-up to the status of a great economic power…. If Japan could do what she did, why should India at least not be able to break free from its colonial shackles?”

It is a testimony to the seriousness of Japan’s Pan-Asian ambitions that Nair, while still a hard-up student with less than perfect Japanese, was taken up by senior military men. General Yamamoto, commander of a division stationed near Kyoto, treated him “practically like a brother” and introduced him to other members of the elite.

Soon he was lecturing far and wide and finding that his anti-British, pro-independence message was greeted with enthusiasm. As the clash of empires heated up, Nair was invited to Manchukuo (now Manchuria), the puppet state that the Japanese army had set up in 1932.

In the following years, Nair led a kind of Lawrence of Arabia existence, traveling through remote areas of Manchukuo, China, and Mongolia, doing his best to damage British interests and promote Japanese influence. He disguised himself as a camel dealer, Moslem mullah, and Tibetan “living Buddha.” Among other adventures, he foiled a British intelligence agent’s plan to map out a route to India across the Himalayas by setting ablaze the entire fuel supply for his vehicles.

When war broke out, Nair became the liaison officer of his mentor and fellow Japan-resident Rash Behari Bose, who led two important Japan-backed organizations, the Indian Independence League and the Indian National Army. In his memoir, Nair makes it clear that he considers that the work of R.B. Bose has been unfairly minimized and the contributions of the more famous Subhas Chandra Bose, who took over leadership of the I.L.I. and I.N.A.in 1943, has been greatly inflated.

In contemporary India, Subhas’s stature appears to have increased, with Prime Minister Narendra Modi celebrating the 125th anniversary of his birth with a visit to his hometown earlier in 2021. There was even a series on Amazon Prime, The Forgotten Army, giving a glossy, heavily fictionalized account of the I.N.A.’s disastrous attempt to invade British India from Burma.

Nair is much less impressed. While esteeming Subhas’s charisma and patriotism, he slams his lack of realism and his dictatorial tendencies.

Yet, as Nair notes, the I.N.A. indirectly helped to usher in independence. When the British Indian authorities attempted to try former members of the rebel army for treason, a storm of protest broke out nationwide and the Indian component of the Navy mutinied in Bombay. For British India, the writing was on the wall.

Nair chose to stay in Japan after the war, acting on several occasions as interpreter for Dr. R.B. Pal, the only judge at the Tokyo War Crimes Trials to find all “A-Class” (political) defendants innocent. Nair quotes Pal’s stinging counter to allegations of Japanese conspiracy to wage war: “Many powerful nations are living this sort of life, and if these acts are criminal, then the entire international community is living a criminal life.”

India was not one of the 49 nations that signed the U.S.-Japan Peace Treaty in 1951. Nair had secured the unpublished text of the simultaneously effected U.S.-Japan Security Pact and brought it to the attention of Jawaharlal Nehru, India’s first prime minister. In the Indian view, making the peace treaty conditional on the security pact violated Japanese sovereignty. Instead, Nehru concluded a separate Bilateral Treaty of Perpetual Peace and Amity with Japan.

Nair was not an uncritical admirer of Japan. He deplored brutal behavior in China, the degradation of Korean and Japanese women in the red light districts of Manchukuo, and the inability to learn from mistakes. But he saw Japan’s “Asia for the Asians” drive as the key to Indian independence — and in that he was right.

Over time, Nair’s anti-British animus appears to have abated. In 1974, he and his Japanese wife Hindu attended a reception for Queen Elizabeth and the Duke of Edinburgh in Shinjuku Gardens.

In his later years, he visited India regularly and seemed disappointed by the limited improvement in people’s lives. One wonders what he would have made of the much more dynamic India of today — and of modern Britain with four politicians of Indian subcontinental descent in Boris Johnson’s Cabinet and one of Pakistani descent.

The Progressive Club Sandwich, with its assumption of Western moral superiority and Japanese backwardness, is still a popular comfort food. It has a long history, beginning with the “opening” of Japan by Commodore Perry’s gunboats in the 1850s, and its influence can be found today in innumerable op-eds, books, and academic papers.