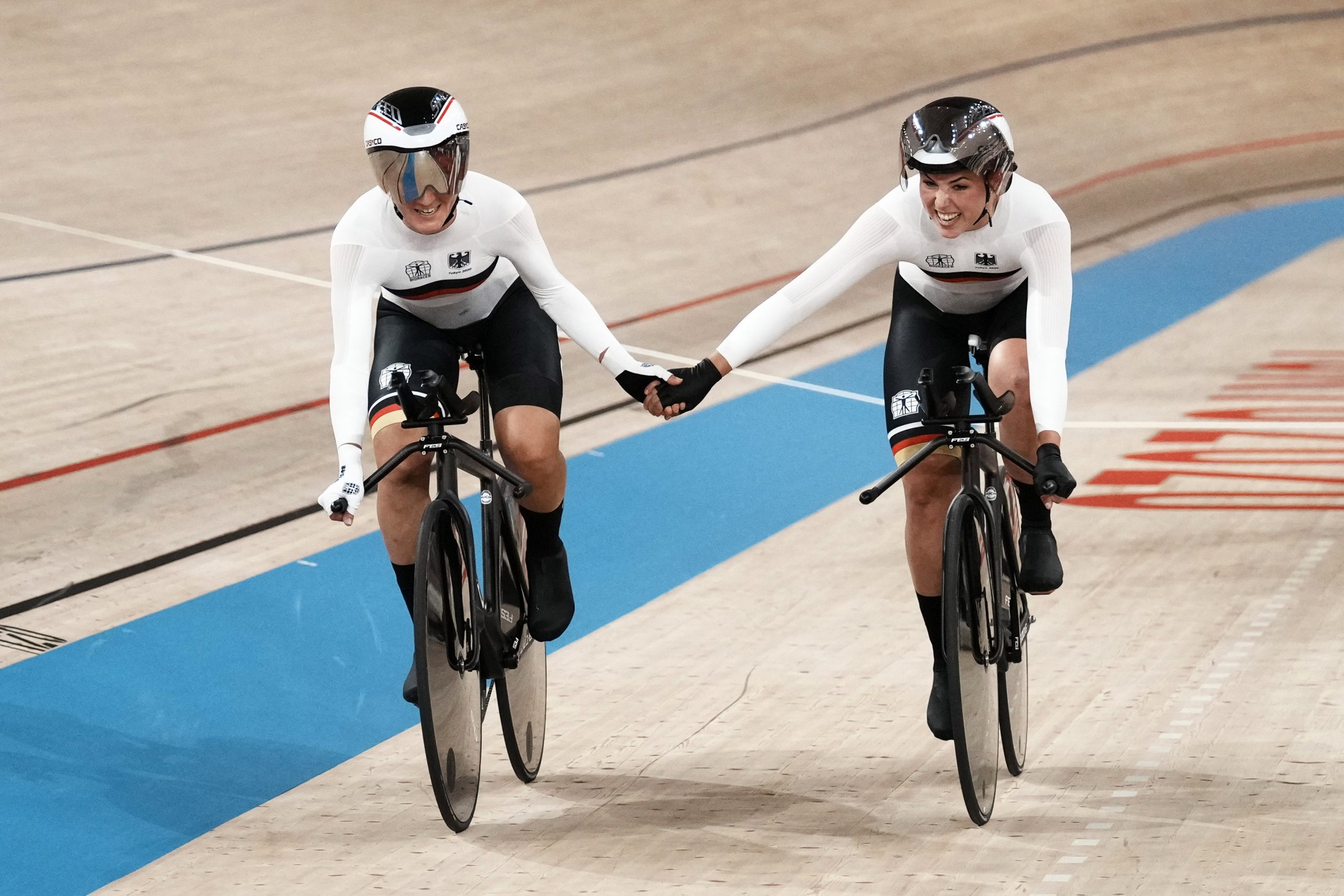 Lisa Brennauer (left) and Lisa Klein of Team Germany celebrate a world record as they win gold in the track cycling women's team pursuit at the 2020 Summer Olympics on August 3 in Izu, Shizuoka Prefecture. (AP/Thibault Camus)

Those records were perhaps overshadowed by confusion that ensued from a crash between Great Britain and Denmark in the first round of the men’s race and debate about who would move on to the gold-medal race the next day.

The crash occurred in the last lap of the first round of the men’s race, when Denmark’s Frederik Rodenberg Madsen ran into Great Britain’s Charlie Tanfield as he was trying to catch up with Tanfield, the replacement for Edward Clancy, who had unexpectedly retired due to a back injury aggravated during the qualifying round at the Izu Velodrome in Shizuoka.

Had Madsen officially caught up to Tanfield, his team would have immediately won the race. Due to the crash, Denmark did not finish the race, while Tanfield got back on his bike and finished. “Our riders always do the last kilometer looking down, following the line,” Madsen said was the reason for the crash, according to Reuters.

Ultimately, officials determined that Denmark had caught up to Great Britain, giving it the win and letting it move on to the gold-medal race against Italy on August 4. Great Britain will be in the race for seventh and eighth place against Switzerland, which was decided based on the time that Tanfield and his team ended up finishing the race after the crash.

Tensions were already high between the two teams as Great Britain, among other teams, had been calling for Denmark’s disqualification for using illegal equipment, such as improperly registered vests and tape on riders’ shins, during the qualification round.

Denmark will be challenging the team that broke the world record set by Danish cyclists in Berlin, Germany, last year.

In the women’s event, Germany’s Franziska Brausse, Lisa Brennauer, Lisa Klein, and Mieke Kroeger set a world record during the first round, recording a time of 4:06.159, and then topped the record again in the final round (4:04.242) against Great Britain. The United States won the bronze medal.

Great Britain won gold in 2012 and 2016, and was the defending champion. “We had respect for them,” said Brennauer after the race, according to The Associated Press, “but we were focused on our race.”

The men’s team sprint race was also held at the Izu Velodrome. The Netherlands took gold, setting an Olympic record, 41.369 seconds in the 750-meter race, in the process. Great Britain and France earned silver and bronze, respectively.