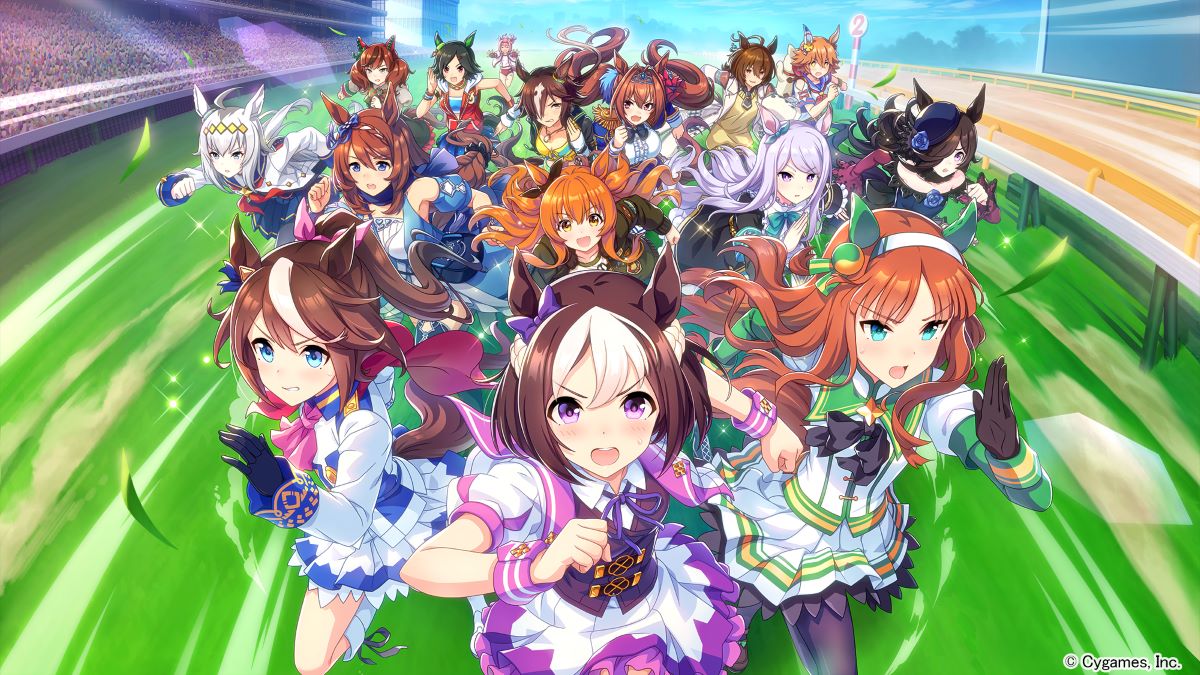 Released in February this year, Umamusume’s game app has racked up more than 11 million downloads as of the end of October 2021. Propelled additionally by its related anime and comic that were released prior to the game, the franchise has captivated numerous celebrities, and even prompted donations to real-world retired horses.

And the game’s rising popularity shows no signs of slowing down! Recently, we decided to explore the appeal of the hit franchise that has garnered interest from both horse racing enthusiasts and anime fans.

Even Ma-Kun’s Caught the Bug

In scenes from Umamusume, horse girls with iconic perky ears and wagging tails—features that differentiate them from ordinary human beings in their world—race the turf in unique, vibrant outfits.

In the game, players train their racehorse characters using a variety of techniques to win G1 races, such as the Japanese Derby and the Arima Kinen. Characters include famous racehorses, such as Special Week (1995-2018), who brought jockey Yutaka Take his first Japanese Derby victory, as well as the legendary Silence Suzuka (1994-1998).

The franchise, developed by Cygames, based in Tokyo’s Shibuya Ward, released its anime’s first and second seasons in April 2018 and January 2021 respectively. The mobile game release followed shortly after in late February 2021. Due to the game’s enormously positive reception, by the end of October 2021, Umamusume had already reached over 11 million downloads. In addition to its anime, comic, and game, the franchise has even held musical events and other functions as well.

Among its many players, countless celebrities have also helped bring the game under spotlight. To offer examples, former Major League Baseball star Masahiro Tanaka (Ma-Kun), who now pitches for the Rakuten Eagles, and TV personality Shoko Nakagawa are two of several notable figures who have shared their Umamusume progress on social media.

A representative from Cygames said, “It was difficult trying to figure out how to pay homage to the sport, while at the same time convey the appeal of horse racing—and horse racing games—to as many people as possible.”

Looking at the franchise’s resulting popularity, their efforts certainly paid off. What really helped increase its fandom was, while the anime faithfully recreates episodes of historic races, the game adds “what-if” stories—scenarios that answer the question, “What if that famous horse had achieved this?” These hypotheticals stir players’ imaginations and capture their hearts as they reproduce famous races in fictional situations.

On the reality side, the anime’s second season faithfully adapts the miraculous story of protagonist Tokai Teio (1988-2013), recreating the racehorse’s historic triumph in the Arima Kinen race immediately after returning from a one-year hiatus.

This attention to detail is not limited to race results either. The franchise even took the extra step to replicate the famous banter between Yukio Okabe, former jockey of Tokai Teio, and Yutaka Take, the jockey of Mejiro McQueen (1987-2006), which was a renowned stayer (a horse known for its  performance on long-distance tracks) that won three G1 races extending over 3,000 meters. This level of detail is one of the reasons the anime has become a favorite among horse racing enthusiasts.

In the realm of “what-could-have-been” alternate outcomes, the anime’s first season rewrites the tragic conclusion to Silence Suzuka’s career. While history records the horse’s untimely euthanasia after an injury during the Tenno Sho (Autumn) race was deemed untreatable, the anime imagines a fictional plot in which Silence Suzuka, with the support of Special Week and other horse girls, makes a comeback and trains towards racing in the United States.

According to Mitsunobu Uwatoko, editor-in-chief of Famitsu Mobile Game Hakusho 2021, a white paper which conducts surveys and research on games, “The more people are interested in horse racing, the more they appreciate Umamusume.”

He went on to speculate, “The amount of care and attention to detail that went into creating the game may be the reason why it went viral.”


A Surge in Donations for Retired Horses

Aside from gameplay, the franchise’s popularity has also manifested in unexpected ways. Umamusume features a popular side character, Nice Nature (1988~), who placed third in the Arima Kinen three years in a row. Since 2017, and prior to the franchise’s release, the Japanese incorporated non-profit Retired Horse Association has been hosting crowdfunding each year on Nice Nature’s birthday to support retired racehorses. In an average year, the association normally receives about ¥1 million JPY (roughly $8,800 USD) through its crowdfunding; this year, however, the association reportedly collected an astounding total of ¥36 million JPY ($317,000 USD)!

Comments on the crowdfunding page include such messages as, “I found out about the association through Umamusume,” and, “I recently became a fan, even though I didn’t know about the racehorses when they were still actively racing.”

Kyoko Numata, chairperson of the Retired Horse Association happily said, “The [donations] this year were of such phenomenal magnitude, far greater than we’ve seen before. I’m so glad that people are talking about retired horses. It gives impetus to a massive interest in racehorses.”

According to gameage R&I, a research firm specializing in video games, the Umamusume franchise is most highly rated by players for the “training” mechanic featured in the game.

Training a competitive character means carefully balancing five key attributes: speed, stamina, power, grit, and intelligence. Failing this task means facing defeat not only in races against other players, but possibly even in solo-mode story races. However, the game is also sprinkled with “encounters” that can offer lucky players some extra support, giving each playthrough a touch of addicting randomness.

Interestingly, gameage R&I also found that about forty percent of Umamusume players are men in their 20s, and that the average playing time is over two hours, which is unusually high for a mobile game—a genre in which people tend to only play in short spurts during idle time.

“I never imagined it would be this popular. The game has many elements that are great for self-imposed challenges, which gives it an appeal unlike any other mobile game. With its high level of perfection, I wouldn’t be surprised if it becomes a national pastime.”