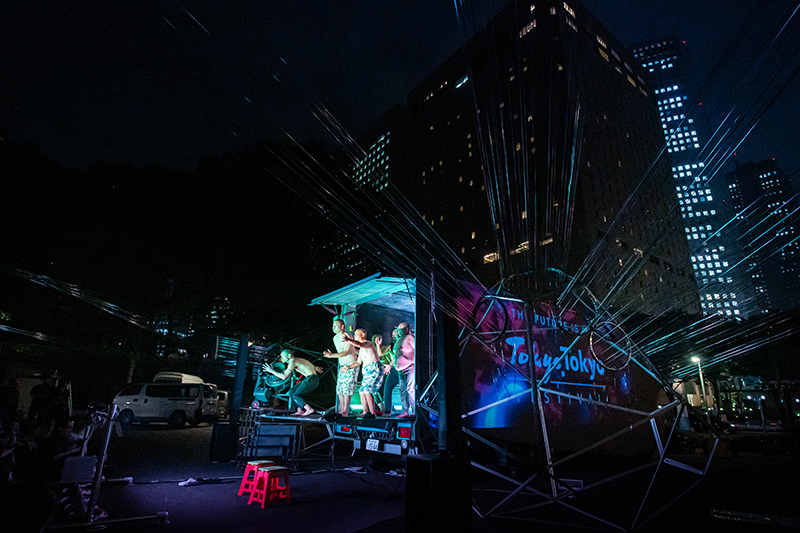 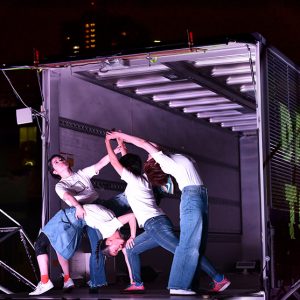 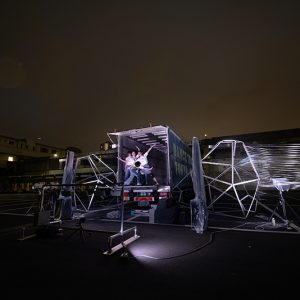 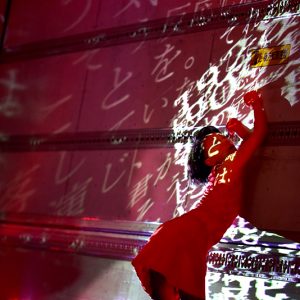 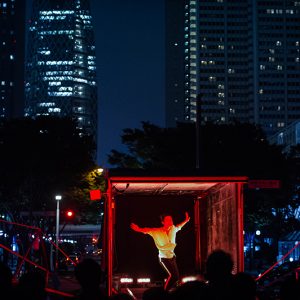 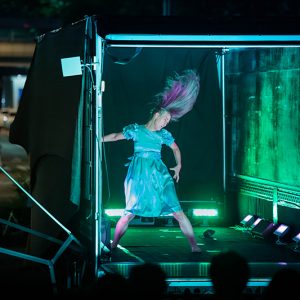 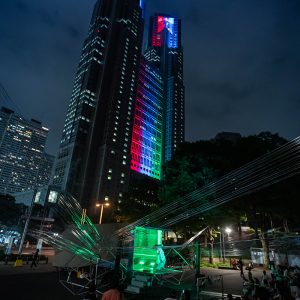 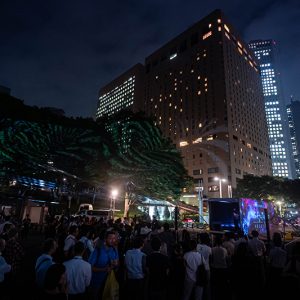 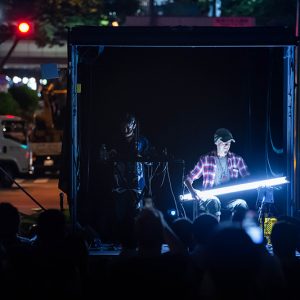 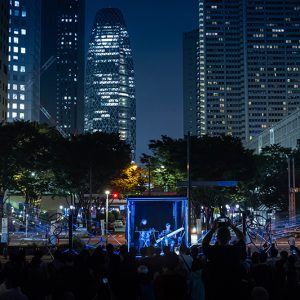 We are standing in Adachi, Tokyo, in a space normally used as a parking lot of a large fish market.

Today, the space has a different purpose. “DANCE TRUCK TOKYO”, an iterating truck which turns into a stage, is sitting in the space, set to deliver a unique public performance for the local community.

The truck is set to travel to 15 different places all around the Tokyo Metropolitan Area between 2019 and 2020, showcasing the performing arts in a wide variety of communities – all completely for free.

The group had just started its tour when we caught up with performer and one of the curators Yoko Higashino and producer Matsue Okazaki. Their excitement was palpable. As Okazaki explained:

“We never thought we would get to this point, but we will perform even on an island. We are lucky to be performing on a truck. We wanted to create an opportunity for many different people to experience dance.”

The Beginnings in Portland

What prompted the idea of using a truck as the stage in the first place?

Okazaki explained to us that the start goes all the way back to 2011, when Okazaki and Higashino both attended the Time-Based Art Festival (TBA) in Portland, hosted by the Portland Institute of Contemporary Art.

It was in this dynamic festival environment that they first encountered the concept of the Dance Truck, founded by a group from Atlanta.

Higashino is now curator of DANCE TRUCK TOKYO, but she herself also performs as a dancer. It was in that capacity that she participated in the TBA festival. When in Portland, she was asked whether she wanted to take part in a local performance, which happened to be on a truck.

“It was our first time for that kind of experience. We were like ‘wait, is the back opening ［of the truck］?!’” Okazaki said, laughing, then continued: “Either way, Higashino’s performance led to a standing ovation.”

The unexpected success led the two women to contemplate bringing the concept to Japan. Okazaki mused, “There is perhaps something to be said about the Japanese fitting well into a small environment.”

Okazaki pressed the point that the Japanese sensibility provides something unique to offer in the dance truck format. “It’s not purely about making something of the small environment, but it’s more to do with the fact that I think Japanese can extrapolate a holistic feeling from the space. It was then that we first thought, ’we should do this in Japan.’”

The two established the Japan Dance Truck Association the following year, pioneering the concept in Japan.

Their next step was to adapt the concept to Japan. Okazaki explained how they adapted what they had seen in the U.S., using trial and error to come up with features for the truck that work well in Japan.

In fitting with Japan’s big strides in the field of technology, the team aimed for state of the art sound and lighting technology.

The day we attended there were silver strings stretched all around the truck, blowing harmoniously in the light September wind. Original project mapping by creator Yohei Saito was reflected onto the side of the truck. With the surrounding background and silver strings, it caused a spacey-shimmering aesthetic.

Excited to talk about the effect, Higashino explained how they wanted to give the impression of “something emanating from the back of the truck.”

Higashino also elaborated on the importance of making the visuals around the truck interesting. They collaborate with artists for the setup, for example. “By just using a truck, it’s just a truck isn’t it? So we always try to think: ‘How can we combine different things?’” she said.

Another factor that DANCE TRUCK TOKYO wished to bring to the fore was the surrounding Japanese environment. Okazaki elaborated: “The truck is open, but the actual opening is quite small. So we want people to watch the dance, but also enjoy the city and background scenery behind them.”

To top it all off, the traveling DANCE TRUCK TOKYO performances are achieved with a small carbon footprint compared to regular theaters. “We can operate a stage just by using between 4 to 6 electric outlets, which we borrow from regular surrounding buildings. It would be impossible with a normal stage,” she added.

Quite apart from the technical side, the two talented artists and entrepreneurs seek to show the breadth and depth of what Japan has to offer through the content of the performances themselves: dance, songs, plays, musical concerts, even Japanese comedy known as owarai.

“In the future we are also considering bringing in elements of Japanese traditional performing arts” explained Higashino, signaling the direction of their growth.

At the same time, the organizers have kept in mind that all of this started from wanting to share more widely the art of contemporary dance. In fact, the first half of the show on the day we visited was a tribute to Japanese contemporary dance.

Some performances included creative artist interaction or a block of cement as a prop for strength, and other related routines. With a narrator in the backgroung, Higashino herself danced in a futuristic setting surrounded by cobweb-like props, which infused with projections, created an almost haunting atmosphere.

Though the show is completely free and open to everyone, the performers are all professionals selected by the curators. In fact, 45 groups auditioned in late September for the 2020 tour.

When asked what are the selection criteria, Higashino explained the importance of choosing people who have new ideas. The curator also put a lot of emphasis on understanding the performance space on a purely practical level, taking into consideration that the light, the size of the truck and the length of the performance are not the same as the ones for a normal stage.

“If you don’t think of these things, it’s quite difficult to create a strong performance, because you don’t have a lot of freedom”, concluded Higashino.

Bringing Dance to Everyone

One key aspect that stood out throughout the interview was the group’s drive to make performing arts as accessible to the layman as possible. The two innovators are uniquely situated to deliver.

The choice of locations reflects this spirit as well. Okazaki explained that they wanted somewhere in Tokyo which “which was connected to the regular life of people.”

The producer was adamant that DANCE TRUCK TOKYO has managed to achieve this unique brand with the help of many. “It’s not just the place, it’s also thanks to the collaboration with the Tokyo Metropolitan Government and with the people on the ground.”

“DANCE TRUCK TOKYO is performed in a public place, where someone [in the audience] might be seeing contemporary dance for the first and last time. So we want to perform something at a high level… We are showing something relatively niche which is contemporary dance, and Japanese contemporary dance isn’t very much known abroad, we want people to see it,” explained Okazaki enthusiastically.

The group also dares to dream big by pushing on the versatility of the truck as a stage, which can bring performing arts everywhere and to everyone.

“The truck of course has the characteristic that we can move it, and it uses the concept of taking the road and using it as a stage. I think it could be used in [other parts of] Asia as well, even places that don’t have stages, as a place to perform,” Okazaki said.

“A performer can’t just be on a stage, it’s not enough!” Okazaki exclaimed finally.

People will always come to see the passion performers put on the stage, but to reach everyone, sometimes performers must go to the people instead.

(This article is published in cooperation with the TOKYO METROPOLITAN GOVERNMENT.)