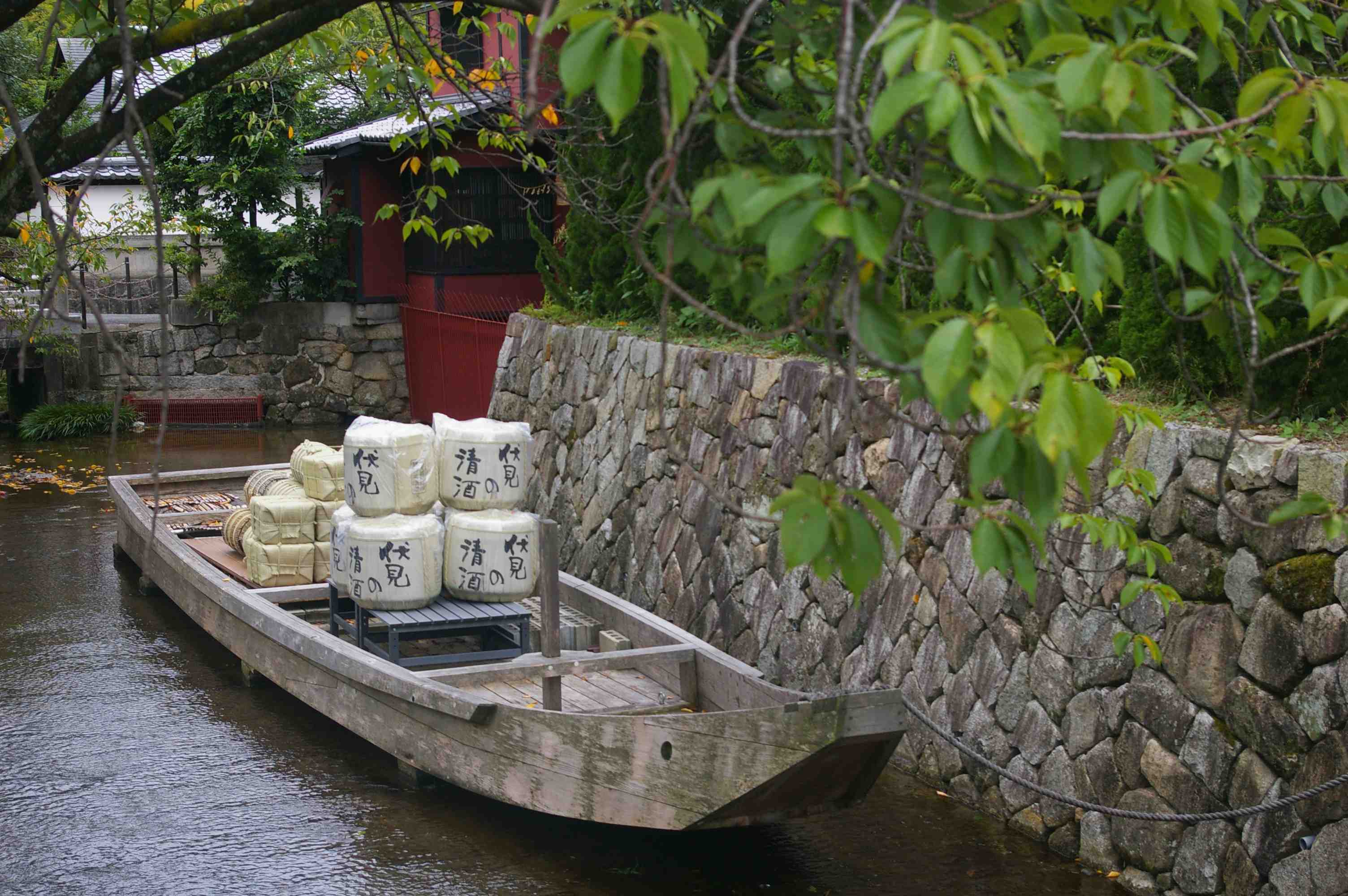 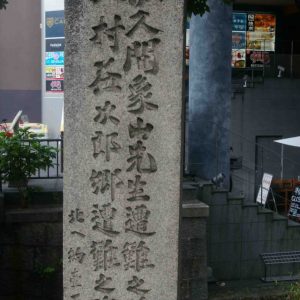 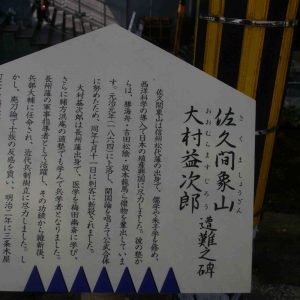 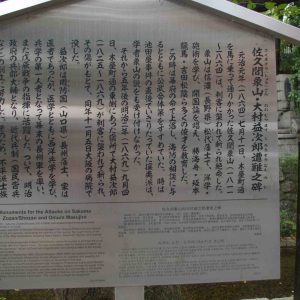 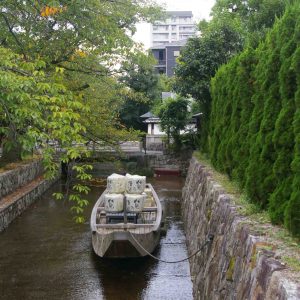 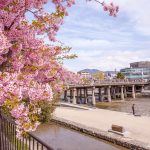 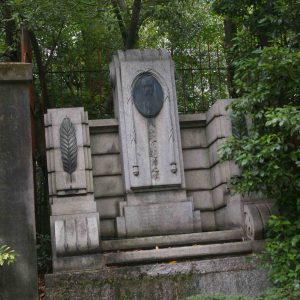 In the decades leading up to the Meiji Restoration of 1868, sonno joi (revere the Emperor, expel the barbarians) activists and shogunate adherents, such as members of the Shinsengumi, engaged in a shadow war of assassination. Many of the bloody incidents took place in Kyoto.

The city was a magnet for advocates of the restoration of direct imperial rule as it was where the Emperor resided.

Sanjo Ohashi: Where It All Begins

Walk just a few minutes west from the Sanjo Ohashi bridge over the Kamo River — the starting point of the famous Tokaido highway on the Kyoto end — and you will find the Takase River. Really a canal rather than a river, it was used during the Edo period for transport of goods in central Kyoto.

Nowadays, the street parallel to it provides one of the most delightful promenades in the ancient capital, especially when cherry blossoms are in full bloom.

At the northeast corner of the small bridge where Sanjo crosses the Takase stands a stone pillar and plaque commemorating the fact that, very close to this spot, two of the most interesting players in the restoration drama fell to the swords of assassins. The amazing part is that the attacks occurred five years apart.

Sakuma Shozan (or Zozan) (1811-1864) was the samurai son of the secretary of the Matsushiro clan in what is today Nagano Prefecture. First immersing himself in Chinese learning, he was shocked by the ease with which the British humbled the great Qing Empire in the First Opium War. Shozan then turned to the study of Dutch learning (rangaku) in order to discover the secrets of Western power and devise strategies for upgrading Japan’s outdated defenses. The result was his influential work, Kaibo Hassaku (Eight Measures for Naval Defense).

However, this polymath also learned how to make glass, magnets, thermometers, a camera, a telescope, electric batteries, a seismograph, and even Japan’s first telegraph. He was also a skilled ink painter.

His writings about the urgent need for Japan to meet the challenge from the West attracted attention both within and outside the shogunate. The private school he founded in Edo attracted several individuals who were to play key roles in the restoration drama, including Yoshida Shoin, who in turn was the ideological mentor to many of the leaders of the Meiji government, Katsu Kaishu and Sakamoto Ryoma.

Upon discovery of the plan for Yoshida and some of Shozan’s other disciples to stow away on one of Commodore Perry’s “black ships” so as to be able to travel to the West and observe developments there at first hand, Shozan was placed under house arrest for nine years.

After his release, Shozan became an outspoken proponent of opening up Japan’s ports to foreign traders and pursuing a crash program of modernization. It was a position that certainly did not endear him to violently anti-foreign shishi (fervent supporters of the Emperor and Japanese exceptionalism).

He formulated the phrase “Eastern ethics, Western technique” that was to become the battle cry for modernization in Japan.

In July 1864, despite the obvious danger, Shozan and a few followers journeyed to Kyoto to try to win support within the imperial court for an “open door” policy. While in the capital, Shozan hardly sought to remain inconspicuous as he was mounted on a white horse with Western saddle.

As he sped ahead of his companions, he was suddenly set upon by a group of swordsmen and butchered in broad daylight. The following day, they put up a sign at the main gate of Gion Shrine enumerating Shozan’s “crimes.” They also put his head on display on the banks of the Kamo River at Sanjo. 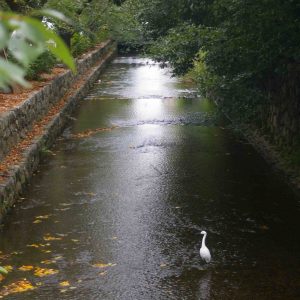 The Takase River, near the site of historic Meiji Restoration era assassinations of Sakuma Shozan and Omura Masujiro 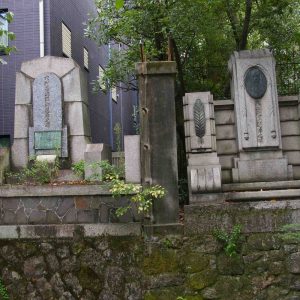 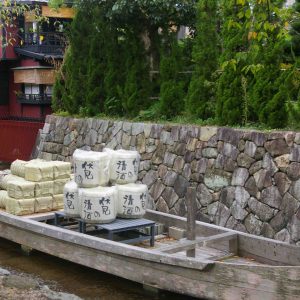 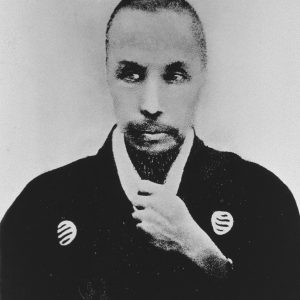 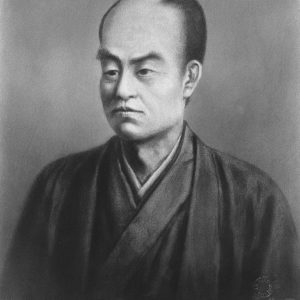 The second remarkable man to meet an undeserved fate near Sanjo Ohashi was Omura Masujiro (1825-1869).

Ironically, for the man who is considered the founder of Japan’s modern military, Omura was not born a samurai. He was the son of a local village doctor in the Choshu feudal domain (today’s Yamaguchi Prefecture).

Like Shozan, Omura developed an interest in “Dutch studies” and military tactics. He became an advisor to more than one clan, and even a professor at the shogunate’s military academy. He also studied modern Western medicine under the German physician Philipp Franz von Siebold in Nagasaki, and English from the American missionary James Curtis Hepburn in Yokohama.

Along the way he attained samurai status, and became the brains behind the reform of military forces in Choshu, equipping units with modern weapons and opening their ranks to commoners. The latter policy caused bitter resentment among conservative Choshu samurai. The changes he championed allowed Choshu to rout shogunate forces during the second Choshu Expedition in 1866 and paved the way for the restoration of imperial rule.

After the Meiji Restoration, as vice minister of war, he took charge of creating a modern Western army, which sounded the death knell of the samurai. He also forcefully argued for the elimination of feudal fiefs and clan armies. That issue later tore apart the Meiji leadership, as men like Saigo Takamori could not stomach the destruction of their class, along with their economic and social privileges.

Omura had zealously studied the campaigns of Napoleon and he modeled the new Japanese army on the French. The navy looked to emulate the British Royal Navy. He had far more faith in a repeating rifle than an exquisitely crafted sword and thought that Japan should be open-minded to anything that made it stronger.

On September 4, 1869, during a trip to the Kansai region to scout for locations of future military schools, Omura and several associates were staying at an inn next to the Takase River. While they were having dinner, eight former samurai, mostly from Choshu, charged in and attacked.

Two of his companions died on the spot, and Omura only survived by hiding in a bath filled with dirty water. Although he was rushed to Osaka to be treated by a Dutch doctor, he died from his wounds on December 7.

Yet Omura’s legacy could not be so easily extinguished. Followers like Yamagata Aritomo and Saigo Tsugumichi pushed through universal conscription and organized the core of the modern Imperial Japanese Army.

Three decades later, this army would stun the world with its defeat of the largest army in the West — that of the Czarist Empire.

Incidentally, the Takase River has given its name to one of the most famous short stories of the Meiji era, “Takasebune” (The Takase Boat) by Mori Ogai.

In the Edo period, criminals condemned to be exiled to poor, distant islands were sent by small boat to Osaka, where they would take a ship. Ogai’s moving story, strangely reminiscent of John Steinbeck’s Of Mice and Men, tells the tale of a man who has been convicted of killing his own brother and the sympathetic custodian accompanying him on the first stage of his journey.

After reading it, you’ll never forget the Takase River.