Despite Uncertainties, 2021 Offers a Chance for Rejuvenation 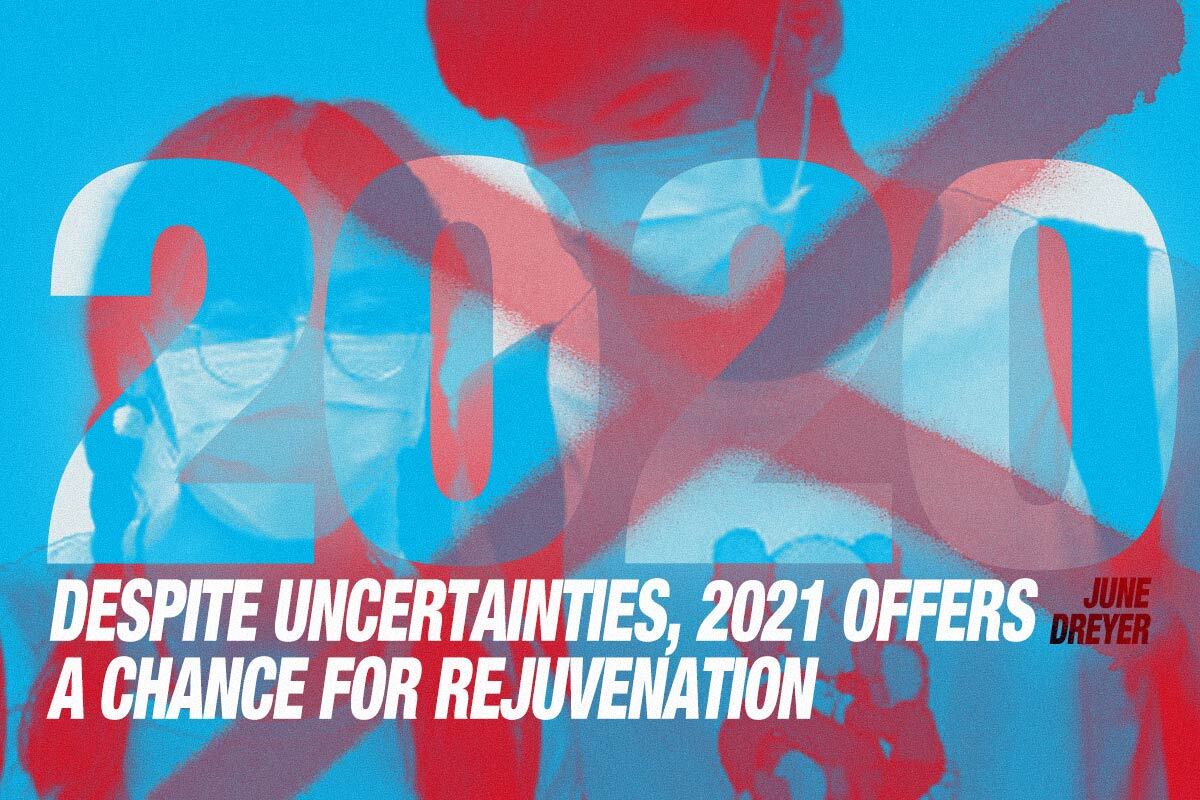 After all the gifts have been exchanged and the wrappings folded away, it’s time to take stock of 2020.

Very few will look back on it with nostalgia. A Time magazine cover read “2020” in black type set against a black background, crossed out with a blood-red X. Below, in separate lines as if to stress the import of each word, were four words: “the” “worst” “year ever.”

In Japan, the top vote getter for kanji of the year was mitsu, symbolizing the san mitsu, the three avoids or three Cs: stay away from confined spaces with poor ventilation, crowded places with many people nearby, and close contact settings such as conversations at close range. In keeping with tradition, the chief priest of Kiyomizudera temple ceremoniously painted the kanji on traditional washi paper, the elegance of his calligraphy only adding to the poignance of the occasion.

The runner-up to mitsu, garnering 13,655 votes as opposed to mitsu’s 28,401, was no better—ka, meaning epidemic, evil, and misfortune, with yamai, illness in third place. A cartoon in one Japanese newspaper showed an ailing, bearded 2020 on crutches admonishing a tiny wide-eyed 2021 to be sure to take his anti-anxiety meds.

The eagerly-awaited annual year in review by humorist Dave Barry began by announcing that insofar as he knew, no one got killed by murder hornets, adding “that’s pretty much it.”

Nor does the beginning of 2021 portend a fresh start. From Britain came news that the coronavirus had mutated, prompting France to first close its borders with Britain and then reverse itself as long lines of trucks carrying needed commodities backed up for miles, fraying the nerves of their drivers, consumers, and politicians fretting about how to balance the competing needs of energizing the economy while preventing the spread of the disease.

In response to a continued rise in cases in Japan, the central government also closed the country’s borders to foreign nationals, with returning residents needing to quarantine for 14 days. There is continuing uncertainty over whether the Tokyo Olympics and Paralympics can take place. Other uncertainties abound.

Among other problems, as the 10th anniversary of the triple disaster in Tohoku approaches, 40,000 evacuees remain displaced. In Hong Kong, Legislative Council elections, postponed for a year allegedly because of the pandemicーwhich was actually well under control thereーmay or not be held, depending on Beijing’s decision. Xi Jinping, though not democracy advocates, need have no concerns, since regulations passed over the past several months will exclude anyone but the most closeted dissidents from running.

North Korea has been curiously quiet for several months, arousing concerns that Supreme Leader Kim Jong Un may be planning to test yet another nuclear weapon. In the United States, an experienced but as yet untested leader assumes the presidency after a close election whose results remain contested by supporters of the losing party.

Moving away from elite politics to the concerns that most citizens really care about, there are issues like how much their children will have learned, or not learned, from remote teaching. And whether the fashion and restaurant industries can survive, or even whether cities themselves will survive.

For singles, even the mating game is in jeopardy: as a former student desperately searching for Ms. Right lamented, “You can’t really make a connection with someone over the internet the way you can over lunch.” People miss the banter among co-workers at the office and what might be called the creative combustion when trying to solve a problem. They complain of endless Zoom meetings and that they’re tired of talking to little squares instead of real people.

Let’s not wallow in our misery. Unlike the Black Plague that killed between 30% to 60% of Europe’s population in the 14th century (statistics weren’t very good back then), we know what caused this pandemic, and vaccines have been developed to counter it.

Remember that people are resilient, at least to a degree, and in every crisis there is opportunity if we look for it. Remote work will not, as some predict, destroy cities as people work from home while office buildings become empty hulks. Despite our distaste for sometimes inconsiderate neighbors and nostalgia for the good old days of wide open spaces, cities are perhaps the most environmentally sustainable way to house large numbers of people and also provide a clustering force for talent and innovation.

Certainly there is room for improvement: cities could be changed for the better. Urbanologists have suggested that the disruption caused by remote work gives us a rare opportunity to change those cities for better, more comfortable lifestyles that at the same time enable the economy to expand. Car-free streets in densely populated areas, already being tried in several large cities, can be expanded. Buildings that were formerly exclusively devoted to offices can be converted to mixed use areas where people can both live and work. This should make possible lower housing costs in densely populated cities like Tokyo and New York, where rents and purchase prices are currently beyond the reach of middle-class workers. For them, living within short distances of their work will reduce commuting time and cut down on pollution from their vehicles and public transportation.

Smaller cities can also prosper, with a kind of hub-and-spoke configuration taking place: smaller facilities in large, expensive cities and more work from nodes in suburban or exurban areas where employees might prefer to live and can more easily afford to. Restaurants will have their place in these smaller communities and, climate permitting, will have more outdoor dining facilities. The goal is “15 minute neighborhoods” whose residents can work, shop, take the children, to school, play, and worship within the area.

Nor will fashion disappear, though it may not look the same. One of the first manifestations of this was masks. Almost overnight, they were transformed from utilitarian white or blue to an astonishing variety of identity markers. Sports fans favored the masks of their favorite teams, world leaders advertised their patriotism though national flags, others donned those of superheroes and Halloween ghosts and goblins.

One fashionista sewed herself a mask with her favorite colors, then created a necklace of beads in the same shades so that the mask could hang around her neck for easy on and off as needed. Outfits once described as “athleisure” have now made their appearance on the runways of haute couture houses with softer, more flowingーand more comfortableー-silhouettes.

Even language has been energized through new vocabulary. “Quantini” is the drink you can have with friends, assuming you can find tables that allow six feet of distance. “Covidiot” and “maskhole” are for people you disagree with, and “travel shaming” is, well, travel shaming.

We shouldn’t expect this to happen quickly, and in the case of transforming canyons of high rise office buildings into mixed use areas with affordable housing, it will require a partnership among developers, urban planners, and governments at all levels.

Lamentable though the disruptions of 2020 have been, they’ve given us a once-in-a-lifetime chance for rejuvenation. Let’s not squander it. If I may suggest a word for 2021, it is kibou—hope.

Find other articles by Dr. June Teufel Dreyer here, on her author page.