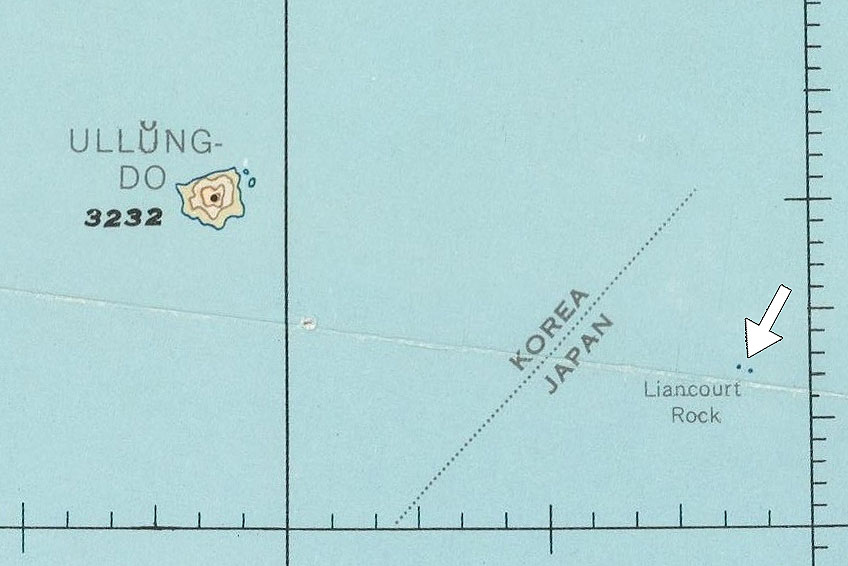 Nine navigational flight charts made by the United States government between 1955 and 1997, which a research group recently presented, confirm that Takeshima, a group of islets in the Sea of Japan, have always been part of Japan’s territory.

The Japanese islands, which are administratively part of the town of Okinoshima, Shimane Prefecture, were illegally seized and are currently occupied by South Korea.

The disclosure of the aeronautical charts came in a news conference held on December 11 in Matsue, the prefectural capital of Shimane. It was made by the Japan Institute of International Affairs (JIIA), a Tokyo-based incorporated public interest foundation that has been engaged in research activities on territorial issues.

The navigational flight charts of the U.S. Air Force (USAF) are considered a reflection of the content of the San Francisco Peace Treaty that took effect in 1952, and determinative that Takeshima is under the sovereignty of Japan.

JIIA engaged Associate Professor Rikinobu Funasugi, a specialist in historical geography at Shimane University, to conduct research on the USAF jet navigation charts. In the news conference, he explained that the charts are “an important material that reinforces the validity of the territorial arguments by the Japanese government” over the Takeshima issue.

A research company examined about 100 documentary items at the request of JIIA. These included jet navigation charts that were issued after World War II and kept at the U.S. National Archives and Records Administration in Washington, D.C. Associate Professor Funasugi analyzed the contents of the documents.

The charts found this time are revised editions of the USAF Jet Navigation Chart specifying the island of Takeshima as part of Japan’s territory. The chart, first worked out in 1954 on a scale of 1:2 million, was revealed by JIIA on October 23, 2020. The latest of the confirmed editions dates to 1997, according to the associate professor.

Of the nine charts, he said, seven compiled during the period from 1955 to 1975 had a dotted line between Takeshima and South Korea’s island of Utsuryo (Ulleung in Korean) with the word JAPAN written on the side of Takeshima, in contrast to KOREA on the side of Utsuryo. He added that the legends of the aerial charts indicated that the dotted line depicted the “boundary of the scopes of sovereignty of islands.”

Two charts — one made in 1985 and the other in 1997 — lacked the dotted line between Takeshima and Utsuryo islands, but Takeshima was accompanied by the country name of JAPAN directly alongside it, and Utsuryo by the name of SOUTH KOREA, Associate Professor Funasugi said.

According to South Korean news agency Yonhap, Seoul had a counter-argument on the dotted line in the 1954 flight chart revealed by the JIIA on October 23. It claimed that the dotted line was “for the purpose of defining directions, not a boundary.” However, the navigational charts that show Takeshima directly coupled with the denomination JAPAN serve as key material for denying the South Korean claim, Funasugi declared.

According to Associate Professor Funasugi, U.S. aeronautical charts dated before the 1952 San Francisco Peace Treaty did not include dotted lines, reinforcing the view that “the [1955-1997] charts reflect the contents of the treaty.” He added, “This is important material that suggests that the United States, the country responsible for drafting the San Francisco Peace Treaty, was consistent in its recognition of Takeshima as part of Japan’s territory.”

South Korea has claimed that Takeshima (Korean name is Dokdo) “has been recognized under the treaty as an islet geographically attached to the island of Ulleung that is part of South Korean territory.”

The Japanese government has said that the areas that Japan relinquished under the treaty are those of Korea, which included the island of Saishuto (Jeju in Korean), Kyobunto (Geomundo), and Ulleung, but not Takeshima, which Tokyo asserts is under Japan’s sovereignty.

(Find access to the original report in Japanese here.)