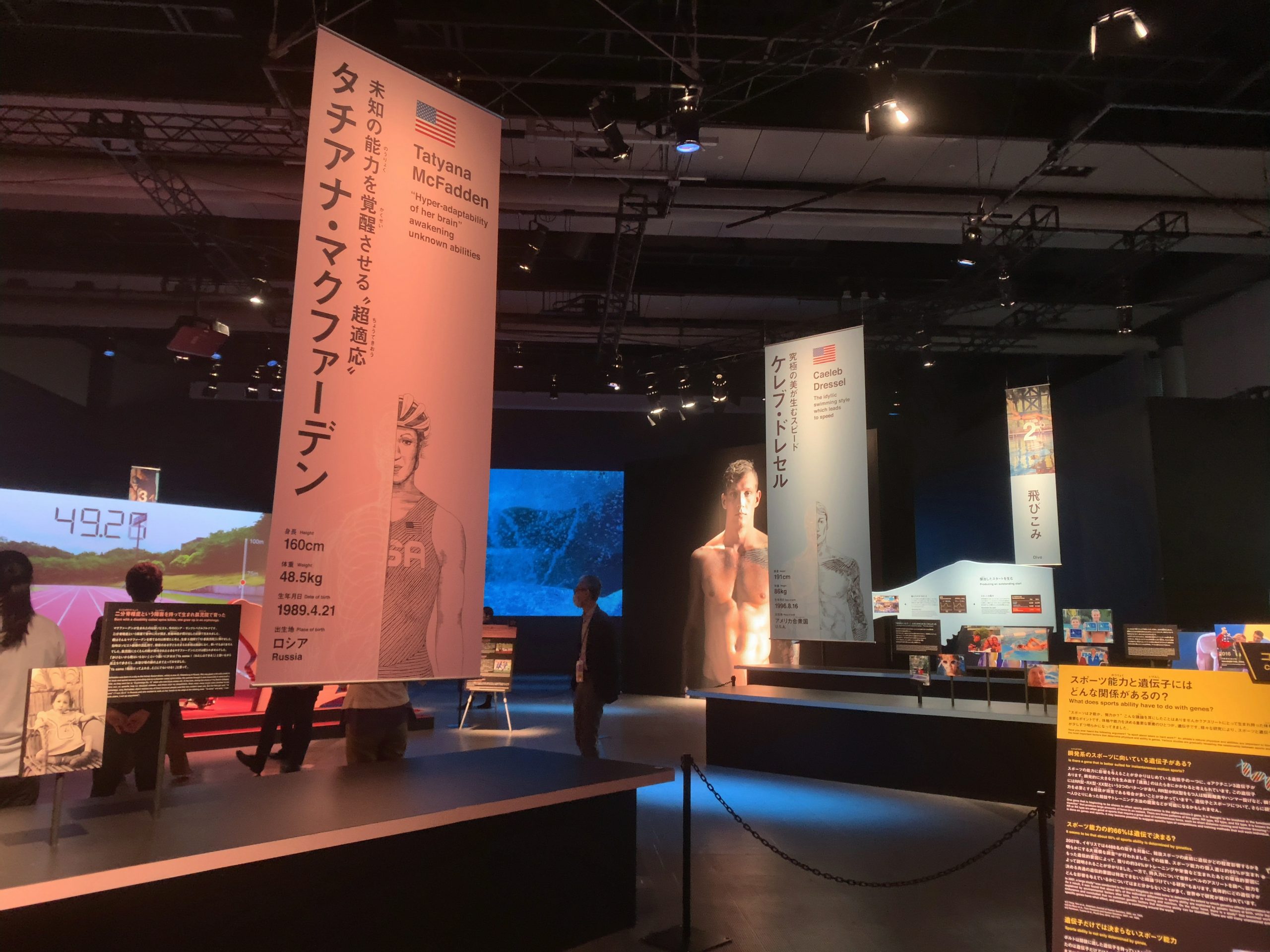 During the Tokyo Olympics, athletes will have an opportunity to showcase their talents, which in many cases might seem even superhuman.

The special exhibit Superhuman: “This is my body” organized jointly by NHK and the Miraikan in Odaiba, Tokyo, highlights the extraordinary traits of three athletes ー sprinter Usain Bolt, track and field athlete Tatyana McFadden, and swimmer Caeleb Dressel.

Three sections are dedicated to showcasing each athlete’s characteristics.

The Superhuman Steps of Usain Bolt

For Bolt, the exhibit highlights his unique upper body, lower body, muscle strength, and running form. A spotlight is placed on the fact that Bolt has scoliosis, a medical condition in which the spine bends sideways, which is made extremely clear to visitors through a projection of MRI data onto a model of his body.

The exhibit notes that “these symptoms can cause a large handicap.” However, it can quickly be seen that Bolt has not only overcome the challenges of scoliosis, but that to him, it is an advantage. His condition causes an extraordinarily long left stride, giving more power to each step.

His muscular strength is also a crucial contributor to his speed. The muscles in his arms balance his body as he is running, playing a part in creating long strides, and his leg muscles power his running.

Visitors to the exhibit can see exactly how remarkable Bolt’s thigh strength is in particular. There is even an opportunity to compare your strength to his, by measuring the force your leg can exert on a cable attached to your lower leg while sitting down.

For McFadden, a wheelchair track and field Paralympian, the focus is on her muscles, brain, and endurance. The exhibit articulates the muscle group around the shoulders that powers her and shows in what ways her muscles are extremely well-developed.

A scan of McFadden’s brain also shows that it has adapted to her disability. It was discovered that when moving her arms, she was using the same portion of the brain that a non-disabled person would use to control their legs.

Further, the parts of the brain that are used for controlling her arms and torso have unusually overlapped with the portion of the brain controlling the legs, allowing for a more cohesive motion during races.

In addition to the traits that make McFadden unique, the exhibit also touches on the intricacies that are part of competitions that disabled athletes take part in, such as the classification system for paralympic athletes and the ways that fair competitions are ensured.

There is also a display of the type of wheelchair used by McFadden during her races, as well as an opportunity to try it out and experience the speed of McFadden’s record-breaking 100 meter sprint.

Breathe In the World of Caeleb Dressel

Finally, the exhibit highlights Dressel’s breathing, jumping and jumping strength, and movement through water of this Olympic swimmer.

Videos of Dressel swimming, taken with an underwater camera, are on display on a 14 meter wide screen. The videos show off both the artistic nature of Dressel’s motion through water, as well as his muscular strength.

One advantage that Dressel has is a sternocleidomastoid muscle 1.5 times larger than the typical athlete. This muscle is located in the neck and is usually only used for breathing during extreme exercise. In Dressel’s case, however, this muscle is being used even during regular exercise, letting more oxygen into his lungs and giving him an advantage.

There is also a focus on his jumping strength. Scientists measured the force of his kick against the starting block to be 106.2 kilograms, about 28 kilograms above a typical world-class athlete. This gives him a large advantage against his competitors, particularly at the beginning of races.

The height that Dressel can jump to while keeping his legs straight is marked on a wall. Visitors to the exhibit are invited to see if they measure up to it.

Ultimately, a major characteristic these athletes share in common is their spirit in regards to their sport. This is the final trait highlighted for each athlete.

All three of the athletes have unique bodies that they use to their advantage to become the top performers in their given competitions.

The final corner of the exhibit consists of a theater playing a video entitled “Moment of SuperHuman,” which highlights the instants that each of the three spotlighted athletes enter into the superhuman realm.

It is a moment that the organizers of the exhibit call “when the human body shines with an unknown radiance.”

The exhibit is open until September 5, 2021 at the Miraikan – The National Museum of Emerging Science and Innovation.

Information about the Miraikan, including hours and access, can be found here.