Discovering Kintsugi and the Pride of Japanese Craftsmen 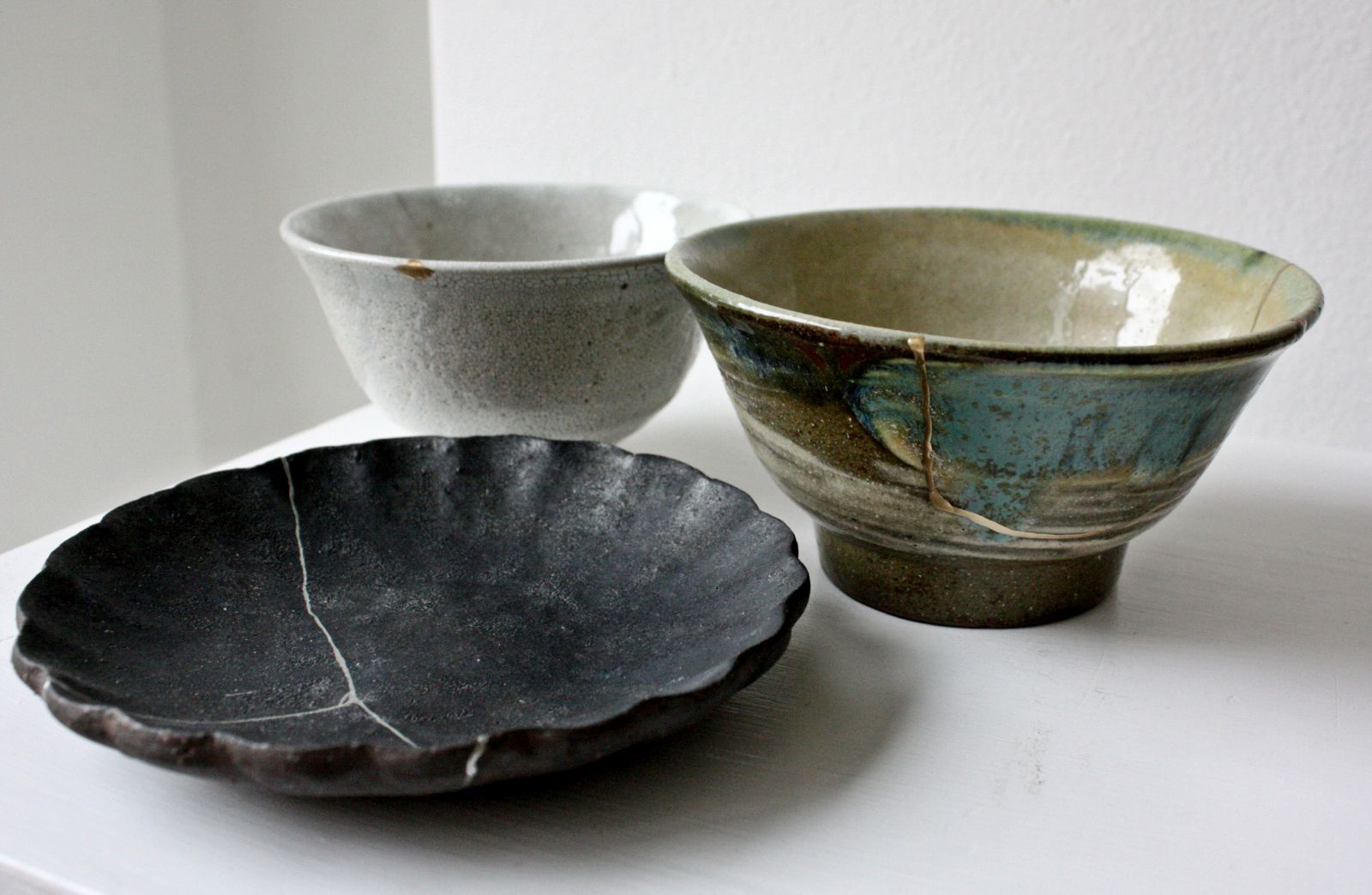 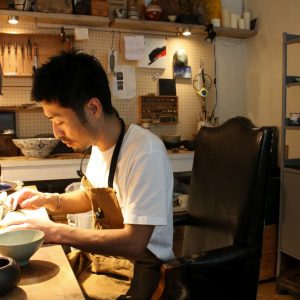 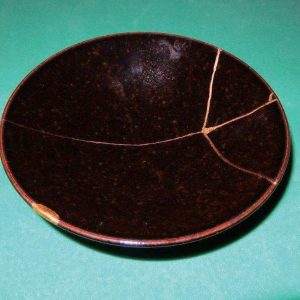 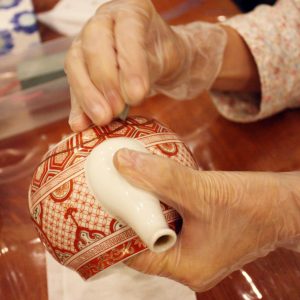 Centuries ago, a luxurious way of repairing ceramics emerged in Japan: kintsugi.

The technique involves bonding cracked ceramic pieces with lacquer and dusting the cracks with gold. In Japanese, the word literally means “golden joinery.”

Ceramic pieces repaired with kintsugi are stunning. In the United States, the tendency might be to fix a broken teacup with super glue and do our best to conceal the crack. Kintsugi results in the exact opposite effect. The gold glistens and accentuates the crack, making it almost part of the design. A finished kintsugi piece is arguably even more beautiful than the original.

A (Brief) History of Kintsugi

I first learned about kintsugi in an East Asian art history class in college. I remember sitting in a dark lecture hall seeing slides of museum cases displaying ancient tea bowls sparkling with spidery gold veins. I loved the effect and wanted a piece repaired with kintsugi for myself.

Legend has it that in the late 15th century, the Japanese shogun Ashikaga Yoshimasa sent a damaged tea bowl back to China for repairs. The bowl returned repaired clumsily with metal staples. That inspired Japanese craftsmen to look for a more aesthetic method of repairing broken ceramic objects, and thus kintsugi was born.

My Own Kintsugi Project

For years, I was mesmerized by the effect of kintsugi and convinced that I had nothing precious enough to repair that way. After all, unless the cup or bowl is very expensive, the repair will likely cost significantly more than the original object itself. My collection of mugs purchased at Ikea and Daiso hardly seemed worthy of such a luxurious treatment.

Also, if you think about it, kintsugi requires a bit of luck. It requires a ceramic object that you treasure to crack into fragments, but not shatter.

For the less patient among us, one workaround is to help the process along a little. I once found directions for creating kintsugi-style Christmas ornaments. The first step of the project called for gently tapping glass Christmas balls with a hammer until the balls broke.

It seems this is not a new impulse. Indeed, even back in the 15th century when kintsugi was first developed, collectors were apparently so obsessed with the effect that some deliberately smashed their pottery so that it could be repaired with kintsugi.

Fortunately, I did not have to go smashing all my dishware. I happened to get lucky with a pair of mugs that my older brother gave me. The mugs were hand-thrown by an artist in Brooklyn, New York — Yuko Nishikawa. I used the mugs for years, enjoying coffee in the morning and tea at night. A shadowy smudge developed on the edge where my lips always touched.

Then one day, when I was washing the mug, I heard a slight rattling sound like the mug had cracked. Indeed, it had broken.

I was simultaneously disappointed and pleased. I knew that I had found my perfect kintsugi project. The mugs were handmade, so there was no way I could buy a replacement. On my next trip to Japan, I carefully packed the mug into a box and started looking for a kintsugi repair studio.

Getting Your Piece Repaired

The process of having my mug professionally repaired using kintsugi was fairly simple.

Initial request: First, I wrote to the studio, explaining that I wanted to have my mug repaired. I explained the history of the object and the extent of damage. I was not sure if the mug could be repaired since it was not fully cracked through. The hairline crack was almost invisible to the naked eye.

Discussion of customized options: An expert kintsugi artist at the studio wrote back that the mug could likely be repaired, but, to be certain, they requested that I send along photos of the mug showing the crack in detail. After seeing the photos, the staff person confirmed that it could be repaired. Various options were offered, which differed in terms of the material used for the initial repair (ceramic versus resin) and the final coating material brushed over the crack. In the end, I chose a resin repair finished with gold dust mixed with tin dust. The final repair cost slightly over JPY10,000 (about USD100) and took approximately one and a half months.

Drop off and repair: I visited the shop’s studio near Shibuya to drop off my mug. The staff with whom I had been corresponding looked at the mug with me and we discussed a few final options in terms of the exact color of the finished kintsugi. Several few weeks later it arrived in the mail, beautifully protected in layers of bubble wrap.

I could not be happier with the repair.

Kintsugi — Just One of Many Japanese Repair Arts

The kintsugi technique appears to be attracting attention outside Japan. Indeed, when I visited the kintsugi studio in Tokyo to drop off my mug, I was one of about 10 visitors in the shop. I heard English, German, and other languages. There were no Japanese customers in sight.

In articles written about kintsugi, the technique is often praised for representing the Japanese philosophy of treasuring imperfections. Parallels have been drawn between kintsugi and the concept in Japan of wabi-sabi, an embracing of the flawed. Cracks are simply a moment in an object’s life, much like fate might bring hardships in the life of humans.

I certainly do not pretend to be an expert in kintsugi and I cannot speak directly to the intentions of Japanese craftsmen in the 15th century when they developed the technique. However, the legend surrounding kintsugi suggests that the technique developed at least partially for aesthetic reasons.

Judging by the impulse of collectors to purposefully smash their own pottery, part of the appeal of kintsugi is the sheer beauty of the resulting object itself. With this, I cannot argue. The appearance of kintsugi — before any lessons in life philosophy — is what originally drew me to the technique.

I hesitate to say that kintsugi has taught me to treasure the “cracks” in my own existence. However, it has taught me try to repair things before I throw them away.

Here are some other ways from Japan to extend the life of your objects.

Although denim originated in the United States, Japanese denim has a reputation for being among the best in the world. However, even premium Japanese denim can wear out, becoming thin and developing holes. Some denim makers will use a darning machine essentially to re-weave material across the hole, rebuilding the fabric of the jean itself.

For those who want to try this at home, you do not need a specialized darning machine. You can approximate this technique with a regular sewing machine. Find a thread that closely matches the color of your jeans. Then slowly build up lines of stitching, working perpendicular to the direction of the weave. Stitch beyond the hole itself to strengthen the area around the hole as well. Then switch to building up lines of stitching in the direction of the weave, blending with the material around. If the hole is very large, you might need to add backing fabric behind the hole to stabilize the repair.

Boro stitching is another beautiful way to repair textiles. Much like kintsugi, the stitches used to repair the cloth are visible, becoming part of its design and beauty. You can get started with boro stitching with just a few simple tools.

Ask the Shop Where You Bought It

Some stores (though not all) offer services to repair objects years after you bought them. I have long been impressed by the commitment of craftspeople in Japan to helping to ensure that the objects they make enjoy many years of use.

In Kyoto, the shop ICHIZAWA SHINZABURO HANPU offers exquisitely crafted canvas bags. The designs are simple but beautifully honest. The store promises to try to repair worn out bags, writing that the craftspeople “gently and carefully repair [the bags] wondering all the while as to the shared memories of the bags and their owners, wishing with all their heart a new start and new memories for them.”

The repairs generally take one to two months and serve as a demonstration of the technique of the craftspeople. Some sample repairs can be seen on their website.

Check out the various techniques available as there are repair methods for everyone’s preferences.

The shop also offers a one-day kintsugi workshop for visitors to Japan.

Jessy LeClair is a lifelong Japan fan. She has made over ten trips to Japan, including on a Fulbright Fellowship to Kyoto University. She holds a PhD in Psychology with a focus on cultural influence from the University of California, Santa Barbara. When not working, Jessy enjoys visiting her local farmer’s market for fresh, local vegetables.