Dripping with Irony and Yet Lyrical: How Cartoonist Taco Lin’s Satire is Very Much Like Taiwan 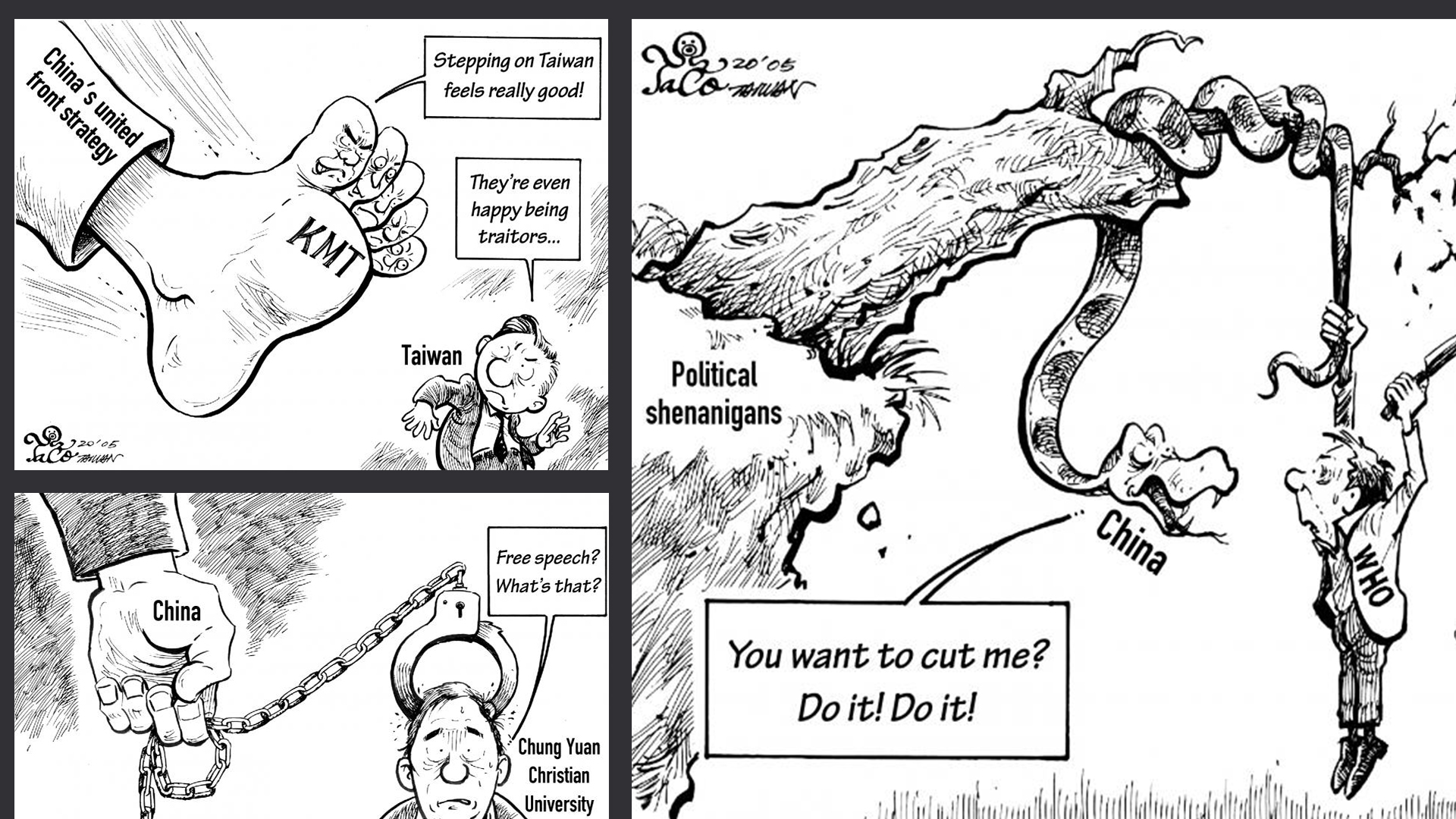 The outbreak of the novel coronavirus from Wuhan in late 2019 has thrown the world into a frenzy, and individuals, business, and governments have been scrambling to respond. Some have chosen to grovel to the People’s Republic of China, whose cover-up of the growing epidemic caused untold suffering in the PRC and around the globe. Some have taken a hard line against the communist dictatorship, demanding compensation for trillions of dollars in damages.

Taco Lin’s trenchant humor, lampooning the deadly follies of some of the most murderous tyrants on the planet, has won praise from many quarters during the China-bug pandemic. Using expressive, elegant brushstrokes and displaying a masterly balance of black ink and white space on the page, Lin’s cartoons — which typically contain just a few well-chosen English words — speak volumes about what is really going on with China.

Lin himself is a witness to the courage of a Taiwanese citizen — there are millions of Taiwanese like him — in standing up to a regime that daily threatens to invade his homeland. Behind the mordant, biting wit of Lin’s cartoons is a man of quiet principle who has made it his life’s work to resist oppression with the one weapon that every dictator fears most: laughter.

The Truth of Taiwan

Taco Lin’s laughter is rooted in a commitment to telling the truth. And the truth is that Taiwan is not and has never been Chinese. As Lin recounts, he was born in central Taiwan in 1955, to parents who had been — like former president Lee Teng-hui — Japanese before the fall of the Japanese Empire in 1945. Then the Nationalists under Chiang Kai-shek invaded the island of Taiwan and tried to impose Chineseness on the people there.

Lin recalls that his parents spoke to one another in Japanese, spoke in Taiwanese to him, and then, after the Nationalist takeover, were forced to learn Mandarin. Lin speaks of the “resentment, helplessness, and sorrow of modern Taiwanese.”

Lin had a profound distaste for the Kuomintang (KMT) takeover of his home country, and tried to “escape,” as he says, into his talent for art, attempting to avoid the university system, which was co-opted by the KMT and the politicization of Taiwan. Eventually, to his great regret, Lin was forced to put his painting skills to work producing military propaganda for the Nationalists.

After managing to escape this life of ideological imprisonment, Lin became the art editor of a Chinese newspaper. It was here that he honed his gift for humorous dissent, speaking out against the very people who had overrun his beloved Taiwan and forced its people to acquiesce in a propaganda campaign. Through the cartoonist’s pen, Lin expressed his feelings of hurt and bewilderment.

‘Why Did Japan Abandon Us?’

Not all of his misgivings were directed at the KMT and the mainland Chinese, however. Lin also has a hard time understanding how the former Japanese Empire so easily abandoned her subjects in Taiwan. Lin claims that his grandparents appeared crushed by the news and never really recovered from the blow.

Lin acknowledges the good relationship now between Taiwan and Japan, and is grateful for it. But at the same time he remembers the sense of abandonment that earlier generations felt — they were Japanese, too, but unlike others in the far flung empire, they were not welcomed back after the war.

Lin’s special contempt is reserved for the communists in the PRC, however. He looks back with scorn on the hundred-year “revolution” in China, which, Lin says, has done nothing but make the rich richer, inequality worse, and the politicians even more corrupt than before.

Lin longs for a European Union-style relationship between Taiwan and Japan to stand up to the horrors that communism brings. Japan, what Lin calls a “kind but distant country,” is a place he would like to visit someday, returning to the land to which his ancestors once belonged.

Getting to Know Taiwan

For now, Lin continues to express his rich, poetic views of the world mainly through his art. Lin’s cartoons are classics of the genre of satire. Dripping with irony and yet lyrical in their denunciation of all that is fake and threatening in the world, Lin’s art is very much like Taiwan itself: brave, defiant, wary, and yet approachable and warm.