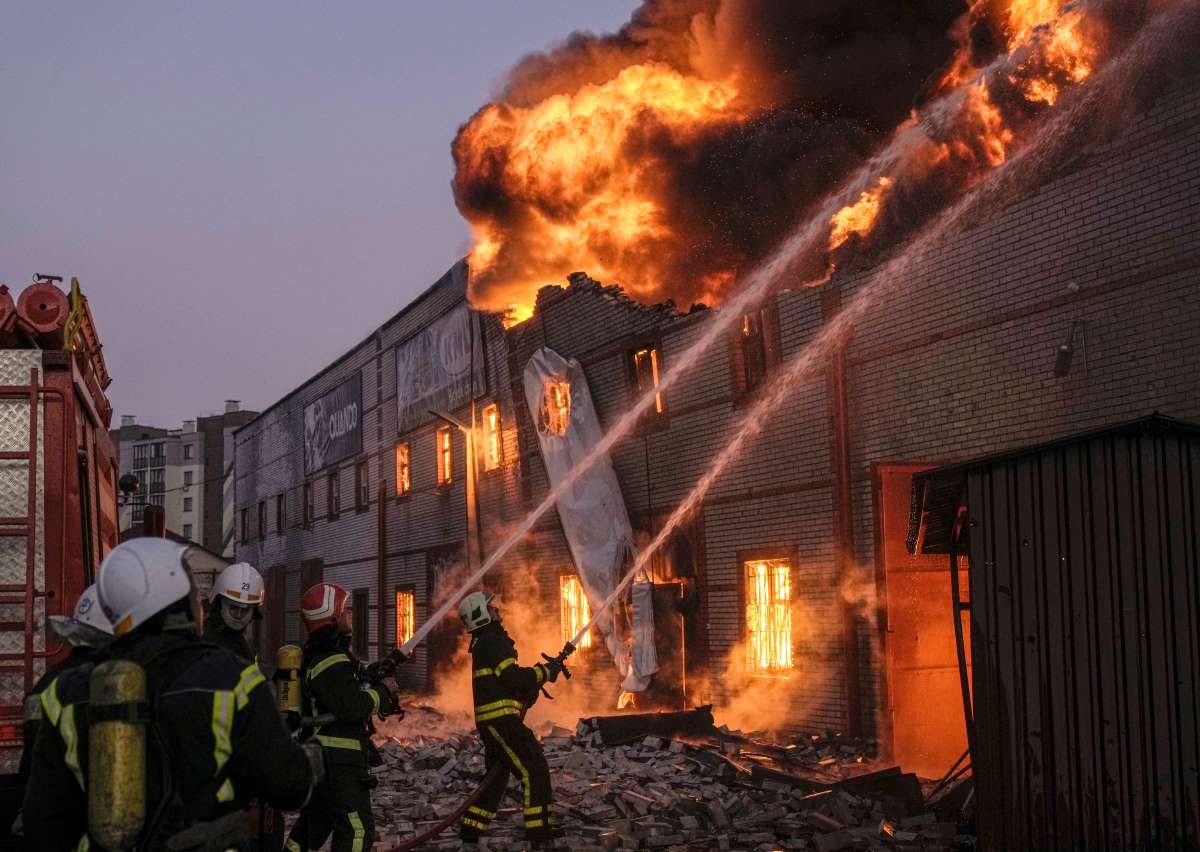 Ukrainian firefighters extinguish a blaze at a warehouse after a bombing in Kyiv, Ukraine, Thursday, March 17, 2022. (AP Photo/Vadim Ghirda)

Russia’s unprovoked invasion of Ukraine is sending energy prices soaring on global markets, and Japan is seriously impacted. As part of a series of sanctions against Russia taken by the international community, many countries are halting energy imports from that country and the search for alternate supplies is expanding.

These developments are fueling the rise in energy prices.

Despite these international conditions, the Japanese government and ruling parties do not seem to have a sense of crisis.

Although measures have been taken to control prices of petroleum products, such as releasing petroleum reserves and providing gas subsidies, they are limited to near-term countermeasures to soaring costs. There is no evidence of radical policies to ensure Japan has a stable supply of energy.


Time to Face the National Crisis

The first thing needed is acute recognition that Japan now faces a national energy crisis. In addition, in order to ensure a stable procurement of energy resources and a steady supply of electrical power, the government and ruling party must lead the country in shifting to an emergency energy policy, including steps such as facilitating the restart of Japan’s nuclear power plants as soon as possible.

Russia’s ongoing military assault on Ukraine is prompting the international community to reinforce sanctions on that country. In the field of energy, the United States and the United Kingdom say they are halting Russian imports, including petroleum and natural gas imports. The EU is also aiming to reduce its imports from Russia by 60% this year, and totally stop them by the end of 2027.

Japan too is participating in the sanctions, but has not committed to suspending Russian energy imports. Prime Minister Fumio Kishida would only go so far as to say that Japan will coordinate with the G7 industrialized nations while considering its own national security.

There is obvious concern that if Japan were to halt Russian imports, which for example account for eight percent of the country’s consumption of liquefied natural gas (LNG) and thirteen percent of its coal, it would face energy procurement difficulties. Nonetheless, if Japan were to give priority to avoiding taking actions that hurt its own interests, it will only end up rupturing the international solidarity of sanctions on Russia.

Although Germany has relied on Russia for over half the LNG it consumes, it has pledged to cut its imports as the international community continues to stiffen its sanction posture towards Moscow. If Japan fails to act in concert with its allies, it will inevitably lose the trust of the global community.

It is impossible to foresee the outcome of the Ukraine invasion. Nevertheless, it would be a mistake to believe that Russia’s ties to the international community will be restored in the near future. Russia’s violations of international law have been flagrant, and future avoidance of Russian products from the standpoint of human rights is certain to become a global issue. It would be overly optimistic to expect the continuance of our Russia trade.

We must be prepared for a lengthy global energy crisis. The prices of natural resources are soaring. The burden on the Japanese people for the soaring costs of such necessities as utilities using gas and electricity, as well as gasoline and kerosene, will surely become heavier. If the government does not react nimbly, then Japan will not be able to realize self-reliant energy security.

First, we would like to see Japan make the political decision to terminate energy imports from Russia. And we want Prime Minister Kishida to show leadership by actively engaging in resource diplomacy to establish substitute sources of procurement.

With the United States aiming to increase shale oil output, measures to support investment by Japanese firms in that sector are indispensable.

At the same time, if we are to secure a stable supply of energy, the government must take the lead in restarting idled nuclear power plants.

Since the March 2011 disaster at the Tokyo Electric Power Co.’s Fukushima No. 1 Nuclear Power Plant, only ten of Japan’s 33 nuclear power facilities have been brought back on line even once. And of these, five are currently shut down for periodic inspections or other reasons. These offline power plants need to be restarted as soon as possible.

Prime Minister Kishida should take the lead in ensuring that Japan has a stable supply of electrical power and that it comes up with imaginative ways to respond nimbly to the situation. For example, why not temporarily restart operations at nuclear power plants which have already undergone safety reviews by the Nuclear Regulation Authority (NRA)? Flexibility concerning the new regulatory standards for nuclear power plants, such as authorizing construction for safety purposes even while a plant is in operation, are also essential.

The Liberal Democratic Party’s Parliamentary Association for the Promotion of a Stable Electrical Power Supply has adopted a resolution calling for emergency restarting of nuclear power plants. The group says that in order to deal with soaring crude oil prices the government needs to prioritize safety, including for nuclear power facilities currently offline, while taking steps to urgently bring nuclear power plants online.

We would hope that the LDP will use its political clout for the sake of the nation and not leave everything to government agencies.

Calls are also starting to be heard from Japan’s business community for the government to restart the nuclear power plants as soon as possible. The Kansai Economic Federation (Kankeiren), for one, has called for a large increase in the number of plant inspectors so that the NRA can expedite safety inspections. It also wants more outreach efforts to be made to win the understanding of local authorities in areas where the plants are located, and other concrete steps to get shut down nuclear power plants up and running again.

We would like to see the business community doing more to convey its sense of crisis to the general public.

If Prime Minister Kishida, government officials and the ruling parties continue to maintain the status quo out of fear of a backlash in public opinion, Japan’s precarious energy security will face an even greater crisis. These times call for prompt imaginative policy initiatives which are not captive to conventional thinking and regulations.