[Asia’s Next Page] Kishida in Cambodia: Seeking Regional Consensus Amid the China Threat? 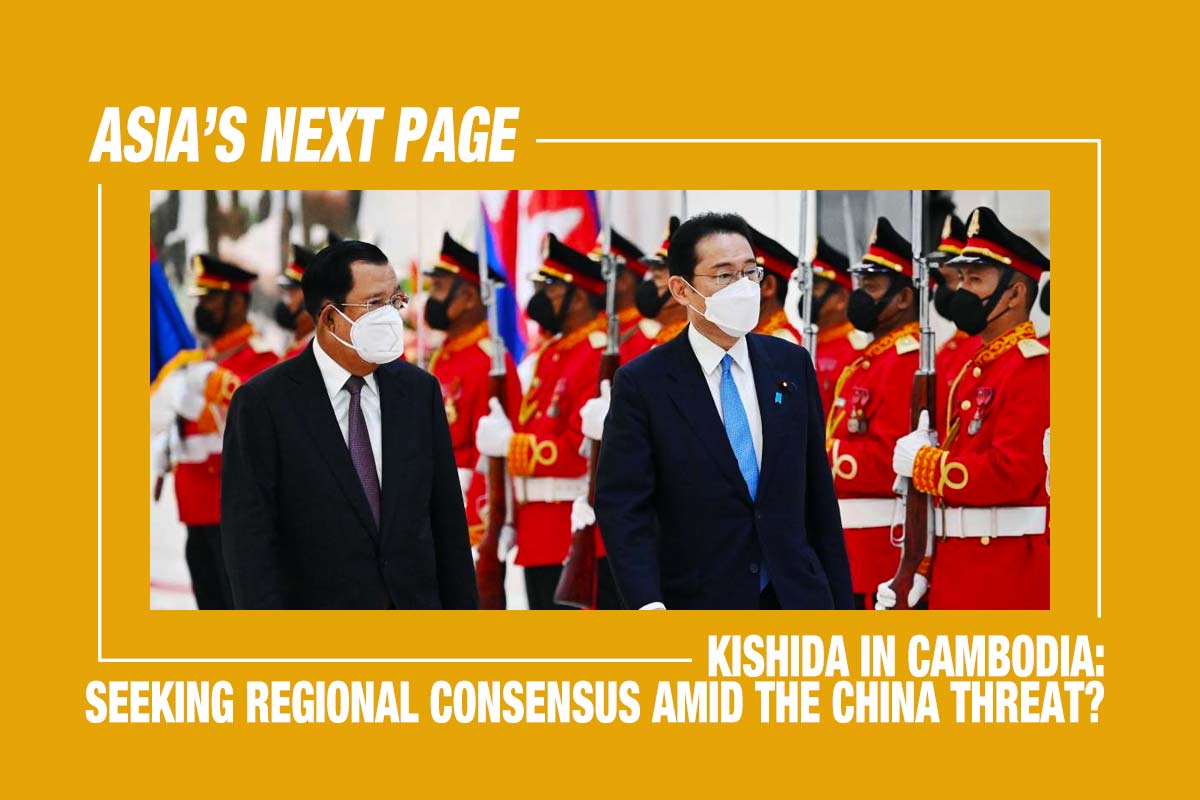 Last of a two part series on Prime Minister Fumio Kishida’s travel to India and Cambodia in March 2022.

Japanese Prime Minister Fumio Kishida is bringing a personal touch to his diplomacy with visits to India and Cambodia on March 19-21.

Kishida’s trip to India comes against the backdrop of a fractured Quadrilateral Security Dialogue (Quad) partnership over the Ukraine crisis. Kishida hopes to use the “eleventh hour” India trip to refocus confidence in their Special Strategic and Global Partnership.

Following this, he is visiting Cambodia – the current chair of the Association of Southeast Asian Nations (ASEAN) – to strengthen Japan’s cooperation with the region. He will also reinforce Tokyo’s commitment to ASEAN centrality during the already intensified current geopolitical turmoil.

Can Japan catalyze Cambodia to effect reasonable consensus among ASEAN members so as to maintain the relevance of ASEAN centrality?  Will Tokyo be able to capitalize on China’s fading aura in Cambodia due to the large-scale Belt and Road Initiative (BRI) debt?

Cambodia has longstanding ties with Japan that have allowed Tokyo immense political and economic clout in the country. Japan not only actively contributed to bringing the Cambodian civil war to an end in the lead up to the Paris Peace Agreement (1991), but also brokered a ceasefire between the ruling Cambodian People’s Party and the royalist FUNCIPEC party post the 1998 violence in Phnom Penh, which enabled reasonably free and fair elections. Kishida’s present visit looks to draw on such rich history and his expertise as Japan’s longest-serving foreign minister to strengthen Japan-ASEAN ties and discuss a unified response toward Russia’s Ukraine invasion.

Visiting Cambodia as ASEAN Chair is a key variable at a time of budding differences over Russia between Japan and its Asian partners. The timing of the visit and its combination with steadfast partner India indicates that Tokyo considers Cambodia a critical player in Japan’s outreach to Southeast Asia.

ASEAN centrality is essential to Japan’s Free and Open Indo-Pacific (FOIP) policy. It has found synergy in the Quad and helped shape global projects like the Expanded Partnership for Quality Infrastructure (EPQI). Notably, former Prime Minister Yoshihide Suga followed a similar strategy in picking then ASEAN Chair Vietnam for his first state visit – like his predecessor, Shinzo Abe.

Largely focused on handling the political crisis in Myanmar since the February 2021 coup, ASEAN only broke its silence on Ukraine under international pressure. Russia has consistently remained one of ASEAN’s top-ten trade partners and foreign direct investors, with some ASEAN states increasingly dependent on Russian oil exports. Vietnam remains Russia’s fifth-largest arms purchaser, while Singapore’s total trade with Russia is less than one percent. Such a wide berth of the relationship spectrum has led to a rather bland reaction by ASEAN.

However, Japan, which has taken a hard-line stance against Russia over Ukraine, is now seeking ASEAN’s support for action-oriented policies against Moscow. Tokyo recognizes that ASEAN has much to offer in standing against Russia’s invasion, beyond its current (rather weak) stance of calling for a ceasefire via an ASEAN foreign ministers’ statement. As ASEAN’s Chair for this pivotal year, Japan hopes to convince Cambodia to act as mediator in building a stronger ASEAN response to Russia – in a bid to also seek unity against potential unilateral actions in Asia.

As a centrally located ASEAN state bordering Thailand, Vietnam, and Lao PDR ー that along with China and Myanmar comprise the Great Mekong Economic Zone ー Cambodia has great strategic significance in the Indo-Pacific power dynamics.

In 2022, Cambodia is serving as ASEAN chair for the third time (2002 and 2012 were the other years). The crisis in Myanmar, which has been conspicuous by its absence in meetings, has dominated the ASEAN proceedings so far. Starting the negotiations for a binding Code of Conduct (CoC) for the South China Sea and building consensus on global conflicts involving major Indo-Pacific stakeholders, such as the Ukraine crisis, would be a real test for Cambodia’s role in maintaining ASEAN centrality in the region.

Moreover, with the Indo-Pacific becoming the principal theater for swiftly intensifying great power contention, ASEAN is now a significant player in regional, if not global, geopolitics. Yet, ASEAN, which comprises small and middle economic power states with varied perspectives and national interests, is limited by such divergence to bring about unanimous change swiftly and effectively.

Despite the difficult and inefficient decision-making process, an enhanced global status due to the region’s growing strategic and economic importance has been guiding the bloc’s strategy. Cambodia’s role assumes greater relevance as it is not only chairing the bloc but is also seen as a close partner for China.

Both India and Japan are strong supporters of “ASEAN centrality,” which has found a prominent place in all the Indo-Pacific alliances (e.g. Quad) and vision documents (e.g. Global Gateway). In balancing the growing Sino-US rivalry, too, wherein many ASEAN states have found themselves entrapped, India and Japan both emerge as reliable partners.

Nonetheless, it must be pointed that Cambodia faced criticism during its 2012 chairmanship, when ASEAN did not issue a joint statement for the first time in 45 years because of disagreements over the South China Sea CoC. Cambodia was blamed at the time for allying with Beijing.

Already, critics have rebuked the Cambodian Prime Minister Hun Sen, who is styling himself as a peacemaker, for meeting with the Myanmar junta leader in January this year. So how far will this term ease the regional political turmoil is anybody’s guess. But Kishida’s visit could hopefully act as a catalyst for pushing ASEAN, and Hun Sen who already seems to be biding time, into taking meaningful action on controversial, divisive issues.


Countering the Beijing Breeze in Cambodia?

Joining the BRI in 2017, Cambodia brought a new ambit to the Japan-Cambodia bilateral, greatly impacting ties with Japan in recent years. Cambodia has found itself in a tough position amidst growing Japan-China tensions over the Senkaku Islands.

Being a small country, Cambodia is dependent on both Tokyo and Beijing for economic aid, even as it struggles against a potential “debt trap” due to BRI loans. In 2021, China’s share in Cambodia’s foreign debt was 43.78 percent.

Japan, however, has long been Cambodia’s top donor and a trustworthy aid partner. Tokyo’s investment in Cambodia peaked at $2.5 billion USD in the past 15 years. Kishida’s visit can thus be an opportunity for Japan to pursue a long-game in Cambodia. Simultaneously, Cambodia can court new financing and repair damaged ties with the West as it looks to break out of its BRI-induced debt distress. The latter will not be easy at a time when the COVID pandemic and the volatile global geopolitics have already caused unprecedented economic uncertainty.

As Cambodia re-evaluates its BRI burden, it wants to rebuild ties with the United States, and Japan emerges as the natural mediator. For Tokyo, it is a chance to oppose the BRI by promoting its EPQI and build on the already established KUSANONE program (Grant Assistance for Grass-Roots Human Security Projects) in Cambodia’s infrastructure development. In 2021 alone, Tokyo approved $368,478 USD  to support four road and health infrastructure projects in Cambodia, $600,000 USD in grant aid to build infrastructure in Pailin, Kampong Thom, and Svay Rieng provinces,and $500,000 USD for other development projects in five provinces.

Now, following Russia’s autocratic actions, concerns are rising over China taking action against Taiwan, or in the Indian Ocean and South and East China Seas. Kishida hopes to get Cambodia to stand true to the recent Phnom Penh-Tokyo decision to affirm security cooperation in the Indo-Pacific, supporting the free and open Indo-Pacific vision.

Over the years, Cambodia has employed the “hedging strategy” in the Japan-China rivalry for regional supremacy. It is therefore unlikely that Cambodia will support Japan on the East China Sea conflict. What Japan will be hoping from this visit by Prime Minister Kishida is to strengthen their “strategic partnership” and boost defense cooperation.

Another peripheral aim could be to introduce India as a third partner, building a new trilateral in the region to advance economic, defense, and diplomatic development. India already maintains warm and cordial relations with Cambodia via its Act East Policy and complete support of ASEAN centrality. Kishida, by combining the two visits, highlights the importance Japan accords to India and ASEAN states, which have been strategically silent on Ukraine, in the security architecture of the Indo-Pacific.

And Cambodia as ASEAN chair will be the focus of Kishida’s regional foreign policy outlook in 2022.

Dr. Jagannath Panda is the Head of the Stockholm Centre for South Asian and Indo-Pacific Affairs (SCSA-IPA) at the Institute for Security and Development Policy (ISDP), Sweden. Dr. Panda is also the Director for Europe-Asia Research Cooperation at the Yokosuka Council of Asia-Pacific Studies (YCAPS); a Senior Fellow at The Hague Centre for Strategic Studies; an International Research Fellow at The Canon Institute for Global Studies (CIGS), Japan; and a Senior Fellow at the East Asian Security Centre, Bond University, Australia. He is also the Series Editor for Routledge Studies on Think Asia.